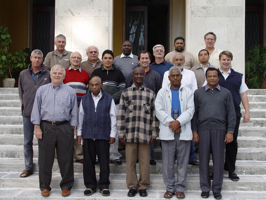 Convened by the General Service of Justice, Peace and Integrity of Creation the following Oblates met in Rome on October 20-25th 2009.

The JPIC Vision/Mission Statement as well as “Essentials for JPIC Animation” will be posted on our website: www.omi-jpic.org. Working groups are preparing a document to be presented to the Chapter Commission.

We affirmed that one of the biggest challenges we face today is to live in right relationship among ourselves, with all peoples and with the whole of creation in a sustainable and reverent manner. That statement as well as the reaffirmation of all JPIC ministries that Oblates are involved in at many different levels guided us in setting the following priorities:

As Oblates with a mission to work with the most abandoned in whatever form or situation, we affirm that every person is created in the image and likeness of God. We are committed to work especially in promoting the rights of all people, as individuals and as communities, with special emphasis on Indigenous Peoples and migrants. All people should be respected and have access to basic human needs as well as enjoy the free exercise of civic, political and cultural rights, and a healthy community to live in.

A Commitment to Reconciliation

1. Identifying and acknowledging the nature of the historical divisions and animosity which exists between regions, countries, ethnic and racial groups, and

2. Exploring opportunities and learning tools and processes that can make a positive contribution to the peacemaking process, our commitment to reconciliation includes the following actions:

An emphasis on Education and Formation