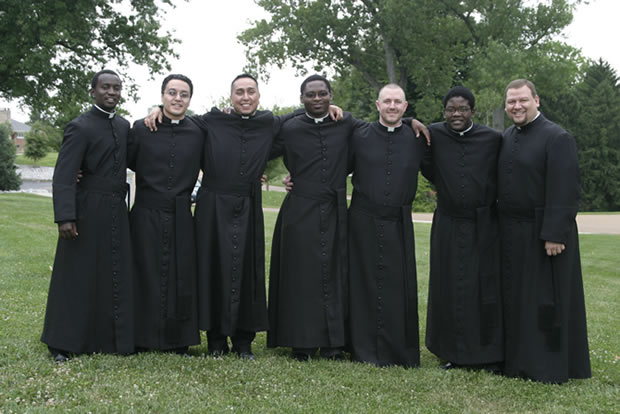 (Brother Watkins is currently a 25 year-old, 1st Year theology student from the United States Province of the Missionary Oblates of Mary Immaculate studying at Oblate School of Theology in San Antonio, Texas.)

“Every story is told for a purpose, and I would be remiss to proceed to tell you my story without at least letting you know on what I intend to focus my attention.  As we all know, of primary importance in conversion is acceptance of God’s unconditional love and mercy; St. Eugene’s Good Friday experience bears witness to this.  Now, let me proceed to share how God’s radical gift of healing has given me ‘a new heart, a new spirit, a new mission’.

Much of my conversion story centers on an event that occurred when I was 14 years old.  On February 5, 1999, my mother (SueAnn), her parents, and two of my little sisters (Julie and Kristin) died tragically as the small airplane in which they were flying crashed.  This left my father (Richard), my sister (Allison), and I to carry on and grieve our loss.  Prior to that event we had been a happy, Catholic family living on a cotton farm in West Texas.  Normal, busy days with plenty of love mixed in characterized our lives together.  However, after that day it seemed that any semblance of a normal life was shattered forever.  Shock reined the next couple of days, and as we knelt praying the rosary with the community at the wake service, I stared at the five caskets in front of me and almost wished that I was in one of them.  Suddenly, through the darkness and pain that clouded my mind, I felt a ray of God’s peace burst through the mist.  I vaguely perceived that Jesus had given me his own Mother, Mary, to be with me as my new Mother, and I knew that someday this gaping hole in my heart would be filled.  That was my first real connection with Mary.

As the events of that week passed and life began to resume its normal pace, I forgot that sense of peace and hope.  In high school I gradually began to fill that hole in my heart with partying, drinking, and dating.  College was similar but even wilder; I had nothing and no one to limit my excesses and I drifted from one hazy night to the next.  Sundays were the worst.  I would go to Mass on most Sundays, but afterwards I would feel the depression, loneliness, and emptiness that inevitably crept up when no one was around to distract me from who I was becoming.  Occasionally when I was feeling very low I would reach for the rosary that hung mostly unused on my doorknob and say a couple decades.  Solace and comfort would envelop me for a moment but I would then go on my way like a man who looks in a mirror and promptly forget what he looks like.  My first three years at Texas A&M University were thus, but God started a process that would start to open my eyes to His mercy waiting to fill me.

During the spring of my junior year, I attended a weekend retreat in the style of Cursillo called Aggie Awakening.  A month after this I was invited to a conference given by a prominent Catholic preacher.  Then, that next summer while at home, my sister Allison gave me a book called True Devotion to Mary by St. Louis de Montfort.  As I read I felt inspired to go through the process of consecration to Jesus through Mary by renewing my baptismal promises and dedicating the whole of my life to God.  However, I wrongly assessed that I was unworthy and that I should work to be a better person before attempting something of this magnitude.  This lack of acceptance of my finitude led me to even worse extremes, and I slid deeper into darkness.  Now, when I had finished reading the book the first time I promised myself that I would read it again that fall.  Luckily I kept my promise and after reading the book again I saw that perfection through surrender was what was required and not perfection through lack of blemish.  Thereafter, I began the 33 days of preparation for my personal consecration by reciting the rosary and daily uniting myself to Jesus through Mary.  During that time, I found that my deeply ingrained inclination toward grievous sin was diminished considerably.  The opportunities were still present, but my attraction to them was not.  In the beginning of the process I felt light and happy, but as the days advanced things got harder and I began to understand the weight and gravity of what I was freely choosing:  the Cross of Christ.  During this process a question kept sticking in my mind:  Was God calling me to be a priest?  This thought manifested itself one day at daily Mass during the words of consecration.  ‘Do this in memory of me’ echoed in the depths of my being, and it was as if Jesus was asking to say these words through me.  Yet, I was still hesitant; was I just making this up?

Then on day of my consecration, December 8, 2006, I went to Confession and Mass and recited my prayer of consecration.  From that moment I perceived that a burden had been lifted from my shoulders.  I went to a chapel for Adoration of the Blessed Sacrament and spent nearly three hours praying with great fervor.  As I knelt and prayed my rosary, just as I had so many years before, I knew with every fiber of my being that Mom, Julie, and Kristin were right beside me praying with me.  At that moment I felt the same ray of peaceful, penetrating light from God that I had experienced the night of the wake service.  Joy infiltrated my senses, and I knew that I would never again walk alone.  The pain and misery that for years I had known was gone and the hole in my heart had been filled with unconditional love and mercy.  Besides this, I also knew with certainty that I was truly called to be a priest; how else could I respond to such generosity shown me by God?

Then the truly hard part began:  to which community or diocese was God calling me?  This decision did not come so easily or dramatically.  As I left for home at the Christmas break, my father told me that our bishop, Michael Pfiefer, OMI, was in a community with Mary in the title.  Considering my newfound devotion to Mary, this sounded like a good place to start so I met with him, and he put me in contact with the vocation director, Fr. Charlie Banks, OMI.  Fr. Charlie’s persistence in keeping contact was pivotal, and he introduced me through a pamphlet to St. Eugene de Mazenod.  This man’s fiery temper reminded me of my own and his time in exile took me back to the years I had spent as an outcast from true happiness.  But it was his love for the poor and most abandoned that eventually opened my heart to the Missionary Oblates of Mary Immaculate.

Eventually I decided to enter, and with time I have found that the peace that I once felt only occasionally has now taken up a permanent residence in the depths of my being.  Now I understand that Jesus allowed me to feel all those years the crushing weight of darkness in order to be able to sympathize with those who have lost their last strand of hope.  “If we bear in our body the death of Jesus, it is with the hope that the life of Jesus, too, may be seen in our body.” “(OMI CC&RR 4)