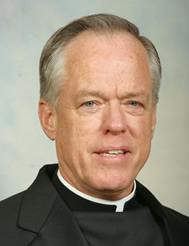 Father Michael O’Hara, O.M.I. is involved in one of the most
challenging of all Christian ministries.  He serves as the chaplain at the
Metropolitan Correctional Center (MCC) in New York City, a federal prison
that houses some of the most notorious criminals in the world. 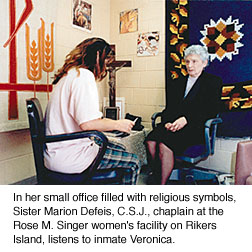 The bosses of various crime families in and around New York City have been and are incarcerated there.  Investment fraud perpetrator Bernie Madoff was an inmate for a time at MCC, sharing a cell that was smaller than the walk-in closet of his Manhattan penthouse.

But despite the heinous crimes committed by some of the inmates, Fr. O’Hara’s work at the prison is much more positive than negative.  He describes his task as pre-evangelization, showing people that their lives have value even though they have been convicted of serious crimes.

Father O’Hara sums up his ministry in one word – hope.

As a youth Fr. O’Hara became familiar with the work of the Oblates.  He was drawn to the congregation because of their work with the most marginalized people in society.  He was ordained to the priesthood in 1973 and for a few years taught at a high school and served in parish ministry in Miami, Florida.

For the past 26 years Fr. O’Hara has worked at federal and state prisons in Pennsylvania and New York.  He has been at MCC since 1998 and is presently the only full-time chaplain at the facility, which houses nearly 1,000 inmates.

The population at MCC consists of prisoners from 48 different countries.  Drug lords from Colombia and international terrorists, including those involved in the World Trade Center bombing in 1993, are among Fr. O’Hara’s “congregation.”

While high-profile criminals at MCC attract a lot of media attention, most of the inmates are serving shorter sentences for less serious crimes.  Father O’Hara said his prison ministry at MCC can help these inmates realize they can change their ways and become productive members of society.

Father O’Hara celebrates Mass, organizes rosary groups and conducts several Bible study sessions throughout the week.  About half of the inmates identify themselves as Catholics, but Fr. O’Hara said very few understand fully what that means.

Father O’Hara is also the prison’s supervising chaplain, which means he oversees the religious needs of all inmates.  No fewer than eight religions are practiced, including Islam, Buddhism and Judaism.
As supervising chaplain Fr. O’Hara coordinates the activities of ministers of other faiths and arranges translators for several different languages.  He also provides counseling and religious activities for the prison staff.

One additional challenge at MCC is that over 500 of the inmates have to be isolated from other inmates due to security concerns.  As a result Masses and other religious services are held in individual units instead of at a central location.

Since the early days of the congregation the Missionary Oblates have been involved in prison ministry.  The founder, St. Eugene De Mazenod, was part of a charitable organization that aimed to help prisoners in his native city of Aix, France even before he entered the priesthood.

As a young priest one of St. Eugene’s first apostolic activities was to minister at the Aix prison.  He was struck down with typhoid while working there and credits the prayers of the inmates as a reason for his recovery.

Father O’Hara tries to help the inmates focus on the present and future more than the past.  While justice has to be administered, he believes that people can change their lives for the better.

One of the Bible passages that Fr. O’Hara likes to share is the account of the crucifixion in the Gospel of Luke.  In the story Jesus is crucified with two criminals.  One criminal reviles Jesus by saying, “Are You not the Messiah?  Save Yourself and us.”

But the other criminal points out that Jesus has done nothing wrong and asks Him to, “Remember me when You come into Your kingdom.”

Jesus replies to that criminal, “Amen, I say to you, today you will be with Me in paradise.”

Father O’Hara reminds the inmates at MCC that the first person to whom Jesus promised eternal life was a criminal, just like them.  Jesus’ act of forgiveness on the cross motivates Fr. O’Hara in his work at MCC.

“Prison ministry is truly a Christian ministry,” says Fr. O’Hara.  “It is both fascinating and rewarding for me.”