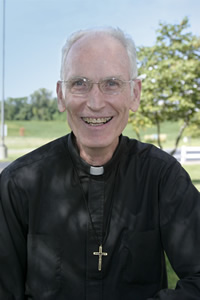 Father William Maher, O.M.I. was born and raised in Chicago, Illinois.  But he has spent the majority of his life – nearly 48 years – in Japan.  He is one of 21 Oblates who live and work in the country, including his brother, Fr. Thomas Maher, O.M.I. who has been in Japan for 54 years. Father Bill began his mission in Japan in 1962 as an Oblate Scholastic.  He found his 6’3” frame to be somewhat out of place in the Japanese world built for much smaller people.  He also struggled to learn Japanese.  But looking back, he has never been sorry he went to Japan.  He has found that the Holy Spirit was always there when needed. After ordination Fr. Bill was sent to the Island of Kyuushu for one year as an associate pastor. It was a very active parish and a good place to start his priestly ministry. It was located next to a large American Air Force base where the Oblates assisted with pastoral needs.

One of Fr. Bill’s most memorable assignments came shortly thereafter when he was tasked to live in the rural area of Nakamura and build up the Oblate presence there.  When he arrived, he found just 26 Catholics.  These parishioners rented an old Japanese house for him – a tiny place that had only one chair and straw mats called ‘tatami.’  The home was expected to be the place where he lived as well as the church in which he would celebrate Mass. Father Bill was excited about spreading the Word of God in this area.  While he thought he was one of the only Christians in the area, he found on his first Sunday that he was mistaken – there were two nearby Protestant churches.  But because Japan has so few Christians, there was still plenty of work for everyone.  Every year the Catholic and Protestant churches joined together to put on a Christmas program for the city.  This practice continued for 15 of the 17 years Fr. Bill was in Nakamura. Father Bill put a sign in front of his small house that read ‘Catholic Church’ – his attempt to penetrate the society in which he was living.  He found himself celebrating Sunday Mass as well as teaching Bible and catechism courses.  And as one of the few foreigners in the area, he was asked to teach English as well. He found teaching was not only a good way to meet people and provide for one of the needs in the area – but it allowed him to support himself as well.  By the end of his seventh year in Nakamura the Oblates were able to buy land to build a church.  After three more years of work a combined chapel and house were completed. This was his parish for the remaining ten years that he lived in Nakamura.  Now his brother, Fr. Tom, is the pastor of that growing parish.

After Nakamura Fr. Bill spent 8 ½ years at a more established parish, St. Paul Miki in Tokushima City, where the Oblates have worked for over 50 years.  It is an active parish where the people have very strong faith.  Parishioners hold an annual prayer service for peace in honor of those who died when the city was destroyed during World War II. The Island of Kyushu was Fr. Bill’s next home.  Here he worked with another Oblate, Fr. Leonard Inui, O.M.I. who specializes in Montessori education.  The Oblates have opened six of these specialized schools for youngsters throughout Japan.  The parish in Kyushu, Our Lady of Peace, was established by the Oblates.  It was also a very active parish and Fr. Bill found his six years there to be very fulfilling.

Since 2003 Fr. Maher has been stationed at St. Paul Miki in Tokushima for a second time. He had the great honor of celebrating with parishioners during the church’s 100th anniversary in 2006. He finds his work to be extremely satisfying and enjoys working with the youth and the Sunday school program.

While the past 50 years have brought many changes and countless challenges, Fr. Bill Maher continues to look forward to what the future might hold.  For now, though, he enjoys his role at St. Paul Miki.  With the help of the Spirit he hopes to continue to enrich the spiritual lives of his parishioners in new and exciting ways.