The devastating earthquake that hit Haiti on January 12 has caused much suffering for the Oblates who serve in the impoverished nation.  More than 120 Oblates work in Haiti, and it is unclear at this time the number of deaths or injuries that have taken place among the Oblate community.

Below is the latest information known about how the earthquake has impacted the Oblates in Haiti:

We have learned the sad news that one of the victims of the devastating earthquake in Haiti is a 28 year old scholastic, Brother Weedy ALEXIS. He was found dead under the rubble of the Center of Studies for Religious after the January 12 earthquake.

General Councillor, Fr. Loudeger MAZILE, says that other Oblates and scholastics in the ruined city have survived.

Fr. Fred CHARPENTIER, who works in Les Cayes, about 100 miles from the epicenter, reports that damage in the Les Cayes region was much less than in Port au Prince.

The Les Cayes region includes the Proje Espwa (Project Hope) orphanage run by Fr. Marc BOISVERT. On Fr. Marc’s blog, we read the story of one of the women who works at the orphanage: “Joey Lamarre’s mother is one of our housemothers. She spoke to Joey who was in class when the earthquake struck yesterday. His professor and two of Joey’s classmates were killed as the walls of the university crashed down. Joey was hurt and was buried for six hours but he was finally freed and brought to a temporary clinic. He may have serious injuries and his mom is going to Port-au-Prince to be with him.” (http://pwojeespwa.blogspot.com/)

Bro. Clausel GERMEIL, who lives at the provincial house in Port au Prince, e-mailed that he was teaching in a school at the time of the earthquake. The school totally collapsed on him and the students. He was not severely injured. Damage at the provincial house was in a section mostly of offices and not where the Oblates live. The theology house next door was completely destroyed.

While it is impossible to receive complete news of the Oblates living near the center of the January 12, 2010, earthquake in Port-au-Prince, Haiti, the General Councilor for Latin America, Fr. Loudeger Mazile, O.M.I., now meeting with the Central Government in Rome, was able to get some early reports. 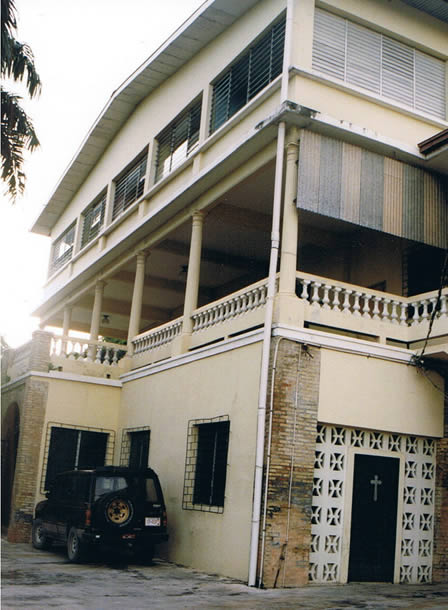 The scholasticate (theologate) has been destroyed. We have no information about the safety of the community there.

The study center for religious where the provincial, Fr. Gasner Joint, O.M.I. teaches, was destroyed with the students inside the building. There is no report of the number of casualties there.

As further news becomes available, we will try to continue to inform the Congregation. Please pray for the people of Haiti and our Oblate community there.

Father Marc runs an orphanage for more than 600 children in the city of Les Cayes.  He has a website, www.freethekids.org, in which he is keeping a blog about the effects of the earthquake.  Here are his latest comments.

January 13, 2:24 p.m.  Joey Mlamarre’s mother is one of our housemothers.  She spoke to Joey who was in class when the earthquake struck yesterday.  His professor and two of Joey’s classmates were killed as the walls of the university crashed down.  Joey was hurt and was buried for six hours but he was finally freed and brought to a temporary clinic.  He may have serious injuries and his mom is going to Port-au-Prince to be with him.

January 13, 8:22 a.m.  The children and housemothers slept outside last night as the tremors continued. Not much sleeping took place and the kids are dragging this morning. I went by there around 5:00 this morning to check on them.

January 12, 8:42 p.m. Wow. Just finished with two more tremors that felt much like the first one right after the earthquake. Don’t think the folks down here will sleep well tonight.

January 12, 8:11 p.m. The news from Port-au-Prince is very bad. Few could get through as the cell phones are either not working or the lines are jammed with everyone attempting to call. Heard from Andy Topp who is down here with a group helping out another orphanage in the area and they are all well. The focus right now is to help our sisters and brothers in the capital. Getting in and out of Port-au-Prince may not be possible as I’ve heard that the road has become impassable. As all of us down south depend on food shipments (and all other commodities) from Port-au-Prince, this could become a major crisis for us. Please do what you can for the Haitians and keep us all in your prayers.

January 12, 6:04 p.m.  Yes, we had an earthquake and it was amazing. Lots of shaking and questioning, enthralled kids but, thankfully, no one hurt and no structures damaged. I was surprised at the magnitude… much greater than the few I had experienced in CA. Now there’s a tsunami watch so say a prayer! Thanks.