Bishop Paul Duffy, O.M.I. accepts the difficulties that come with taking the road less traveled.  Today, it is a road that is at the center of his latest difficulties.

That road is the only road connecting the cities of Mongu and Kalabo in the western portion of .  For Bishop Duffy, it is a symbol of how the government, and in particular President Rupiah Banda, have not followed through on promises to improve the lives of the poor in his diocese.

For the past several years President Banda has been promising to fix the road, but there has been no action and the road continues to worsen.  It has become nearly impassible in several locations, but it is a vital link for transportation, people, food, medicine, teachers, supplies, doctors, nurses, the Oblate missionaries. 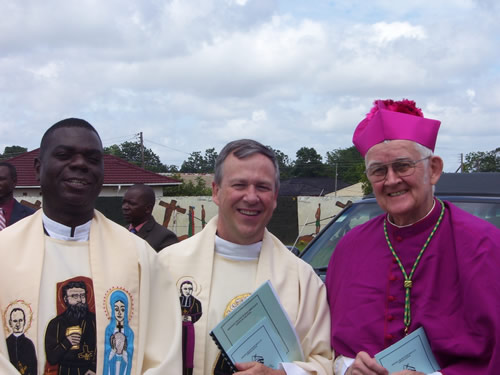 Bishop Duffy has gone public recently with his disappointment in the Banda government.  http://www.postzambia.com/post-print_article.php?articleId=4384

“He (President Banda) needs to show some real achievements,” said Bishop Duffy.  “We have not seen too much that he has accomplished.”

President Banda and his supporters have condemned the comments from Bishop Duffy.  Supporters of the government have even written to officials complaining that the bishop’s statements are dividing the country and inciting tribal and regional hate.

Bishop Duffy however has many supporters who praise him for having the courage to stand up to the government when those in charge are neglecting the needs of the poor.

Fr. Godfrey Mpundu, O.M.I., the treasurer for the Oblates in stated. “Paul Duffy still remains the voice of the voiceless, whether you like it or you do not like it.”

Bishop Duffy and three other Oblates arrived in from in 1984. In addition to establishing parishes and seeking new ways to preach the Gospel, the Oblates created an abundance of social ministries such as a nutrition center, AIDS outreach programs and supported the establishment of an AIDS hospice, all of which are still in operation today.

In 1997 the Diocese of Mongu was created in the western portion of and Pope John Paul II chose Fr. Duffy to be its first bishop.  Over the years, Bishop Duffy has not been afraid to speak out for the poor, especially challenging politicians on issues of development and human rights.

“Once candidates are voted into power they need to speak on behalf of the electorate and contribute towards the enactment of just laws that will facilitate development in their respective constituencies,” said Bishop Duffy prior to a previous election.  “To disappear after you have been put in power shows irresponsibility and selfishness.  Such people should not be given a mandate to represent people because it clearly shows that they only want to protect their selfish motives.”

Being subjected to harassment by the government is nothing new for Bishop Duffy.  Beginning in 2005 he was repeatedly harassed by immigration officials.  Archbishop Telesphore Mpundu of came to Bishop Duffy’s defense.

“Bishop Duffy has spoken out on several occasions on behalf of Zambians, particularly the poor of Mongu Diocese and the , the poorest in the country,” said Archbishop Mpundu.  “Though an American Missionary Oblate, Bishop Duffy has chosen to live and work among the poor of the Western province and, God willing, to die there.  It is shameful that our government should treat this gallant missionary in such a cowardly and unseemly manner, so obviously intended to silence and intimidate him and the leadership of the Catholic Church in .”

Friends of Bishop Duffy have expressed concern in recent months about the safety of the leader of the Mongu Diocese.  In January, another Catholic official who called the government to accountability, Fr. Augustine Mwewa, treasurer of the Ndola Diocese, was assaulted after questioning President Banda’s propensity for travel.

“It’s too bad that people threaten other people,” Bishop Duffy told The Post Newspaper after the attack.  “It is a sign that they are weak themselves and they therefore resort to something that they know is wrong.  I think that each citizen has a right to their opinion regardless whether others like their opinion or not.  We are all free individuals and we are all capable of using our intellect.”