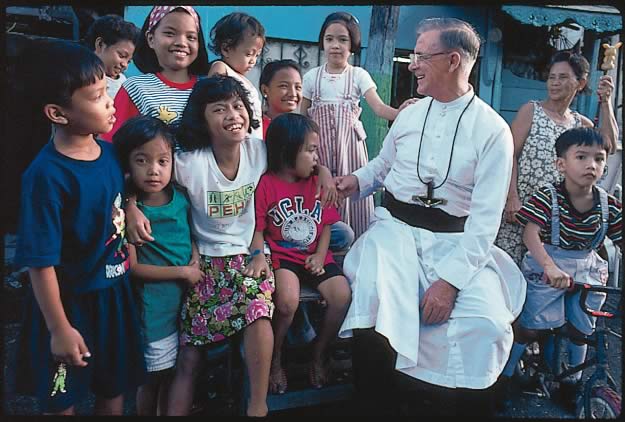 More than seventy years ago, the late mission ary Bishop Luis del Rosario, SJ heard of the Missionary Oblates of Mary Immacu late that has been known in the Church as ‘specialists in the most difficult missions’. The bishop was thinking of his frontier territories down south also known as the Moro Provinces – the em pire province of Cotabato and the entire archipelago of Sulu. This discovery prompted him to visit the OMI General House in Rome during his ad limina visit to the Holy Father. He spoke of the most difficult missions and the dangers of Cotabato and Sulu that melted the heart of the OMI Vicar General.

In 1939, the Mission ary Oblates of Mary Im maculate, or OMI for short, accepted the challenge to mission in Sulu and Cotaba to (as big as the entire cen tral Luzon). The first batch of the OMI Missionaries ar rived in Manila on the 25th September of the same year after more than 40 days of boat travel from New York. The second batch arrived a month after. The 7 OMI pioneers coming from USA were only given a week to pack their bags and sail for the Philippines. None of them knew where the Phil ippines was, thus after their talk with their superior, they scampered to the library to search for information about the Philippines.

The seven pioneers became legends in Cotabato and Sulu. They were Frs. Gerard Mongeau (Superior of the new Philippine Mis sion), Francis McSorley, George Dion, Emile Bolduc, Egide Beaudoin, Joseph Boyd and Cuthbert Bill man. In OMI history, these pioneers were also known as the ‘Magnificent 7’ of the OMI Mission in the Philip pines.

Fr. Francis McSorley became a friend of General Paulino Santos and togeth er planned the settlement of South Cotabato. Where General Santos established his new municipalities, Fr. McSorley established the parishes and the schools. And later when Fr. McSor ley became the first bishop of Sulu and Tawi-Tawi, he began his deep friendship with Moro leaders and de veloped the Notre Dame College of Jolo as first rate tertiary education for the Muslims.

Fr. George Dion, who also became bishop of Sulu, was associated with the first Catholic commer cial broadcast media in the Philippines. His name was so much linked to DXMS (Cotabato), DXND (Kida pawan), DXMM (Jolo) and DXGD (Bongao). He also became director of Radio Veritas.

Fr. Cuthbert Bill man was the writer in the group. He immediately got involved in the National Catholic Paper, the Senti nel. He was responsible for the training of young journalists, the likes of Max Soliven, Emil Jurado, Eggie Apostol and Nelly Sindayen who in time became icons of Philippine journalism. These journalists were so well trained that they, too, got Fr. Cuthy’s mannerism and colorful expletives. Fr. Billman was the founder of the first local newspaper in Mindanao, the Mindanao Cross that began printing in 1948, and the Sulu Star.

Fr. Joseph Boyd was the great liaison and pro cure man for the mission. He stayed in the Diocese of Manila and became a close friend to Archbishop Mi chael O’Doherty and his young Secretary, Mons. Rufino Santos who later be came the first Filipino Car dinal. Fr. Boyd was able to secure the pastoral respon sibility from the Diocese of the former ‘friar’ land called Grace Park (a name taken from the Archbishop’s title, ‘His Grace’) north of Ma nila.

Fr. Emile Bolduc be came the first Oblate Pastor in Sulu. He became famous not for his construction and projects but for his prayer life and spirituality. He also became pastor in Grace Park and from there moved to the OMI Novitiate to be come the towering symbol of religious and missionary life to young Filipino Ob lates in formation. At his fu neral, Archbishop Mongeau gave credit to Fr. Bolduc for the success and the achieve ments of the OMI missions in Cotabato and Sulu. To the pioneers, Fr. Bolduc was the soul of the mission through his prayers and hours before the Blessed Sacrament.

There was not much said about the 7th pioneer, Fr. Egide Beaudoin. He be came the first Oblate Pastor in the whole territory now known as North Cotabato based in Midsayap. All the pioneers were interned at the UST Concentration Camp throughout World War II until the liberation of Manila in 1946. The harsh conditions of the concentra tion camp wrought havoc to his health that he had to go back to the US for recupera tion.

They were actually three waves of OMI pio neers to mission in Cotabato and Sulu. The first wave arrived in September and October 1939. The second wave of seven came a year after in September 1940 (Frs. George Baynes, Edward Gordon, Emile Laquerre, Jo seph Quinn, John Sheehan, Paul Drone and Bro. Michael Braun). The third and last wave of pioneers consisted of four OMIs from the US Irish Province, and arrived in September 1941, few months before the bombing of Pearl Harbor (Frs. James Burke, Edward McMahon, Robert Sul livan & Bernard Clancy).

Not much cred it and fo cus were given to the second and third waves and their names are hardly remem bered yet they, too, were giants in the mis sions in Sulu and Cotabato. In fact, the first blood shed for the mission belonged to these last two waves. Frs. Paul Drone, Edward McMa hon and Bro. Michael Braun were beheaded by the Japa nese during the war.

Seventy years ago, the Oblates of Mary Im maculate dared to accept the Church mission in Co tabato and Sulu. Through the years, the OMI’s have never been lacking in cour age and generosity in build ing these frontier territories. They have become all sorts to all people–builders, car penters, farmers, educators, pastors and peacemakers.

The OMI Mission in 1939 has now become a ro bust Province that sends missionaries to Japan, Thai land, Korea, and China in Asia; Bolivia and Argen tina in Latin America; and Canada and US in North America.

The OMIs have had their share of martyrs in their 70 years in the Philip pines. The first martyr was election-related. Fr. Nelson Javellana and his volunteers of the first Philippine move ment for clean and honest elections were ambushed near Tambunan, Cotabato on November 3, 1970. Three martyrs shed their blood in Sulu and Tawi-Tawi. They are Bishop Benjamin de Je sus on February 4th, 1997, Fr. Benjamin Inocencio on December 28th, 2000 and Fr. Jesus Reynaldo Roda on January 15th, 2008.

Though painful and sorrowful, the OMIs take pride in their martyrs who paid the ultimate price for the values and beliefs close to their hearts. They were not brave men, but because of the love for their people and the trust in God, they were able to muster enough courage to silence the fears in their hearts.

Today, as the OMIs celebrate the 70th anniver sary of their presence in the Philippines, specifically in the remote islands of Sulu and Tawi-Tawi Archipelago, they recognize their mission partners and friends as they look back with thanksgiving for what God has wrought through their various min istries. They pray that God will continue to journey with them as they dare to move forward.