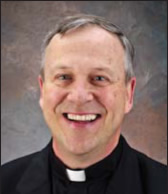 Dear Brother Oblates, Oblate Associates, Honorary Oblates and Friends,
Blessings! Today is the feast of Saint Eugene de Mazenod, the founder of the Missionary Oblates of Mary Immaculate. On this day in 1861 he died in Marseilles, France. His biography by Leflon has the following passage on pages 304-5:

“On May 21, after giving his Oblate sons a last blessing and a final exhortation to be charitable to each other and zealous for souls in their work, the old bishop died at the very moment those at his bedside were reciting the last words of the Salve Regina: O clemens! O pia! O dulcis Virgo Maria! Although, on the preceding days, he had been in a coma much of the time, the dying prelate regained consciousness when his last hour arrived as he had hoped and prayed. In his lucid moments he had frequently murmured: ‘How I would like to see myself die so that I might freely accept the will of God!’ On several occasions he had insisted with those keeping watch at his bedside: ‘If I drop off to sleep and become worse, awaken me, I beg you. I want to die knowing that I am dying.’ The old warrior wanted to make the supreme sacrifice, conscious to the end. And God refused him neither the merit nor the happiness of doing so.”

This is the 149th anniversary of Eugene’s death and I would invite us to begin, in a simple and humble way, a “DeMazenodian Year” in preparation for 2011 and his 150th anniversary of ‘birth into heaven.’ Let us study again the life and spirit of the Founder, be renewed by his legacy to us, and turn to him in prayer. The “old warrior” will intercede for us and stir up within and among us a deeper fraternal charity with which to live a more committed apostolic community life and a greater zeal for our mission to preach the Gospel to the poor in our reality today.

Our Superior General gave St. Eugene de Mazenod as the patron of the United States Province of the Missionary Oblates of Mary Immaculate. Let’s get to know St. Eugene better, develop a deeper relationship with him, love him and often turn to him in prayer as we face the challenges before us. This week I am at the Youth Ministry Forum in San Antonio and it is impressive to see the vibrant love and spirited devotion for St. Eugene among the young Oblates present (especially the scholastics) and the lay leaders. The Oblates and youth ministers here have committed themselves to make better known and utilize among the youth two Oblate expressions: “He has sent me to preach the Gospel to the poor. The poor are having the Gospel preached to them” and “Praised be Jesus Christ and Mary Immaculate!” Let’s all do likewise in our communities and ministries.

Saint Eugene’s ‘methodology’ of teaching the people first to be human, then to be Christians and then to become saints calls all of us to grow in holiness. “In the name of God, be saints!” he commanded and left us the legacy to live charity among ourselves and zeal in the mission. His life and mission continually challenge us to grow, to be converted and to be transformed.
May this “DeMazenodian Year” be a source of grace for us all!