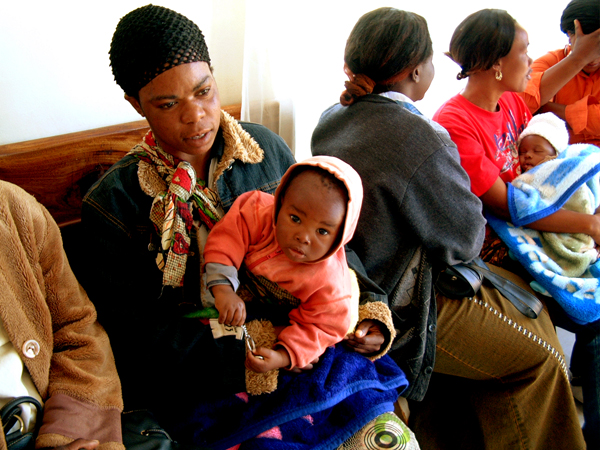 A mother and baby wait to see a doctor at Our Lady’s Hospice.

Our Lady’s Hospice chapel was blessed by Archbishop of Lusaka, Telesphore Mpundu on May 17, 2010. Joining in the celebration were representatives from the four religious congregations who run the hospice together: Fr. Patrick Gitzen, OMI, Ernest Wildi,SMB, hospice chaplain, Fr. Gabriel Walter, SMB, assistant chaplain, and Fr. Eugene O’Reilly SPS. Others present were the friends of the hospice, well wishers, patients with their families, and the hospice staff.

The blessing of the chapel was marked by the celebration of Mass. In his homily, Archbishop Mpundu emphasized the significance of having a place of worship at the hospice. He stated that God dwells in places least expected of Him. He likened the chapel at the hospice with God’s invitation to Moses to take off his shoes in a seemingly God forsaken land. Many people see a hospice as a place where we find a lot of pain and suffering. The Archbishop pointed out that in the midst of such suffering, God dwells. He further called upon everyone who enters the hospice grounds to take off their shoes as they will be standing on holy ground.

The hospice administrator, Sr. Kay O’Neill, FMDM, thanked the Archbishop and all present. She also thanked the contractor and designer of the chapel and all those who have made it possible for the chapel to be constructed.