Observations from the 35th Oblate Chapter in Rome

The accompanying reflections and photos are from Geri Furmanek, Director of Mission Enrichment and Oblate Associates. This will be updated frequently during her participation at the meeting. 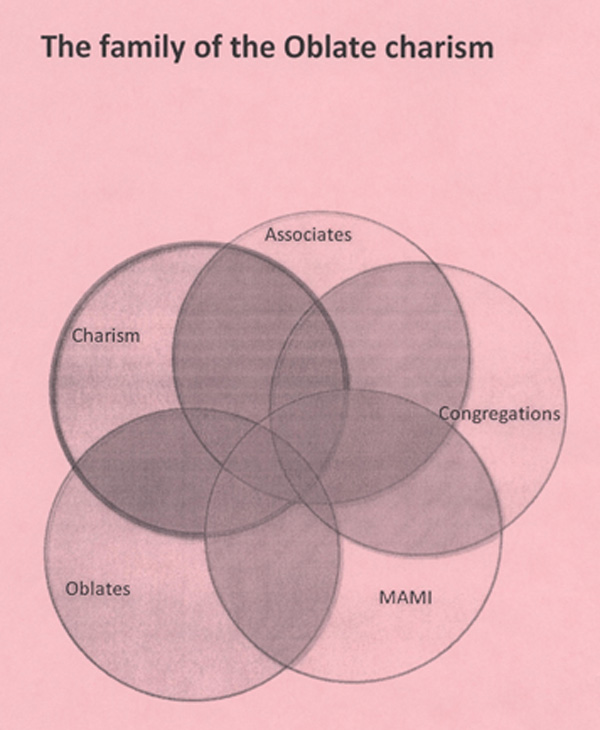 The 2004 General Chapter called for the creation of an International Commission of Oblates and Associates to explore structures that would promote association and called each Oblate Unit to review its own commitment to forms of association. The Venn diagram (shown on the left) helps to illustrate how all the parts of the Oblate Family are connected.

The November 2008 edition of the Oblate Associate newsletter showed the 15 members (11 Associates and 4 Oblates) that were part of that Commission. At our final meeting (the Commission completed their task for this Chapter) the members voted to send a representative from each region. On September 11, 2010 we presented our report, proposals and answered questions from the Chapter members. We are hoping that the final Chapter document will have a section that speaks to Associates.

Associates completed their attendance at the Chapter on September 15th. I tried to take enough pictures before then to have a few updates these last 3 weeks. So, bear with me if some of the pictures seem ‘mundane.’

The dining room is set up with round tables seating 8 persons. To the question of “What was the food like?” I offer pictures worth a thousand, maybe just a hundred words…. 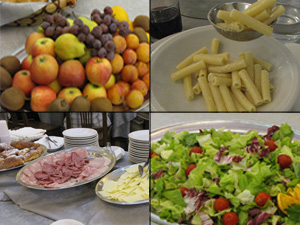 Some of the discussions by capitulants (those voting members of the Chapter) meet for discussion in language groups throughout the vast De Lasalle campus. 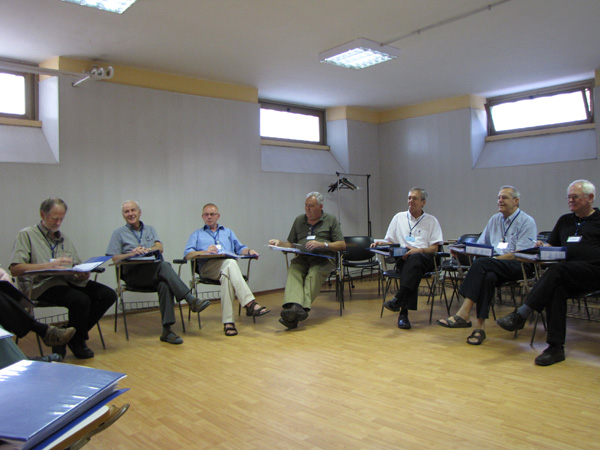 I’m also including a picture of the voting machine (under the lid of each person’s desk); and how the voting tally lights up on the wall above the large screen. There are 88 voting members. 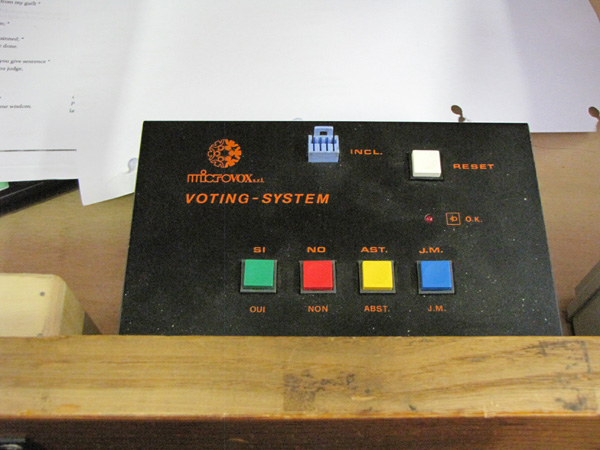 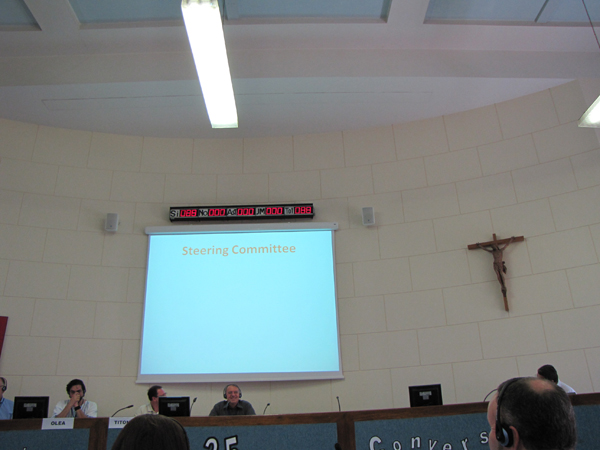 The facilitator, Brother Paul Michalenko, ST often kept capitulants focused on where they were in the overall process using the “U Theory of System Change.” 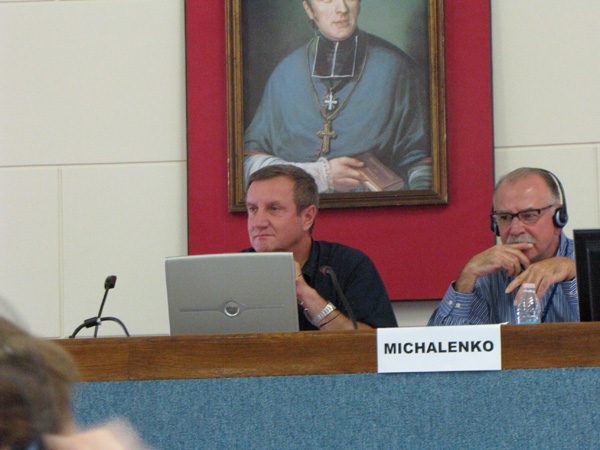 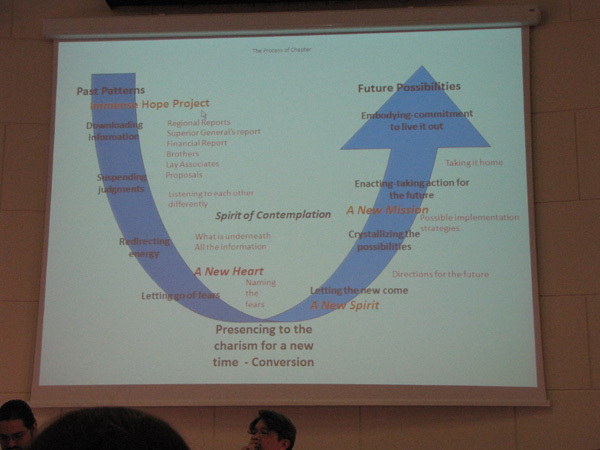 “U” Theory of System Change

The title picture of the Canada-US presentation by way of DVD (created by Oblate Media) had several participants getting up to snap a photo. 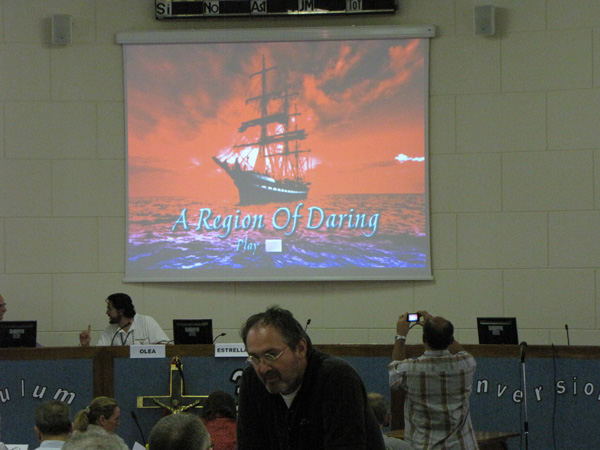 A big thank you to the translators—all of this could not have happened without their help. Fr. Tony Ortiz and Fr. Ron Laframboise handled the Spanish or French to English. Written translations were coordinated by Fr. Jim Allen and Fr. Tom Coughlin. 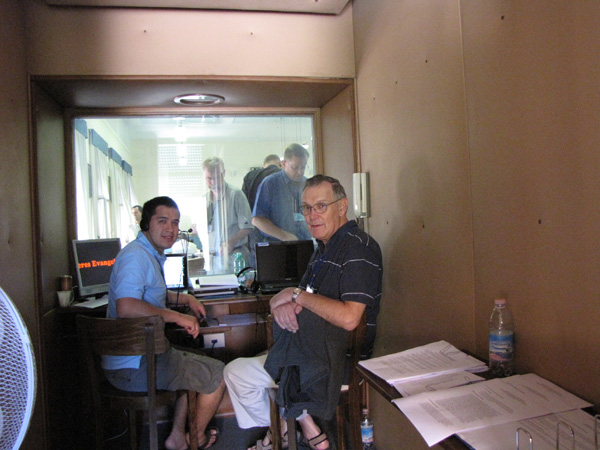 Oraison, Morning and Evening Prayers as well as daily Eucharist have been prayed by the capitulants. 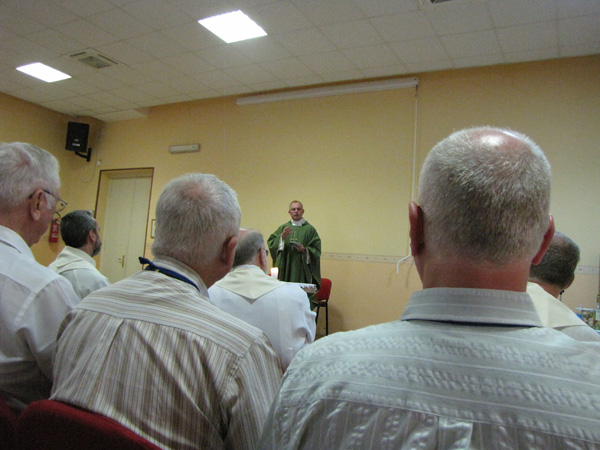 On the day of the report by the Associates, there was a report by the Brothers. Bro. Benoit gave the report with the other brothers at Chapter (5 or 6 in all), including Brother Charlie Gilbert (Lowell, MA) responding to questions. 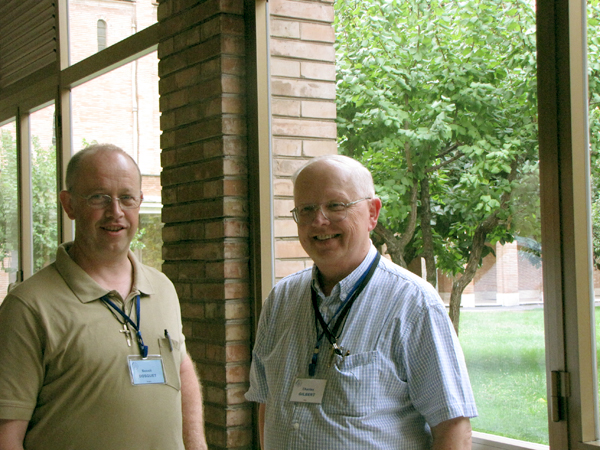 On Monday, September 28th, Fr. Ron Rolheiser will give a retreat to the members. 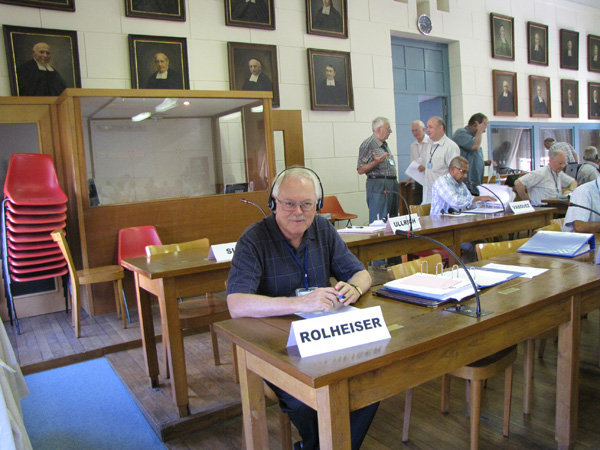 Thanks to Fr. Jim Allen and Fr. Nino Bucca news of the Chapter in word and picture has been available on the OMI world website. 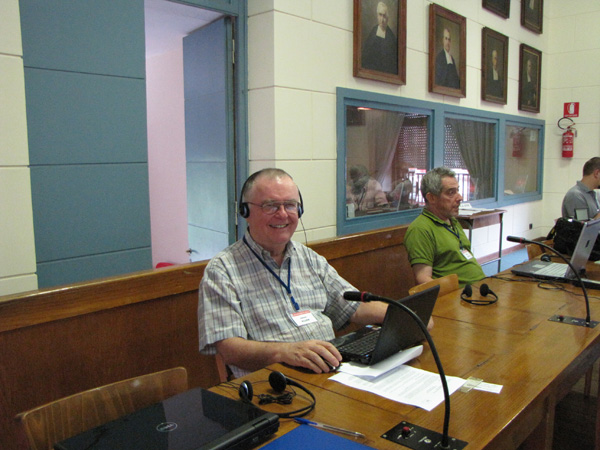 That’s all for now, hopefully toward the end of the Chapter I’ll have a few more pictures and reflections to send. In the meantime, let us unite to pray for the Chapter and those involved in making future decisions for the Congregation. –Geri

The process used at the Chapter has been to have some information presented, followed by a few moments of silence and then to share with another person or in small groups of 4-6 [not unlike our sharing at Oblate Associate meetings].

One of the first sharings in the regional groups of the Chapter was to get acquainted in the region groups by interviewing another member and presenting that person to the 5 Associates here who were invited to go to their regional meeting. In the Canada-USA region Fr. Louis Robert Lougen and I introduced each other.

Among some of his interesting history is that he was born in Buffalo, NY, he was named after his mother’s (Louise) father (Louis). He ministered to the people of Brazil for 18 years, did formation work (pre-novitiate, novitiate), ministered in the base communities in Brazil (his reason for going to Brazil was to served the poor) and has served as Provincial since February 2005. He knew Oblates from grade school. His hope for the Chapter is to remember that God can do more than we can ask or imagine.

The other person I interviewed in the group was Fr. John Malazdrewich, recently elected Provincial of the Canadian Province of OMI-Lacombe. He grew up on the prairies of Saskatchewan and came to know Oblates through the Knights of Columbus Magazine. He entered as a Brother and after 6-7 years decided to enter the scholasticate, and was ordained in 1991. This is his first experience at a Chapter and his hope is to live and experience it, especially with this theme of conversion.

After our group sharing I asked those from the Canada-United States region to step outside for a group picture. As you can see they are a very welcoming group.

On September 11th the 35th Chapter will hear a report from the International Commission for Oblate Associates. This report, the work of the Commission over the past several years has been prepared in French, English, and Spanish, and encompasses the experience of Associates throughout the world.

Fr. David Kalert drove me to the Generalate for a picnic on the lawn.  It was a thank you for Fr. General Wilhelm Steckling and those in the outgoing Administration.  Fr. Rufus Whitley made pancakes to go along with the eggs, toast, salad, sausage and sangria.

The Chapter is taking place at the Generalate of the Christian Brothers of  De La Salle.  The building is huge.  The attached picture is a 1/80th scale model of the buildings.  Most of the house has been turned into a 120 room hotel that has several dining rooms. The building on the right in the picture has the Chapter Hall on the second floor and dining rooms on the first floor.

At the opening Eucharist the five lay people from the Commission sat in the sanctuary and during the Kyrie, incensed the Oblate Cross and Preface from the Constitution. (See photo of cross and constitution)

At lunch Fr. Rufus started us singing Happy Birthday to Fr. Warren Brown (he and Mary share a birthday, although he is considerably younger).

With each new Oblate I meet, I am able to share with them the talented men and women who are Associates in the USA and Mexico and how you carry the charism into the world.  Thank you for your commitment to bringing the Good News to those most in need