Last Wednesday, the 5th of October, 14 Quex Road, London became ‘Denis Hurley House’. The naming ceremony was part of a Service of Blessing led by the Provincial of the Anglo-Irish Province, Fr. Willie Fitzpatrick and Cardinal Cormac Murphy O’Connor, together with the former Bishop of Leeds, David Konstant, and the Administrator of Durban Cathedral in South Africa, Fr Stephen Tully.

The terrace house is home to the Oblates’ Partners in Mission programme, through which people of all ages are invited to share in the Oblate mission by witnessing to the liberating presence of Jesus Christ and proclaiming his Kingdom to the most abandoned. A key focus of the project is to provide people with a variety of opportunities both at home and abroad to experience mission among the poor and marginalised.

And soon, the Denis Hurley Association, currently being set up in Britain as a charitable trust to raise funds for alleviating poverty and destitution in Durban, will be based here too. In his word of welcome, Fr. Lorcan O’Reilly OMI, Director of the Partners in Mission project, expressed gratitude for the presence of the patrons of the Denis Hurley Association – Cardinal Cormac Murphy O Connor, Bishop David Konstant, Mildred Neville and Fr. Willie Fitzpatrick OMI, Provincial of the Anglo-Irish Province. 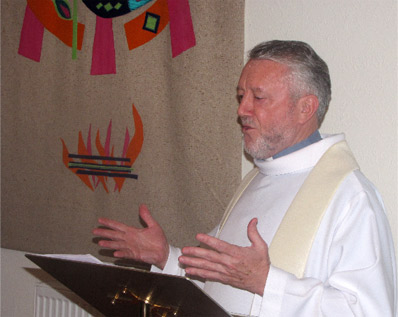 It is fitting that 14 Quex Road will in future be known as ‘Denis Hurley House’ to honour the late great Archbishop of Durban, who was an Oblate of Mary Immaculate. Archbishop Hurley was a Father of the Second Vatican Council, a distinguished liturgist, a courageous and unflappable foe of the apartheid system, a dedicated prophet of justice and reconciliation in his native South Africa and a revered pastor in the Province of Natal.

In his homily, Fr. William Fitzpatrick said that St Eugene de Mazenod, founder of the Oblates, had challenged his followers to “leave nothing undared for the Kingdom of God” in the service of the poor and abandoned. “Archbishop Denis 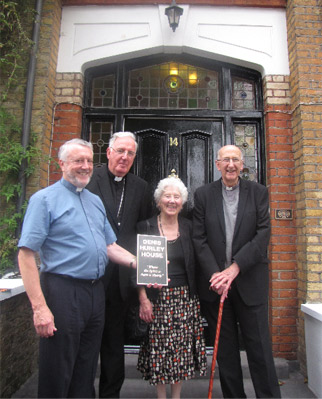 Hurley was one such man”.  Bishop David Konstant reflected that Denis Hurley grew to greatness by his refusal to accept injustice, his ability to take risks in the course of doing what was right and his cheerful respect for the underdog.

Bishop David said: “He had huge courage. I met him when he had been taken to court accused of undermining the police. Bishops from around the world came to his defence and the case was dropped, but instead of going quietly he stood and spoke at length, to great effect, condemning the corrupt, cruel apartheid system.”

In reflecting on why the new name resonates with the members of the Partners in Mission team Ronan Lavery said, “while I feel very proud that we have adopted Denis Hurley as the patron of the Partners in Mission house, I also feel slightly nervous!  For it falls on us, in collaboration with the vowed Oblates of our Province, to continue the mission handed down to us by St. Eugene, and through Denis Hurley. We, the Oblate Partners in Mission team, have some big shoes to fill. We are called, everyday, to strip away the layers of prejudice which many people in our society today are forced to wear. We are challenged to look at all those whom we meet through the eyes of Christ- and to call others to do the same. This is a difficult task, but one which is made so much easier when we have the inspiration of great men such as Eugene, Denis, and many other great Oblates, to guide us in our work. “