As a young man, Fr. Nicholas Harding, was educated at one of the world’s truly elite universities. He studied at , near , working towards a Masters in Public Health. His professors were some of the brightest minds in the field. He was surrounded by magnificent buildings.

Today Fr. Nick is receiving an even more valuable education in . He is being taught, not by college professors, but by laborers, sick people and children. He is surrounded by shacks and waste in the streets. And he wouldn’t have it any other way.

“At the university, things were going well for me on the outside,” he said. “But inside, I felt stagnant, and in reading the Gospel, I knew something was going to have to change.” 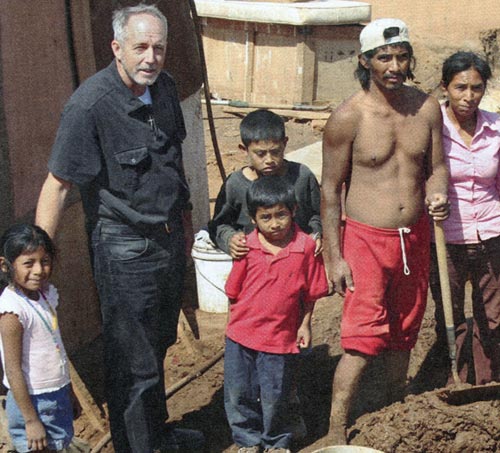 In May of 2011, the change he longed for came to fruition when Fr. Nick professed final vows as a Missionary Oblate. It was the culmination of a unique journey across the globe and in the soul.

Father Nick was born in 1952 in but his family moved frequently because of his father’s work. He spent years living in , and .

After university, he spent seven years working in legal services, helping low-income people navigate the court system in and . While in , he became acquainted with the work of the Missionary Oblates.

He entered the Oblate novitiate in 1987. He then pursued theological studies in . He left the Oblates to examine a calling to monastic life. Eventually he was ordained a diocesan priest in .

For nearly ten years, Fr. Nick worked in parish ministries in and taught courses in spirituality at the local seminary. But he knew something was missing. He didn’t have the same sense of community life and missionary charism that he had experienced with the Oblates.

So in 2007, Fr. Nick reentered the Oblates. He was assigned to the La Morita mission in . The man who had traveled the world to find his calling had finally found a place to call home.

La Morita is far removed from the hallowed halls of Harvard and the suburbs of . It is a neighborhood of about 180,000 people. Homes are made of scrap wood and metal. A drug war has engulfed the region for the past several years, resulting in the murder of 1,000 local residents annually. The survivors live in constant fear for their safety.

In addition to caring for the spiritual needs of the people of La Morita, the Oblates also help provide healthcare for the poor. A medical clinic established by the Oblates at their main parish is a lifeline for local residents.

Father Nick spends much of his time in La Morita, traveling to the Oblates’ eight chapels, where they celebrate Mass more than 20 times a week. The chapels are made of discarded building materials. Leftover office chairs, tattered and speckled with paint, serve as seating. Cracks between the plywood walls offer the only ventilation on hot days. The jagged gravel serves as both the church floor and as kneelers for the faithful.

As Fr. Nick celebrated his profession of final vows, the Oblates and the people of La Morita were also celebrating another special occasion — the 150th anniversary of the death of the Oblate founder, St. Eugene de Mazenod.

The parallels between the Oblate founder and Fr. Nick are many. Both men came from successful families; both received the finest education and both traded in the “good life” in order to be a “good shepherd” to some of the world’s poorest people. As St. Eugene was dying, his final words to his brother Oblates were: “Practice well among yourselves charity, charity, charity and outside, zeal for the salvation of souls.” (Oblate World Province, October 2011)