Fifty-six Oblates (37 Italians and 19 Spaniards) met on January 16-18 for a joint assembly in view of the unification of the Oblate provinces of Italy and Spain.

Most of the work was devoted to the discussion and approval of the “Statutes of Unification” which will govern the new “Mediterranean Province” to be born from the coming together of the Spanish and Italian provinces. The statutes have now been sent to the Central Government for their approval and will be then returned to the new province for an experimental term of three years.

The two presidents of the Assembly were the two provincial superiors: Fr. Nicola PARRETTA (Italy) and Fr. Otilio LARGO (Spain); the moderator was Fr. Salvatore DE GEORGE from the United States. Also present was Fr. Yves CHALVET, provincial of France and president of the provincial superiors of Europe, as well as some members of the General Administration. 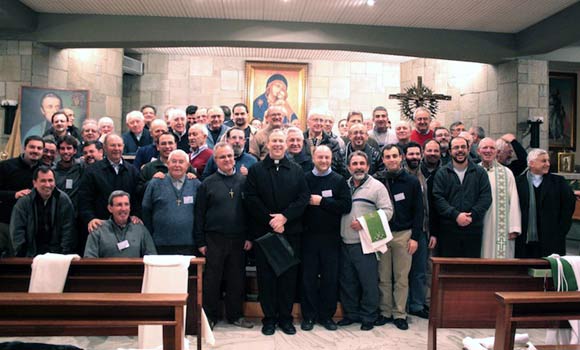 Fr. Louis LOUGEN, the Oblate Superior General, presided at the concluding Eucharist; also present were laity and youth from the Roman Oblate family.

The official beginning of the new religious province, the “Mediterranean Province,” will happen at some time in 2012. The new province will comprise 253 Oblates involved in the evangelization of eight nations. (P.C.){jcomments on}