The Missionary Oblates in Ukraine have started a new ministry to allow the Catholic faith to shine in a country where Catholicism was hidden for generations.

The Oblates have created a new “media community” to share the Catholic Church with more Ukrainians. Much of their work is through the Catholic Media Center created by the Ukrainian Episcopal Conference. 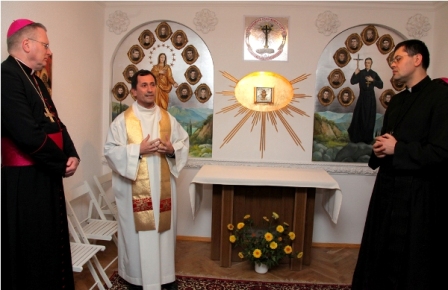 “In Ukraine there are less than one million Catholics in a population of 46 million,” said Fr. Pavlo Vyshkovskyy, O.M.I. superior of the new media community. “We now have the opportunity to proclaim Christ to those who have never heard of Him throughout the entire 20th century when it was forbidden to preach the Gospel in Ukraine.”

The Oblates are responsible for the Center’s Information Agency which sends, by means of the Internet, daily information in Ukrainian about the local and universal Church and the Holy Father. The site, www.catholic-media.org, is visited by over 12,000 people daily.

The Oblates are also involved in the publishing of The Waterfall, a monthly magazine designed for young people. The Waterfall is the largest Catholic magazine in the former Soviet Union, with a monthly circulation of about 10,000. Recently the Media Center began to publish a new magazine for children ages 3-8 called The Little Waterfall. 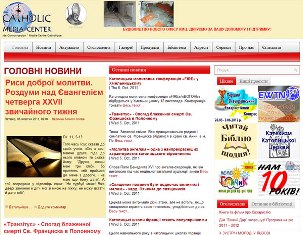 . “Presently we already have the website in place, www.ewtn.org.ua, but there is still a lot to be done before the programming can begin,” said Fr. Vyshkovskyy.

The Ukrainian Oblates draw inspiration from the 22 Oblate Spanish Martyrs who were murdered in 1936 during the time of Communist and Socialist persecution. They have even made the Spanish martyrs their patrons.

Father Vyshkovskyy said he and the other Oblates at the Media House feel a special connection with the martyrs. The Communists tried to silence the Oblates in Spain in the 1930s, and today the Ukrainian Oblates are working to reawaken the Catholic faith in a former Communist country.{jcomments on}