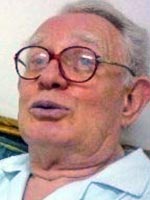 Shortly after becoming a priest in 1964 Fr. Norberto Schlechter, O.M.I. was sent to “hell” – and he has been grateful ever since.

At the age of 31 Fr. Norberto left his native Germany for the Chaco area of Paraguay in South America. Chaco was known as the “green hell” by his brother Oblates for its difficult living conditions among the beautiful landscape rich with vegetation and wildlife.

It was quite a culture shock for the young priest. But Fr. Norberto said the “green hell” quickly became “my land.”

“I believe that I will never return to Germany again,” said Fr. Norberto, who is now 78 years old. “Paraguay is my home. I am happy here.”

Home as a child was also a form of hell for Fr. Norberto.

He was born in 1933 into a family of coal miners in Dormund, Germany. World War II began in 1939 and Norberto along with his mother and siblings moved to a different part of Germany to avoid the air raids. Their father had to stay back to work in a factory.

“When we returned in 1945 we found our house had been destroyed, and we did not know if our father had survived,” said Fr. Norberto. “We eventually found him living at the house of an aunt.”

As a boy Fr. Norberto felt called to the priesthood but never expressed his feelings to his family our friends. As a young adult he shared his desire to become a priest, and was relieved when his family was overwhelmingly supportive.

“My family supported me because at the time it was an honor to have a son become a priest,” said Fr. Norberto. “But it is God who does the inviting, not your family.”

Father Norberto chose the Missionary Oblates because they are, in his words, “the roads that lead to God.” The Oblates had staffed his local parish. As a boy he had read magazine articles as a child about their adventurous missionary endeavors.

Less than a year after his ordination Fr. Norberto was on a ship headed for Paraguay. He knew almost nothing about the country – but he had faith in God and his fellow Oblates that he was on the right path.

Father Norberto arrived in Paraguay on December 2, 1964. He knew right from the start that his ministry was not going to be easy. He couldn’t even get to his church because the roads were in such bad shape. So he had to take a boat up the river.

For the next 48 years Fr. Norberto lived in small villages in the Chaco region. The area is sparsely populated and consists mostly of native people. Many people Fr. Norberto encountered knew nothing or very little about the Catholic faith. They also faced many hardships caused by extreme poverty and disease.

Today Fr. Norberto’s home is the simple chapel at the Oblate mission of Villa Morra. The silence in the chapel is frequently interrupted by the creaking sound of door hinges as people young and old come to visit with the elderly missionary.

Each week hundreds of people seek him out. From Fr. Norberto they receive advice, hope and above all, the “sacrament of pardon.”

Behind a discreet, light-colored door, daily and for several hours, Fr. Norberto fulfills “his mission” – hearing the confessions of those who wish to celebrate the Sacrament of Reconciliation. He lives his vocation primarily in a tiny space in the chapel, ventilated by a simple wall fan.

Father Norberto gives penitents a sense of serenity and peace – along with a good dose of humor. For much of the day his legs rest on a bench due to the infirmities of old age. 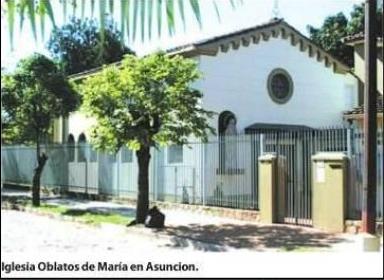 “It’s a good service (confession), but it is also tiring when you are there all day. But I am the only beggar who has time for that,” he laughs.

But it is the Sacrament of Reconciliation where Fr. Norbert spends most of his time – and where he finds the greatest joy. He gently reminds visitors that God can forgive every possible sin, and that the person who is unwilling to be forgiven is making the biggest mistake of all.

“In the Sacrament of Reconciliation we speak not of feelings but of reality,” said Fr. Norberto. “It is God’s pardon, something that goes well beyond what we feel.”

Father Norberto has found the reality of God’s love in a tiny chapel in Paraguay. In a place others call hell, he has found paradise.{jcomments on}