Zambia’s Oblate formation community moved to its new location in Makeni only in October last year. After seeing the poultry and the big field of vegetables in the back yard garden, the impression a first time visitor would have of the place is that the occupants may had been settled there for a longer period. The community in Makeni grows vegetables, not only for consumption but also for sale to the people around the community and to the city at large. Produce from the garden is sold at wholesale price in one of the city’s biggest market called Soweto, and in two other densely populated areas namely, Chawama and Kabwata. Efforts are also being made to sell the vegetables in one of the leading chain supermarkets.

The garden and poultry are under the care of Oblate Brother George MANDONA who is assisted by four employees. 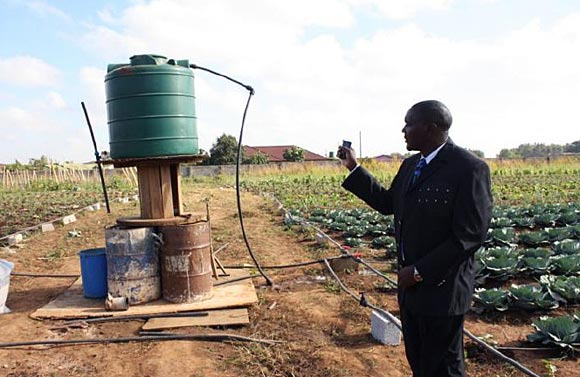 Currently, the garden has cabbages, onions, Chinese cabbage and tomatoes on a large scale. Potatoes, green pepper and eggplants are solely for the community. Other crops grown are indigenous bondwe and impwa. 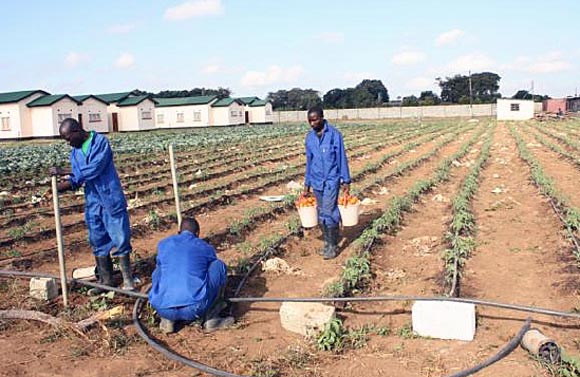 About 21,500 tomato plants have been planted. Upon maturity, Bro. George hopes to collect 120 boxes of tomatoes per week which will enable the community to raise an estimated 10 million Kwacha (US$ 2,000) from the sales. His estimates are based on the calculations he made from the experimental plants which were planted earlier this year. Ten thousand heads of cabbages were planted. Like tomatoes they also proved to be profitable and thrived in the soil.
Simple chicken composite manure is added to the soil for the plants to grow healthy; fertilizer is also applied. Water supply is in abundance and the flow is continuous. In watering the crops, drip irrigation is used; the system was set up by Bro. George and the four helpers. So far the system seems to be working well though Bro. George thinks a 20,000 liter reserve tank would be ideal as opposed to the 1,000 liter tank they are currently using.
Another farm feature in Makeni is the poultry house. The community has been keeping chickens since November last year. The poultry has 350 layers from which 9-10 trays of eggs are collected every day. Broiler chickens are also reared. Plans to build a bigger poultry house for the broilers are underway as they have proved to be appreciated by the surrounding community. This is because of the healthy feed they are given.
Bro. George also hopes to plant an orchard, where he can plant fruits such as bananas, mangoes and citrus fruits.
For Bro. George, this is just the beginning of becoming self-sustainable. His dream is to enable the community to support itself using the funds raised from both the poultry and the garden. (By Musonda Chipili in OMI Zambia, March-April 2012)