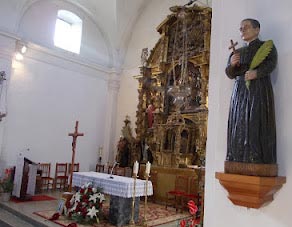 July 24th marked 76 years since the martyrdom of seven Oblates and the father of a family, beatified last December. To commemorate such a significant date, various celebrations were organized in different places. Therefore, around July 24th, the town of Villaverde de Arcayos celebrated the blessed martyrs, Justo GONZÁLEZ and Pascual ALÁEZ; statues of the two were blessed and placed for the devotion of the people in their parish church. The Eucharist was presided by the Oblate Bishop Ramiro DÍAZ, a son of the same town. Joining him and other Oblates, some of whom were also born there, were numerous friends and family members of the two martyrs.

There was a Mass celebrated also in Santa Marina del Rey, this time presided by the diocesan bishop, recalling the martyr Juan Antonio PÉREZ. Although martyred in November, they also celebrated Blessed Gregorio ESCOBAR in Estella and in Prioro, Blessed Serviliano RIAÑO. In similar celebrations presided by their diocesan bishops or their parish pastors, the memory of other martyrs was celebrated. It is summertime in Spain and at this season, many go back to their hometown. For that reason, they chose these dates so that no one would miss the opportunity. 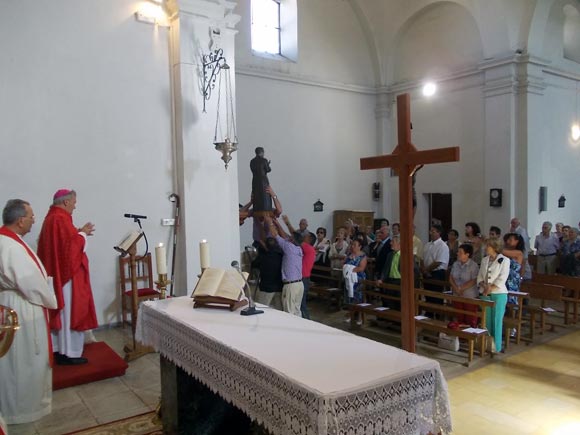 In our Oblate house in Pozuelo de Alarcón, a large group of the faithful and of Oblates also gathered to commemorate the martyrs. On the 24th, everyone wanted to be near the house of the martyrs to remember what happened there. The walls and rooms of the house still speak and give witness to the sacrifice of our martyrs: their oblation, their strong commitment to community, their Eucharist-centered prayer, their love and forgiveness of their enemies. Visiting these areas on pilgrimage has a major impact on all those who have the opportunity to do so. During the homily, mention was made of the testimony of Fr. Felipe DÍEZ, one of the survivors. The militants went about grabbing all the members of the community, one by one, pointing their weapons at them, and locking them in a small room. In passing, one of the formators invited them to make the act of contrition so as to receive general absolution. Fr. Felipe said: “I wanted to pray the prayer, Lord Jesus Christ, but I couldn’t get it out. Indeed, what came out were acts of love for God, of forgiveness for those who we thought were going to shoot us and offering my life for those who were killing us, for the Church and for Spain.” 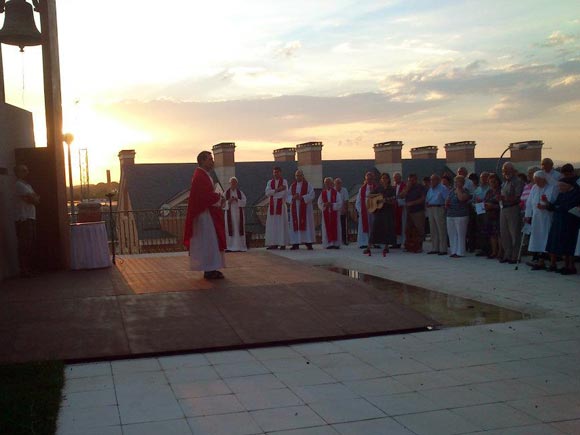 To end the celebration at Pozuelo, all participants went to the monument, located outside of the house, which symbolically brings together and commemorates the martyrdom of our blessed brothers. There we renewed our baptismal promises, and each person could pray, asking for some special grace, while offering a lighted candle that was left in front of the main part of the monument. This consists of four large slabs of granite in which is carved a cross, surrounded by the names of all the martyrs, with the image of the Virgin Mary enshrined at the foot. All renewed their commitment to being witnesses of the love and forgiveness of Jesus at this time in the life of the Church, symbolized by a beautiful historic bell familiar also to the martyrs, and which rang out a beautiful sound as each of us was invited to renew our baptismal promises. The Litany of the Blessed Martyrs and the praying of the Salve completed this prayer which ended at the same time as the setting sun flashed red in the sky over Madrid. Blessed Oblate Martyrs of Pozuelo, pray for us.{jcomments on}