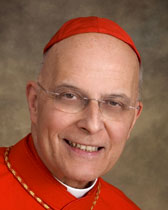 Last week on Aug. 15, the church celebrated the feast of the Assumption of the Blessed Virgin Mary into heaven. In his homily for Mass that day, Pope Benedict XVI preached this beautiful passage:

“Today there are many things said about a better world in the future: it would be our hope. Whether and when this better world will come, we do not know, I do not know. It is certain that a world that distances itself from God does not become better, but worse. Only the presence of God can guarantee a good world too. But let us put this aside. One thing, one hope is certain: God awaits us, he attends to us, we are not headed for a void, we are expected. God awaits us and, passing to the other world, we will find the Mother’s goodness, we will find our loved ones, we will find Eternal Love. God awaits us: this is our great joy and our great hope that is born precisely from this feast.”

I read this homily on the day I underwent surgical tests to ascertain whether or how my own body was re-infected with cancer. The tests have shown that a nodule removed from my liver was cancerous and that there are cancer cells in the right kidney. Other tests are following as I write this. Tests bring further questions: is the cancer a return of the cancer in the bladder that was removed six years ago? Is it a new primary? Where else might it be? When all the tests are completed, some of these questions will be answered, but medical knowledge remains limited even today. With the answers, a course of treatment will be decided on. Again, there are always limitations to our understanding of what is best. Since there seem to be no more tumors to be removed, the treatment will probably be some form of chemotherapy, which is supposed to cleanse the entire system of still clandestine cells in the bloodstream.

Prayers and messages from people everywhere are a support to Cardinal George and a significant aspect of his continuing health journey.

Messages can be sent to the cardinal through the archdiocesan website, www.archchicago.org or by sending notes and cards to Francis Cardinal George, OMI, Archbishop of Chicago, 835 N. Rush St., Chicago, IL, 60611. He will receive every message sent to him.

In the past six years, I have collected a lengthy list of those who have asked me to pray for them because they have cancer. It’s not a small club, and each one has his or her story about the disease and its treatment. Sharing experiences helps, as does pooling knowledge among experts. The experts here will be consulting with doctors in the Mayo Clinic, where I’ve been going for checkups every five years, so that they could follow the consequences of my childhood bout with polio. As one of the doctors of the clinic told me when I was 35 years old and chair of the board of an Oblate sponsored nursing home in Rochester, Minn.: “You have a stressful job, and you’re the first generation of polio patients who will grow old with the disease. You’re also the last, because of the effectiveness of the Salk vaccine. We’ll follow you until you get the disease that will kill you.”

If we have to die, why should we live, especially with disease and pain? Each person lives in several systems that answer that question, for better or worse. For many, the desire to love and raise their children and grandchildren gives the basic meaning of their lives. For others, it might be a great project or a historical achievement, which lifts an individual life into a web of consequences that last long beyond physical death. These days, control of one’s personal life is so primary that many see no point in living beyond the moment when they lose a sense of personal autonomy. That’s why assisted suicide has become an arguable “right’” in some people’s system of life. That is, of course, a sign of despair: the world has no meaning beyond the point where I can feel I am in control. But we are never in control. That is a Promethean dream that ends in meaningless tragedy.

People who live this life in relationship to God begin even now to live in his kingdom, proclaimed by the prophets and personalized in Jesus. Eventually, it is this immediately tangible world that becomes the “strange land” and it is the next that beckons us as our true home. This experience cannot be well expressed or understood in the public discourse, because God’s is uniquely a kingdom of self-sacrificing love that transcends this world even as it permeates it in quiet ways. Systems of economic and political power cannot make sense of the realities that are known to us in faith. The faith is often reduced to a political or economic framework that limits understanding. The legal system also limits understanding by forcing facts that can be “documented” into stories that remain always inadequate to actual experience and often concoct an alternative universe.

When I was a young man, I prayed that I might live in such a way that God’s will for the world’s salvation might be realized. That prayer was first answered in a call to make vows of religion in a missionary society consecrated to preaching the Gospel to the poor. It has worked itself out in trying to teach even when I saw the limitations of my own knowledge and of the ideas I was trying to impart, in counseling and coming to terms with the unknown sources of a person’s inner dynamics, in governing my own world-wide religious society and three very different dioceses, in participating in gatherings that help the pope govern the universal church. I experienced limitation in disparate experiences that told me I was no more in control than were the poor I was visiting or living with: being abandoned in an Eskimo fishing village in Greenland; being caught in an exchange of gunfire between guerillas and the Filipino army in Mindanao; being part of a manifestation and attacked by the forces of order in “La Grande Place” in Brussels; walking through the squatter camps in Santiago, Chile, with the Vicariate of Solidarity under the Pinochet regime; being bombed in Jaffna, Sri Lanka, at the start of that country’s long civil war; bargaining for passage and perhaps for life, with soldiers who controlled the crossroads in the interior of the Congo; being refused entry to apartheid South Africa and deported helplessly from India, living in the indignities and shadows of Communist control in the lands of Eastern Europe. I learned I was not in control, and I also experienced personally what the Psalmist chanted long ago: “Put not your trust in princes.”

Without control, we still need security. Throughout life we learn whom we can trust. Sometimes that trust is betrayed, and life itself loses some of its meaning. The betrayal of trust by priests or bishops is especially hard in the community of faith. But that community is also the place where we learn what the Holy Father preached so simply and beautifully on the feast of Mary’s Assumption: God awaits us because he is with us now and wants to bring our life to its fulfillment in his kingdom. History is what God remembers; and God interprets history through the lives of the poor, the first citizens of his kingdom.

We experience the network of faith and love that is God’s Kingdom in our prayers for one another. I am profoundly grateful for the prayers already said and those promised: the Masses offered, the rosaries meditated, the novenas prayed. Over the years, I have seldom written about myself in this column, because the bishop’s job is to point to Christ, not to himself. Even in what will probably be a trying time for me in the next several months, I plan to say little about my cancer and its treatment. How can we know what to say when our knowledge is so limited? I would hope that people might reflect upon God’s goodness and grow closer to Christ. Then even my sickness and, at some point at a still unknown time and way, my death will be an answer to what I prayed many years ago: that I and all those God has given me to know and love here might live in such a way that God’s will for the salvation of the world will be realized. God bless you.