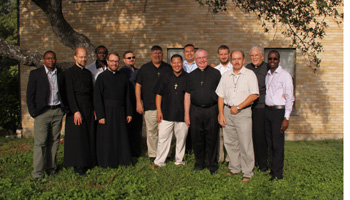 After a busy summer of ministry, language studies, retreats and vow preparations, the scholastics at George Sexton House of Studies in San Antonio are back to the daily grind of classes at Oblate School of Theology. There are ten Oblates in first formation at the San Antonio scholasticate. They are led and mentored by the superior, Fr. Raul Salas and his team: Frs. James Allen and Paul Waldie.

Classes were not the only thing that took place this month, but also the perpetual vows mass for two young Oblates. 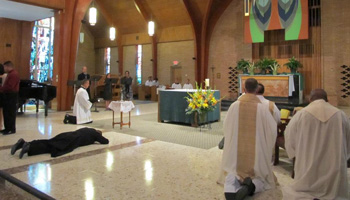 San Antonio, Texas, and Ottawa, Ontario, were the settings for the final profession of vows of Brother Juan Gaspar and Brother Daniel Janulewicz, who are in their last year of studies at the Oblate scholasticate in San Antonio. Brother Juan Gaspar pronounced his vows at the Immaculate Conception Chapel at Oblate School of Theology on September 1. Brother Daniel Janulewicz had his celebration of final vows at St. Hyacinth Parish in Ottawa one week later, on September 8. Juan is a member of the U.S. Province; Daniel belongs to Assumption Province.

Juan was born in 1977 in Houston. He is the oldest of seven brothers born to Mexican immigrants, Maria and the late Benjamin Gaspar. Before entering the Oblate pre-novitiate in Buffalo, N.Y., in 2006, Juan earned a B.A. degree from the University of St. Thomas in Houston. Following graduation, he taught in elementary schools in Houston. After novitiate in Godfrey, he pronounced his first vows in 2008 and since that time, has been a member of the George Sexton House of Studies community in San Antonio. During the 2011-12 school year, he was at St. Jude Shrine in New Orleans for his pastoral internship. He is completing his Master of Divinity degree at Oblate School of Theology and hopes to be ordained a deacon on November 17, 2012. 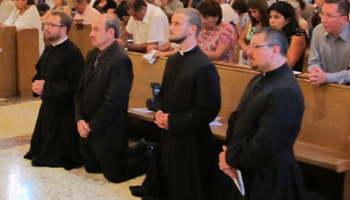 Born in Toronto in 1981, Daniel is the son of Janusz and Wanda Janulewicz, Polish immigrants to Canada. He has two sisters and one brother. Before entering the pre-novitiate in Buffalo, he acquired a university degree in computer sciences. He professed his first vows in Godfrey in 2008 and then began his theology studies at Oblate School of Theology in San Antonio. In 2010-11, he had a pastoral internship experience at St. Casimir Parish in Toronto. He too hopes to be ordained a deacon on November 17 and complete his Master of Divinity degree in May.

Presiding at the Eucharist of profession and receiving Juan’s vows in the name of the Superior General was the provincial of the U.S.very Rev. William Antone, OMI. Daniel pronounced his vows before the provincial of Assumption Province, Fr. Marian Gil, OMI. 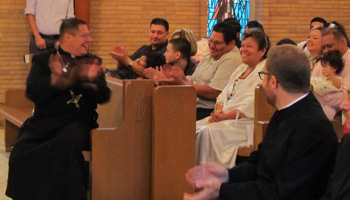 This school year, there are 10 scholastics residing at Sexton House, a truly international community: three from the U.S. Province; one from Mexico; one from OMI Lacombe Province; two from Assumption Province; and three from Zambia. There are also four scholastics from the U.S. Province on pastoral internship (in Miami, Belleville, New Orleans and San Fernando) and one is studying in Rome. 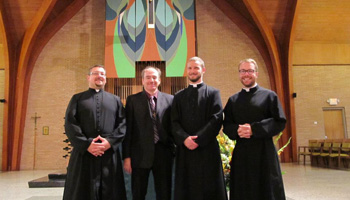 This international group of Oblates are taking part in TFE: Theological Field Education….or what older Oblates used to call “apostolate” or “ministry.” The big difference nowadays is that the TFE is arranged through the school of theology; there are learning contracts; supervision is quite focused; they reflect with a professor and peers on their experiences; and there is a certain sequence to be followed. First year students don’t begin their TFE until second semester. Second year students become involved in the RCIA process in a San Antonio Parish. In third and fourth year, there is a wider choice of experiences, but the choice is guided by OST and the local formation team.