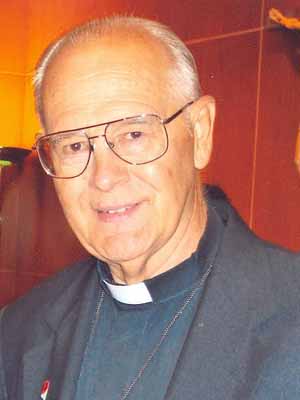 Fr. Charles Hurkes, OMI was born on July 17, 1932 to Charles and Isabel (Kranz) Hurkes in , where he attended Immaculate Conception Grade School.  He went to Our Lady of the Ozarks Junior Seminary, , in his sophomore year, 1947.  After graduation in 1952, he went to Immaculate Heart of Mary Novitiate, where he made his first vows on Aug. 15, 1953.  From there he went to Our Lady of the Snows Scholasticate, Pass Christian, MS, for his studies in philosophy and theology.  He made perpetual vows there on Aug. 15, 1956 and was ordained there by Bishop Richard Gerow on Sept. 8, 1958.

He taught philosophy from 1960-65 at Our Lady of the Snows Scholasticate.  The next 13 years he spent teaching courses in Social Psychology, Sociology, Sexual Ethics and the Humanities at St. Henry’s Seminary, .  During this time he authored the chapter “Judaeo-Christian Response to Violence” for the textbook Human Life: Our Legacy and Our Challenge.  In 1973 he became a founding member of the Belleville Diocesan Pro-Life Office and of the Belleville Area Right to Life Committee.  He began traveling throughout and other parts of the speaking on the many facets of the pro-life movement.

In 1978 Fr. Hurkes became Associate Director of Retreats and staff preacher at King’s House, .  In addition to conducting retreats, he served as Chairman of the Pro-Life Department for the Illinois Catholic Conference.  He was also the Congressional District Action Committee Liaison director on the Board of the Illinois Federation fro Right to Life, Inc., as well as being a committee chairman on the Peoria Diocesan Pro-Life Board.  He was one of the founding member of the Illinois Natural Family Planning Association.

From 1984-87, while on the staff of the Oblate Fathers Retreat House in , Fr. Hurkes served as a member of the Manchester, NH, Respect Life Board.

From 1987-89, he served as Chaplain to the English speaking Catholics in .  On his return, after spending a semester Sabbatical at the University of Steubenville, OH, he went to Christ the , as director and staff preacher.

In December 1993, he was transferred to to rebuild the parish community after the devastating 1993 flood.  He was named Pastor of St. Patrick’s, , and St. Michael’s, in July 1995.

In July 2000, Fr. Hurkes moved to , to become Newsletter Editor for the U.S. Province, while serving at the Basilica of the National Shrine of the Immaculate Conceptions and preaching occasional retreats in the area.