(Originally published by Marlene Quaroni in The Florida Catholic) 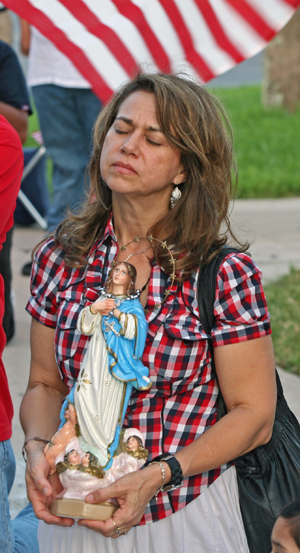 MIRAMAR — On the day that the United States celebrated its 200th birthday — July 4, 1976 — Oblate Missionary Father Alejandro Roque became a U.S. citizen.
“I was one of 10,000 people who swore allegiance to the U.S. at the Miami Beach Convention Center,” said the pastor of St. Stephen Parish after celebrating a Fortnight for Freedom Mass July 3. “This country opened its arms to me and my brother when we fled Cuba with the help of the Peter Pan airlift. Four years later we were reunited with our parents in Miami.”

The U.S. bishops called for the Fortnight for Freedom, a 14-day observance which began June 21 and concluded July 4, Independence Day. The two-week period was intended for prayer, study, and activities to defend recent challenges to religious freedom. June 21 is the vigil of the feasts of St. Thomas More and St. John Fisher, both martyrs who remained faithful to God in the face of persecution by political power.

St. Stephen was one of a number of archdiocesan churches that celebrated special Masses, prayer services and candlelight processions to mark the fortnight.

“Faced with the tribulations of our times, Catholics will use their greatest weapon, which is prayer,” Father Roque said in his homily. “One of the reasons that we became a nation is the freedom to practice our religion.”

However, unless something changes before January, the Catholic Church might have to go against its beliefs because of the Health and Human Services mandate that has been included in the Affordable Care Act, the new health insurance law. The mandate requires employers to provide contraceptives, sterilization and abortion-inducing drugs, such as the morning-after pill, to their employees. 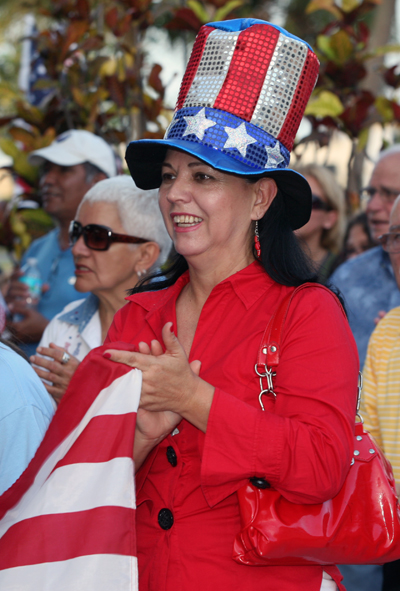 “Abortion and contraception is spelled SIN,” Father Roque said. “George Washington must be turning over in his grave.”

“If I could have entertained the slightest apprehension that the Constitution might possibly endanger the religious rights of any ecclesiastical society, certainly I would never have placed my signature to it,” Father Roque quoted from a 1789 letter Washington wrote to the Virginia United Baptist Churches.

“No provision in our Constitution ought to be dearer to man than that which protects the rights of conscience against the enterprises of civil authority,” Jefferson wrote in a 1809 letter to New London Methodist.

“The equal right of every citizen to the free exercise of his religion according to the dictates of conscience is held by the same tenure with all our other rights,” wrote Madison in a Memorial and Remonstrance Against Religious Assessment.

People of faith must speak out, Father Roque said, and God will do the rest.

After Mass, he draped himself in a U.S. flag which had been given to a parishioner’s family whose father was killed fighting for the U.S. in World War II. He thanked the parishioner for the Stars and Stripes and led a procession around the east parking lot of the church, which borders State Road 441.

The 200 or so people at the event carried large and small U.S. flags. Many wore red, white and blue, Uncle Sam hats and one person wore a Statue of Liberty costume. They sang patriotic songs and church hymns, from God Bless America to Yankee Doodle. 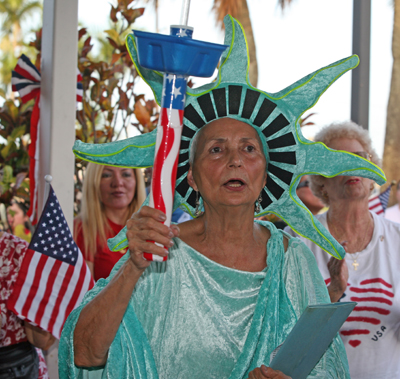 Desiree Bolanos carried a statue of the Virgin Mary. “She is the patron of the U.S. Our Lady prays and intercedes for us. I am praying for the culture of life,” said the mother of four children. “Babies have a right to life.”

Father Roque stopped at the north, south, east and west corners of the church parking lot to pray for various groups, among them soldiers, the president and his cabinet, representatives and senators and the cities surrounding St. Stephen Church.

“This is a little corner of God’s kingdom,” he said. “The drivers honking their horns as they pass by on 441 love their country. We are telling the world out there that we love America and we want to keep it the way our forefathers created it.”

This article was corrected after publication to refect the fact that Flag Day is not June 21 but June 14.
{jcomments on}
Tweet