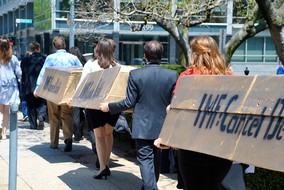 The International Monetary Fund Executive Board has approved the final 2.7 billion dollars from recent gold sale profits to support the world’s poorest. The total gold sales windfall has now reached nearly 4 billion dollars to benefit the most vulnerable. One of the most powerful institutions in the world decided the right way because ordinary people cared – and acted.

At first, the IMF barely acknowledged the profit and assumed it could remain in their general reserves. Word leaked out about possible major renovations of the IMF office space in Washington, DC.

In response, Jubilee USA, of which the Oblates are a member, delivered tens of thousands of petitions and organized 60 global partners to push the IMF towards debt relief. At the end of February 2012, the IMF Board made a decision on the first distribution of 1.1 billion dollars after Jubilee, the ONE Campaign, ActionAid and Oxfam International met with the IMF staff.

These efforts pushed the IMF to approve the first 1.1 billion dollar distribution AND the second 2.7 billion dollar distribution to support concessional lending in the Poverty Reduction and Growth Trust (PRGT) and extend a 0% interest rate that will make this trust available for future generations beyond 2014. While many of us have concerns about IMF lending, this 0% extension on existing loans will mean real relief for millions of people and translate into direct support for low-income countries.

For more information about Jubilee USA, please visit their website – and get involved! Go to: www.jubileeusa.org