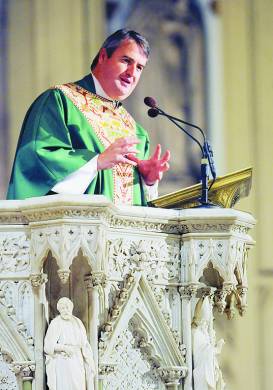 “We are all called to be missionaries,” said Father Andrew Small, O.M.I., national director of the Pontifical Mission Societies in his homily at Mass at St. Patrick’s Cathedral celebrating World Mission Sunday, Oct. 21.

“If you cannot go beyond your borders,” he reminded the congregation, then wherever you are “you can be one who heals, one who binds up wounds, forgives and reconciles, one who serves.”

World Mission Sunday, organized by the Society for the Propagation of the Faith, one of the Pontifical Mission Societies, is a day set aside for Catholics worldwide to recommit themselves to the Church’s missionary activity through prayer and sacrifice. It is celebrated annually on the next-to-last Sunday in October.

Sister Pauline Chirchirillo, P.B.V.M., is the director of the archdiocesan office of the Society for the Propagation of the Faith.

“The very nature of being a disciple of Jesus Christ is to be a missionary,” Father Small explained. “The missionary will be known because they serve, not because they came to be served.” He pointed to the two new saints as examples of those who lived lives of service and commitment to their faith.

St. Kateri, a Mohawk woman born in what is now upstate Auriesville, “was known for her commitment to her faith and she was rejected because of it,” Father Small said.

“Faith was central to her witness,” he said.

St. Marianne Cope, who lived in Syracuse and Utica, “did what she was called to do,” he said. She was the superior general of her order, the Sisters of St. Francis, when she was asked to set up a foundation to care for people suffering from Hansen’s disease, or leprosy, on the Hawaiian island of Molokai. 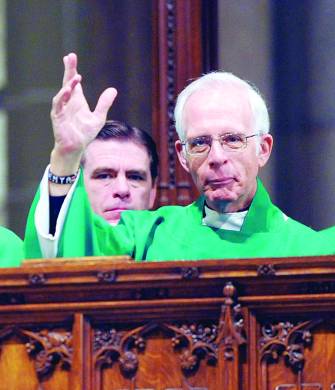 As superior general, Father Small said, she probably could have sent someone else to take on this task, but she went where she was needed and “spent the rest of her life serving there, binding up wounds.”

Both these new saints have the outlook of missionaries, he said. “A missionary sees the other as a child of God in their inherent dignity.”

We are all called in our baptism to “mark our life by seeing our friends and strangers for who they are.”

Father Small was joined at the altar by several missionary priests and representatives of missionary orders. Other missionaries and visitors were among the congregation, including Sister Louisa Huni-dadzie, the secretary general of the Society of the Holy Child Jesus.

Sister Louisa, who was born in Ghana and now serves in Rome, was visiting the United States for a leadership team meeting. After visiting with retired sisters living in Rye, she was invited to join the World Mission Sunday celebration at the cathedral.

Her order has provinces in Europe, Africa and the Americas, and is involved in many ministries, including education, she said. The example of the missionary sisters who taught in her Catholic school in Ghana inspired her vocation. “I loved them and wanted to be one of them,” she said.

“World Mission Sunday,” Father Small said, “gives us the opportunity to remind the faithful…of the fact that, by our baptism, we are called to be missionaries of faith, supporting that work of the Church in 1,150 mission dioceses.”

“We pray for the Church’s missionary efforts, and we give generously to the Society for the Propagation of the Faith,” he said.