On the banks of the Zambezi River, Fr. Michael Pfeifer, O.M.I. prayed for guidance as he faced one of the most important decisions of his priestly life.

It was March of 1983.  Father Michael was Provincial of the Oblates’ Southern Province in the United States.  He was considering whether to open a mission in Zambia, a land 10,000 miles away from his home in Texas.

After spending several days touring the country and talking to local Catholic officials, Fr. Michael gathered with the two Oblates priests who had accompanied him to Africa.  They prayed on the banks of the Zambezi to ask the Holy Sprit to guide them in their decision whether to take on such a challenging new ministry.

“It was a frightening decision in many ways,” said Bp. Pfeifer, now in charge of the Diocese of San Angelo, Texas.  “But we are missionaries, and as missionaries we must at times go to places where we have not been before.”

So Fr. Pfeifer made a giant leap of faith and committed to opening an Oblate mission in Zambia.

Over the next 30 years the Zambian mission would grow into a thriving Christian community of missionary activity and vocations.  When Bp. Pfeifer returned to Zambia last July to ordain four new Oblate priests, he knew that the decision he had made in 1983 on the banks of the Zambezi had been the right one.

“Our Zambia mission has exploded with new life by the grace of God and the hard work of the Oblates and the people of Zambia,” said Bp. Pfeifer.  “I now know that I made at least one really good decision in my life.”

Bishop Pfeifer knew plenty about missionary life before making his trip to Zambia in 1983.  He had been a missionary in Mexico for 16 years before being named Provincial for the Oblates’ U.S. Southern Province in 1980.

Oblates from the Southern Province had been serving in Mexico for about 40 years.  The Mexican mission was thriving, and it was time for Mexico to become its own province, no longer dependent on the United States.

So Bp. Pfeifer began looking for other mission territory.  The Oblate Superior General at the time, Fr. Fernand Jette, O.M.I. suggested he look at Africa.  That suggestion didn’t sit well with everybody.

“There was definitely some disagreement about going to Africa,” said Bp. Pfeifer.  “Mexico was just across the border, but we knew nothing about Africa.  It also meant that we would have to pull back from some of the good work we were doing in Texas.”

Once the decision to send missionaries to Zambia was made, the next step was to decide who would go.  Four Oblates accepted the challenge: Frs. Paul Duffy, Jack Joyce, Pat Gitzen and Bro. John Keplinger.  Father Duffy would eventually become the first Bishop of the Diocese of Mongu. 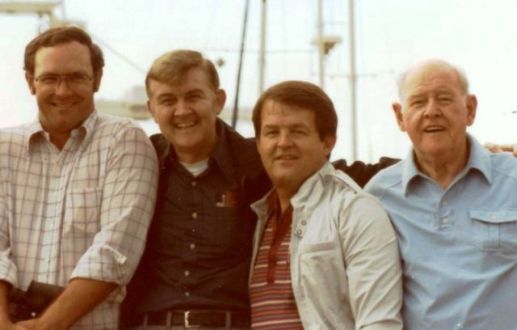 These first Oblates settled in Lukulu, but soon their ministries expanded into other towns and villages throughout western Zambia.  They established parishes, schools, a nutrition center, a Catholic radio station and a hospice for AIDS patients.

Before long Oblate vocations began to thrive.  Today there are more than 90 Zambian men in various stages of formation for religious life.

Bishop Pfeifer assumed that he would one day become a missionary to Zambia, but that never came to pass.

“I thought that once I was finished being Provincial I would join them in Zambia,” said Bp. Pfeifer.  “But Pope John Paul II decided to make me a bishop so I never got to go.”

Bishop Pfeifer was consecrated Bishop of the Diocese of San Angelo in 1985, a position he still holds today.  He made a short visit to Zambia that year, but hadn’t returned again until his visit last summer.

One of the highlights of Bp. Pfeifer’s trip was to preside at the ordination of four new Oblate priests.  He said the ceremony was one of the most inspiring events of his life.

He also got a chance to see the Oblate Zambia Delegation as it becomes more self-sustaining.  In the early days nearly all delegation funding came from the United States.  Today more and more ministries in Zambia are being funded by the Zambian delegation.

“There is always a struggle when it comes to finances, even in the United States,” said Bp. Pfeifer.  ‘But if we put the Spirit where we want to put the dollar sign, we will make it.”

Another sign of the growth of the Zambia Delegation is the assignment of the first Zambian priest to a foreign country.  Father Francis Kabika, O.M.I. is now ministering in Mexico – ironically, in some of the same missions that were staffed by American Oblates decades ago.

As he reflects on the success of the Zambia mission, Bp. Pfeifer keeps coming back to one word – trust.  It was on the banks of the Zambezi River nearly 30 years ago that he placed his trust in God and his brother Oblates, and he was not let down.

“Sometimes we just don’t trust the Lord enough, but when we do He will bless us,” said Bp. Pfeifer.  “And in Zambia we today now have the beautiful result of that trust.”