Frs. Miguel PIPOLO, (Latin America & Haiti), Joseph GOMES, (Asia-Oceania), Tomas VYHNALEK (Europe) and Walter Butor (Canada-United States) attended, together with Daniel LeBlanc (UN), Jeevendra PAUL (OMI Development) and Kennedy KATONGO (Zambia), invited by the Superior General. Francisco O’Conair, OFM, was facilitator. Previous to the meeting, Francisco and Camille met the Central Government to address the meaning of JPIC in the Oblate Mission. One clear directive from the CG: JPIC is the responsibility of all Oblates; we are all involved in building right relationships, living among the poor and adopting a simple lifestyle. 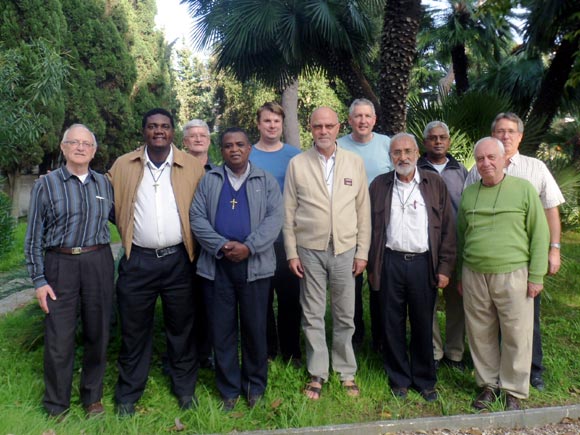 Reports revealed growing JPIC activity in the Regions. Since 2005, the Comision Oblata Latinamericana de Justicia, Paz y Integridad de la Creacion elaborated statutes and Brazil has incorporated OMI JPIC statutes in its Vade Mecum. In Europe, Poland reaches out to people living on the margins of society, teaching human rights, civic freedoms and democracy. Ireland has chosen JPIC as a priority with the involvement of lay people. Africa is totally dysfunctional with illiteracy, HIV/AIDS, family breakdown, plundering of natural resources, religious fanaticism, civil war and corruption at all levels. Working for peace and justice is our only hope, said Didier, and is the responsibility of all the baptized. There are plans to organize a JPIC commission in each parish, district, province and Oblate unit. Listening to Kennedy’s passion for justice and reading Zambia’s 3-year plan, we can say with John the Baptist: “The axe is already at the root of the trees” for changes in Africa.

In Asia, the Philippine Province works for social transformation in all four districts. The vision statement suggests their line of action: respecting human dignity and human rights, living truth and love, promoting justice and peace and acting as stewards of God’s creation. Also dealing with Christian-Muslim relationships, it was good to see an Oblate following the live coverage of the Universal Periodic Review of Pakistan at the Justice and Peace Commission centre in Multan. At the Centre for Society and Religion in Colombo and the Centre for Peace and Reconciliation in Jaffna; exchange programs between North and South Sri Lanka are being held with discussions on the violation of human rights and efforts at building peace and reconciliation. With a committee organized at the regional level, they hope to set up a regional desk to coordinate activities in the Region. They also wish to incorporate JPIC in the formation programs.

Heavily involved on a continuing basis in truth and reconciliation action for the past 20 years, Canada has added a focus on environmental issues. Lacombe Province has a committee working on mining and Notre-Dame-du-Cap on eco-spirituality. St. Peter’s Church in Montreal has become a beacon of hope for persons affected by HIV/AIDS. In the United States, there is a well-organized JPICOffice with a strong focus on lobbying, ethical investments, organic community gardening, offering internships, and a host of activities in many countries where Oblates are present.

Revising the statutes was a two-day work, with time off for the funeral of Fr. Theophile LE PAGE. We then saw a PowerPoint presentation on the spirituality of JPIC and a short history on JPIC in the Church and in the OMI Congregation. The committee chose three new internal core priorities to better integrate JPIC into the life and mission of our Congregation. They are:

1) That all Oblates have a clearer understanding of what Justice, Peace and Integrity of Creation and Catholic social doctrine entail for our life and mission.

2) That in every Unit and Region there be a trained JPIC animator and committee and who are given enough sufficient time and resources to fulfill their ministry.

3) That concrete JPIC values and praxis be integrated into all initial formation programs and centers where our men pursue their academic studies.

Responding to the invitation to participate in the “Triennium of Preparation” for the 200thanniversary of the Congregation, the Committee chose the “Spirituality of JPIC and how it relates to community” as its theme for 2013-2014, and “Catholic Social Teaching as it relates to OMI documents” for 2015-2016. (Camile PICHÉ, Director of the JPIC General Service)