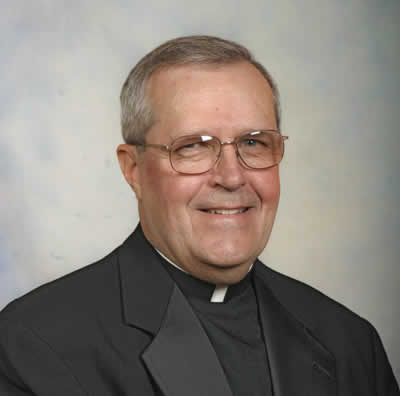 In September of 1958, when I was asked to go to Rome to study philosophy and theology, I was not happy at all. I gave all of my reasons why I should not go, but the superior decided otherwise. Since my classmate, Herb Nelson, and I were informed somewhat late, we had to hurry to obtain our passports and visit our families to say good-bye for our seven year absence from them.

We sailed from New York on October 3, 1958, and periodically during the Atlantic crossing, we were informed that Pope Pius XII was not doing well and that his health was deteriorating. On October 9, the announcement came that the Pope had died. On October 14, the day we arrived in Rome, Pius XII was buried in St. Peter’s.

Classes were delayed for a week. That was very fortunate since we arrived so late. Then the excitement began with the calling of the consistory to elect the new Pope. At the end of each session of the consistory, we would hurry by foot to St. Peter’s from the scholasticate on Via Vittorino da Feltre near the Coliseum. After several of those trips, we decided to wait to make the trip to St. Peter’s until we heard the news of white smoke. On St. Peter’s Piazza, there was talk of Montini (Pius VI) even though he was not a cardinal at that time. When the announcement was made that the new Pope was Angelo Giuseppe Roncalli, the big question was “Who is he?” That was October 28, 1958. The comment was made that he wouldn’t be around long due to his age and that he was a transitional Pope. That was John XXIII.  Why and how he chose that name has been the topic of much discussion. I personally believe he chose it for the simple reason that it was a family name and also his middle name. Why complicate things?

As was the tradition in those days at the scholasticate in Rome, whenever the Holy Father went somewhere for Mass or a ceremony, the scholastics were “encouraged” to go. When John XXIII announced the Vatican II Council at St. Paul’s Outside the Walls on January 25, 1959, we were privileged to be there. To say there was an element of surprise would be an understatement. I remember walking back home with another seminarian, wondering what all this would mean. Changes in the liturgy? The vernacular? Married clergy? Little did we know then the extent of the impact of Vatican II.

First of all, the person of John XXIII was totally refreshing. It was a delight to be there to see him in person. The night of the opening of the council was an indication of his typical way of relating with the Church, the people. The tape of that opening night is being played frequently on “you tube”. “Aggiornamento”/ “opening up the windows” was energizing and exciting. His simple and sometimes humorous approach was really appreciated and enjoyed. He might have been a “transitional” Pope, but what a transition that was! He gave a whole new meaning to the expression “the Holy Spirit is alive and well”!

Between the calling and the beginning of the council, this was the time for theologians/periti to provide information to the Bishops and to the Church and world at large. There was an openness that engaged those needing the information but also anyone waiting for this moment. At our own Oblate scholasticate, by that time at the General House on Via Aurelia, we had visits from a number of theologians, such as, Karl Rahner, SJ, Hans Küng, Edward Schillebeeckx, OP, Yves Congar, OP, and others. Discussions about Church, the People of God, Revelation, Ecumenism, etc. were all the hot topics of the day. This was a wonderful time to be studying theology! Perhaps, we did not realize it at the time, but theologians were rightfully acknowledged for the gifts they bring. There was a real spirit of openness.

Besides the excitement of the council itself, we, the Oblate seminarians in Rome, had the pleasure of living under the same roof with about forty Oblate Bishops from all over the world. We served their private Masses. Remember this was before the changes in the liturgy. They were also called upon to share their experiences and council thoughts with us. Having them with us put flesh on what the council meant and would mean in the future. While they were optimistic, they realized the difficulty ahead of them to bring the reality of the council home to their people scattered all over the world in the far North America, Africa, Asia, Latin America and other corners far from Rome. We know what a difficult task they had to implement the changes and directions of Vatican II.

DEATH OF JOHN XXIII AND ELECTION OF PAUL VI

Thousands paid respect to John XXIII as he was waked day and night at St. Peter’s. His body was placed over the confessional in front of the main altar. Seminarians from the various colleges were called on to take turns during the wake. The OMI’s had some ungodly hour at one or two in the morning. Nonetheless, people continued to stream past his remains.

There was some fear that the Council would not continue its same momentum after the death of John XXIII. Paul VI was elected to continue the process, seeing the council to its conclusion.

Looking back at those times during the Vatican Council, I yearn for the openness that existed then. While there were fears, there was a spirit of sharing and trust in one another and the Holy Spirit. Dialogue was expected. The sense of excitement and freshness has certainly faded with suspicions and lack of trust.

While I was not thrilled about going to Rome to do seminary studies, this proved to be a very special time in my life. Being in Rome with Oblates from all over the world and the experience of Vatican II left a lasting impression on my life. Certainly a gift!