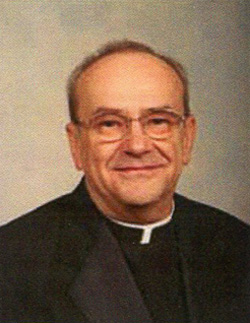 Father Mitch Byeck, OMI, formerly known as Mieczyslaw (“Mietek”) Bajek was born on January 1, 1953 in the city of Stalowa Wola, South-East Poland. Byeck was baptized at St. Florian Church. From his childhood, he recalls wanting to become a priest.

After receiving his 1st Communion, Byeck became an altar boy, serving at his parish church every day until the day he entered the Oblate Novitiate.

He attended High School in Stalowa Wola. Because he was an altar boy, his family had some difficulties from communist authorities.

However, this didn’t stop Byeck from pursuing his profession.  He started his Novitiate in Obra, Poland, and there took his final and perpetual vows.  Byeck would later become an ordained priest.  All of his studies took place in the Oblate Seminary in Obra which is comprised of two years of philosophy and four years of theology. He graduated with a Master Degree in Moral Theology.

The Central US OMI Province invited Byeck to join. When he was 38-years-old he and Fr. Andy Knop, OMI came to Chicago.  The very first year he spent in Chicago at Oblate House of Theology.  The next two years he spent at St. Mary’s Parish at St. Paul, MN learning English and helping in parish ministry.

Three years later, he was in Sisseton, SD starting as parochial vicar, later as a pastor.

Byeck’s next assignment was White Earth, MN, for ten years as pastor in three small parishes.

He is an honorary member of the White Earth Band of Ojibwe Indians.

His next endeavor was two years as parish administrator at International Falls, MN. After The Province transferred the parish to the diocese of Duluth, he came to Buffalo, NY to Our Lady of Hope parish to help Fr. George Kirwin, OMI. There Byeck became a pastor of Our Lady of Hope in 2011 after Fr. George retired.

Our Lady of Hope is indeed a missionary parish, a very Oblate parish:  refugees mostly from Burma and African countries: at least nine different languages, different cultural and religious traditions.

Byeck is very involved in his pastoral duties and being but, says every time he gets the chance he enjoys going back to Poland and seeing his family. Byeck says despite the distance he still makes time to talk on the phone with his mother, sister and brother. One of his hobbies includes fixing computer software and hardware problems.