Sixty-two years have passed since the statue of the Oblate Madonna arrived in the chapel of the General House at via Aurelia 290 in Rome. Bro. Giuseppe D’ORAZIO remembers that he entered the house along with her. 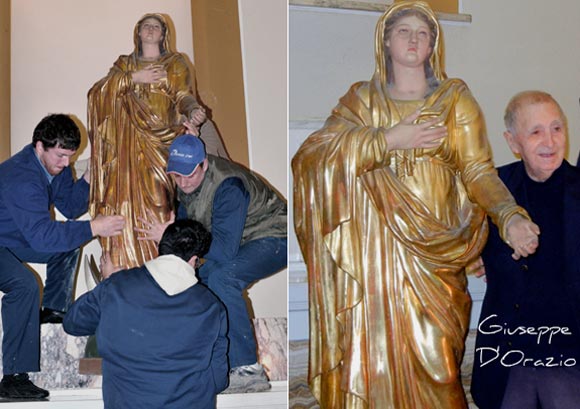 On Monday, December 10, the 180 cm tall statue was removed from its niche over the main altar of the chapel to be brought to the Domus Dei workshop in Albano Laziale where it will be restored. In fact, lesions have been found in the face, hands and feet; there is flaking and abrasion of the gold leaf on her mantle and gown. Furthermore, a thick layer deposits covers the entire painted surface of the statue. It will also be disinfected of wood-eating insects and the wooden frame will be strengthened. It is expected that the statue, which probably dates back to the 19th century, will be back home before next January 25. 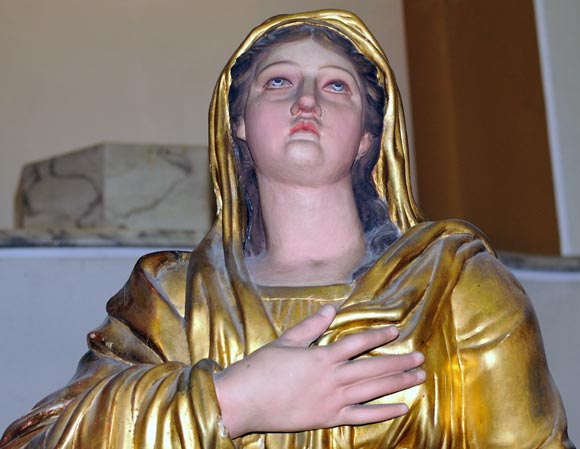 What follows is an excerpt from an article by Fr. Yvon BEAUDOIN in the first volume of the Historical Dictionary:

The statue, the altar of the vows and the heart of the Founder were transported to Rome after the religious expulsions from France in 1903. On June 8, 1908, Father Eugène Baffie, the vicar general, blessed the “family shrine” in the back part of the scholasticate chapel in Rome in which were placed these three important souvenirs of the Founder along with the statue of the miraculous Virgin. (Missions O.M.I., 46 (1908), P. 272-301). In his photo album on Bishop de Mazenod which appeared in 1913, Father Marcel Bernad referred to Father Lamblin’s narrative and added: “We do not know the basis of this tradition.” The tradition as handed down to us by Father Lamblin subsequently appeared several times in Oblate literature, especially in the testimonies of Father Edmond Dubois, o.m.i., and of Sister Veronica of the Sacred Heart of the Sisters of the Holy Family of Bordeaux given in the course of the ordinary process of the Founder’s cause in 1928 (Positio super introductione causae… Rome, 1935, p. 705 and 716), in the review La Bannière de M.I., Ottawa, 41 (1933), p. 31 in the work of Father Léon Hermant, Le Serviteur de Dieu C. J.. E. de Mazenod, 1936, pp. 64-65, etc.

The tradition has plainly enriched with details that which Father de Mazenod termed “a special experience that I felt today, I will not go so far as to say more than ever, but certainly more than usual. I cannot describe it too well because it comprised several things but all related, however, to a single object, our dear Society…”Oblate Writings I, vol. 6 no. 86, p. 93) This communication on the part of the Founder was made to Father Tempier who was always discreet beyond measure and certainly did not share with others this letter of the Founder. This letter, it seems, was found in Father Tempier’s papers after his death in 1870. In 1889, Father Monnet added the first detail: the Virgin smiled at the Founder; in 1904, Father Lamblin completed it by saying the statue opened its eyes and nodded its head in a sign of assent…

In a note on the Virgin of the miracle written up in 1956, Émilien Lamirande concluded: “We are totally justified in speaking of an extraordinary grace received that day. As for the “miracle” properly speaking, however, we have no choice but to relate it to a much later tradition that is rather uncertain […] Whatever one can say about this matter, this day of August 15, 1822 marked an important moment in the life of the Congregation and the fact remains that the statue before which our Venerated Founder returned to pray so often has become for us, as Father Rey says: “one of the most precious souvenirs concerning the origins of our family.” (Rey, I, p. 280)

On February 2, 1933, this statue which was in the sacristy of the scholasticate was transferred to the General House chapel on via Vittorino da Feltre. Since 1950 it is placed above the main altar in the chapel of the General House on via Aurelia.