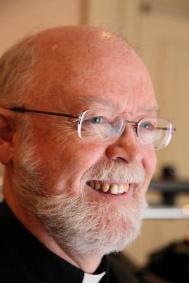 Curiously, the prayer at the opening of today’s celebration speaks about our renewal through Christ not so much about the Baptism of the Lord. The first option for the Collect says: “grant that your children by adoption, reborn of water and the Holy Spirit may always be pleasing to you.” The second option says: “grant, we pray, that we may be inwardly transformed through him whom we recognize as outwardly like ourselves.”

In these prayers, then, we learn both something about Christ and something about ourselves. This amplifies what God said in Isaiah, when speaking about the One who comes: “A bruised reed he shall not break, and a smoldering wick he shall not quench until he establishes justice on the earth.”

That refers to the wonderful generosity of God. Our natural inclination is to step back from Jesus’ Baptism and let it leave us untouched. But according to Isaiah this was the beginning of the justification of the world. The world that we live in! And Jesus Christ is the one who (following Isaiah again) is the “light for the nations.”

Now, we could just stop right here – because so few of us actually believe this. Are there any nations following this teaching? The government of the Philippines, a once profoundly Catholic nation, recently signed into law the permission for contraception. They did it secretly because they knew that what they were doing was wrong. But it is done.

What has long been forgotten in the United States and was discarded in the Philippines as in so many countries is that Christ came to show us what humanity can really be: not lying and deceptive, which we do outstandingly well without his help, but open to and capable of the greatest good with his help. This is the justice of the Lord spoken of by God in Isaiah.

The two possible Collects for the feast speak in different ways about our transformation. Not the kind envisaged by the Philippine government because they wanted to allow people more latitude to sin. (As a sideline, they were doing this on the assumption that the government knows best and is fully entitled to do social engineering. Odd idea of government!)

On this feast we hear of our being transformed to choose the good and avoid evil, not merely being transformed to find more evils to do. Choosing the good makes for better human beings. But this message has become as muffled in the Philippines as it is here because the bishops generally do not know how to speak to their people – and do not reach most of them.

The transformation that the prayers speak of is spiritual and temporal. It does not start from me deciding to change (the American self-help movement). Rather, it starts from Christ showing us One who is loved by God. He is the Beloved One of God and so he lives out for us the human life that is the life of someone beloved of God.

The poignant thing about Christ is that in his life he constantly had to deal with evil. In becoming a Christian, there is no saccharine living happily ever after until the Kingdom comes. The resignation to daily dealing with evil is totally counter to the progressivism around us. Progressivism says “apply the will,” following current cultural trends, and you will progress into a utopian future. This is a voluntarism that would have made Hitler proud.

But we are coming to the end of the voluntaristic age. It started with the worst excesses of the Enlightenment and has simply gone downhill from there, turning more and more bloody ever since. When you have even many Catholic clergy and religious, for all practical purposes, condoning 3500 abortions a day, normal people realize that there is something radically wrong with society and the Church.

We are at the end of an age. What will replace it of course is not at all clear. Love should be the answer but what does “end” even mean? The historian Jacques Barzun says:

it is a very active time, full of deep concerns, but peculiarly restless, for it sees no clear lines of advance. The loss it faces is that of possibility. The forms of art as of life seem exhausted; the stages of development have been run through. Institutions function painfully. Repetition and frustration are the intolerable result.

He has captured the problem – at the end of an age there is the loss of possibility.

In a Christian understanding, it is the widespread denial of the possibility of life in Christ in all of its unimaginable richness. A life of consumption, for example, is so shabby measured against life in Christ. This is where God’s “this is my beloved Son, listen to him,” comes in. God is offering the real possibilities of life.

Bevil Bramwell, priest of the Oblates of Mary Immaculate, teaches theology at Catholic Distance University. He holds a Ph.D. from Boston College and works in the area of ecclesiology.
{jcomments on}
Tweet