Philippe THIERRY is a parish pastor in Pontmain. Some youth of his parish worked hard to get the group “Glorious” to come. What will follow from this effort? (Editor’s note: According to Wickipedia, “Glorious” is a French, Catholic “pop-praise” group whose music is inspired by evangelical churches and is based on biblical texts. It was founded in 2000, after World Youth Days, by three brothers from Valence.)

I am concerned about the role of young people who do not feel very comfortable at our “Mass for the elderly”: to say the least! I have therefore given them a church, just for them, that of the town of “La Tannière,” one of eight churches in the sector. It has become the church for the youth of the deanery. 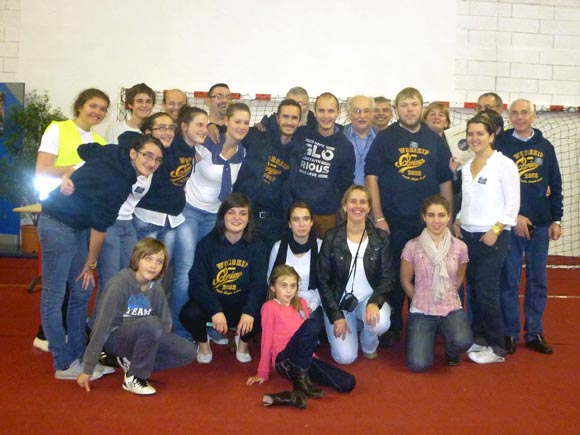 When the “Glorious” group came, the Director of the Ernée School willingly agreed to loan them the school’s gymnasium! 900 seats! So things could move forward. Parents and friends got together with the youth to organize things: it was no small affair!

Following the arrival of this group, the young people founded the association “Get out of your burrow.” The purpose of the association: to gather youth of the community and surrounding towns, to hold evenings of song and praise, and, I hope, some Masses, some moments of sharing, some concerts, and workshops to develop among them a sense of responsibility. They launched a blog and an email address; in short, it’s something serious!

In the church, the town hall will take out the benches. They will put carpet in the middle, with benches on the sides and at the end. For the Word of God, they can get into small groups and then return to the middle for sharing.

I said: “OK, on one condition: that it is not a flash in the pan. Going to WYD, bringing in ‘Glorious’, that’s great. But if there is nothing behind it, it’s a shame!” So I think they will go to “youth style” Mass at La Tannière, a “Mass that takes its time”, with their own songs, with body movement, with different themes each time: the covenant, forgiveness, the Word …

The first major gathering to be held at the church of La Tannière was to prepare for Christmas. It was the young people themselves who wanted this gathering, “to prepare their hearts to receive the Savior”. They had, of course, their own songs, but they wanted a penitential celebration. I told them what there was at the parish and the basilica, with either general or individual absolution. They wanted to do it together with other youth at a time when they could easily come and with a personal encounter with a priest. I was astonished.

As they say: “It’s got to budge”. Well, OK! The association has other projects in mind, including going to Taizé, having a faith revival, a pilgrimage to Lourdes … I think it is the young who will bring their parents along. (Audacieux pour l’Évangile, January 2013)