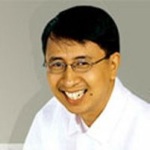 A few months ago, God refreshed me. I was invited to give a retreat to a group of Missionary priests in Mindanao – the Oblates of Mary Immaculate or OMI. Believe me, these guys were the real Indiana Jones.  But they weren’t searching for earthly treasure.  They would go to the farthest, the most dangerous corners of the planet to find another kind of treasure: The forgotten person that needs their love. I am not surprised that Pope Pius XI referred to them as “the specialists of the most difficult mission in the Church.”

These rugged men live in the most treacherous parts of the country.  Four of their brother priests have already been killed, some tortured, Fr. Nelson Javillana, Bishop Ben de Jesus, Fr. Benjie Inocencio and Fr. Rey Roda. Yet instead of getting scared, they’re emboldened to serve God even more. Some of them receive death threats regularly.  And escaping kidnap attempts is already a way of life for them.

I met priests who ministered in war-torn Jolo.  One of them worked there for 13 years.  Fr. Romy Villanueva is already 74 years old, yet I still saw passion burn in his eyes.  “I can die in Jolo,” he said to me.

I met priests who lived in the string of tiny islands in Tawi Tawi.  One of them, Fr. Raul Biasbas has been serving God in that place for 15 years, living with the indigenous people there—the Badjaos and Samals (sea gypsies).  These priests would ride a boat to visit the few very poor Catholics in each of these islands.

I met priests who worked in Jolo during the all-out war. One priest, Fr. Romy Saniel, told me that he was visiting sick people on first Friday when all of a sudden, he felt the cold metal of the nozzle of a 45 caliber pointed behind his head.  “Click!”  He heard the man pull the trigger.  But by God’s miracle, the weapon jammed. And that day, he lived to tell this story to me. Lastly, I also met another priest, Fr. Renan Aban who lived up in the Kulaman mountains, serving the Manobo tribes.

In the morning, I saw these priests, pray in the chapel.  I observed how these priests loved to pray.  They prayed with heart. I guess when your life is in constant danger, you have no choice but to develop a deep prayer life.

And I noticed how humble they were.  Exceedingly humble.  Let me explain why I know.  It was my fellow preacher and Feast builder of Sta. Rosa and Binan, Jon Escoto, who gave the entire retreat.  I just gave one talk in the program.  So before going there, I asked Jon, “What topic do you want me to give?”  Jon said, “Give a talk on No Fear.”

So when I arrived at the retreat house, not knowing yet the stories I told you above, I preached to them about “going out of your comfort zone and going into your courage zone”.  Later on, I realized how silly my talk was to them.  Because here I was, living in the comforts of Manila—while they were out there in war-torn areas, living in their courage zones 24 hours a day.

But these priests—battle-worn and battle-scarred—listened to me like I was the brave one. A few of them were in their sixties and seventies (the oldest among them was 80), yet they sat in front of me like little children, drinking in my every word.

They were happy men. Why?  Because their hearts are filled with love. I believe their Heaven starts now. This is why I love giving my message today: Because to these Missionary priests, no Earthly Reward is enough to motivate them to do what they are doing now.  It can only be Eternal Rewards.

They love Jesus.  He is their Reward. This verse has become their life: But one thing I do: Forgetting what is behind and straining toward what is ahead, I press on toward the goal to win the prize for which God has called me heavenward in Christ Jesus. (Philippians 3:13-14)

It’s Your Turn: Where Are You Living Now? You’re not a missionary priest in Mindanao. Perhaps you’re a Call Center agent in Manila, working hard so you can send your kids to school.

Or a Nurse on night shift, working overtime, so you could support your mother’s medical bills.

Or an Entrepreneur, trying hard to prosper your business, so you could give extra benefits to your employees.

Or a Father of two kids, playing with them even when you’re tired, because you want to tell them how important they are to you.

Or a Mother of three, working in the office by day and cooking and tutoring and cleaning by night, sacrificing your life for your family.

If you live a life of love, you’re now living in Heaven. Keep loving.  Keep serving.  Keep giving. Because Jesus is your biggest Reward. May your dreams come true.