Originally published on the Chicago Tribune. 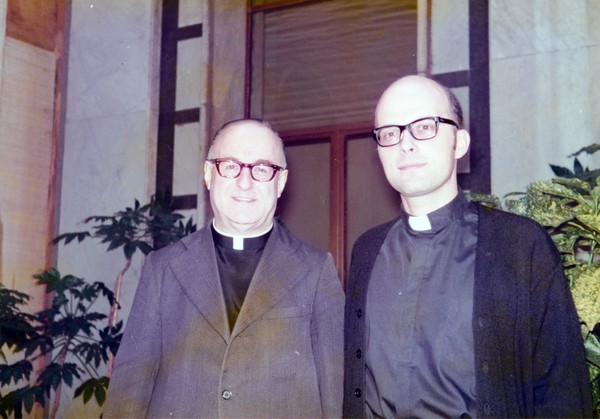 The 115 Roman Catholic cardinals who are about to elect the next pope took different roads to Rome.

Some prepared for the priesthood as proteges of renowned prelates. Others followed an academic path, becoming scholars of theology, literature or canon law.

As a Missionary Oblate of Mary Immaculate, Cardinal Francis George took a circuitous route, through the poorest regions of Africa, Latin America and Asia. There he encountered missionaries putting their lives on the line to serve the church and confronted the limits of his own courage.

Now the Catholic cardinal from Chicago is about to participate in his second papal election. While his experience of already having voted for a pope makes him a go-to person for novice electors, it’s those years spent in Rome and around the world as an Oblate that largely shape his agenda in the selection of the next pontiff.

“It gave me a good sense of the universal church and the challenges facing the church, and that is helpful as I go into conclave, first of all to figure out who can be a universal pastor,” said George, who served as vicar general, or second in command, of the Oblates between 1974 and 1986. “Secondly, in talking to other electors, you have an opening and that’s very useful.”

George, 76, spent 13 years based in Rome with the Oblates before he earned a doctor of sacred theology from Rome’s Pontifical Urbaniana University, the Vatican’s academic institution that trains missionaries. He became a bishop shortly after returning to the U.S., and Pope John Paul II elevated him to cardinal eight years later.

But his work as a missionary continues to define him in the eyes of many. Eight years ago, speculation swirled that Pope Benedict XVI might tap George to return to Rome and run the Vatican’s Congregation for the Evangelization of Peoples. That didn’t happen, though he does serve as the American bishops’ liaison to the Pontifical Mission Societies, a development arm for that congregation and three other Catholic mission groups.

“What is forgotten about him is that he is first and foremost a missionary and member of a religious order,” said the Rev. Andrew Small, national director of the Pontifical Mission Societies and a fellow Oblate. “While an academic and scholar, his thinking is shaped by the way the church is trying to change the world and local cultures through the building of human communities. People can forget this side of his life and his perspective. He has a vast knowledge of the global church and is greatly respected for that. Of course, when a cardinal speaks about the missions, people tend to pay a little bit more attention.”

‘My courage failed me’

Though George hasn’t discussed in much detail his time with the Oblates, the religious order enabled the native Chicagoan to pursue his vocation. Turned away by the now-shuttered Archbishop Quigley Preparatory Seminary after a bout with polio at age 13, he enrolled at St. Henry Preparatory Seminary in downstate Belleville, a high school seminary run by the missionary order. He joined the Oblates in 1957 and followed a primarily academic path, ultimately becoming vicar general in 1974.

In that position, he oversaw more than 5,000 brothers in various mission fields around the world, regularly checking in with bishops to make sure the Oblates were fulfilling their purpose.

George said a series of events shaped him during those years — narrow escapes from a bombing in northern Sri Lanka and from guerrilla warfare in the Philippines and “bargaining for passage, and perhaps for life, with soldiers who controlled the crossroads in the interior of the Congo.” “If the people you’re visiting are visited by violence, you’re part of that experience,” he said. But what moved and inspired him most were the missionaries who served the outcasts of society. In an interview with the Tribune, he described one life-altering moment in Africa that humbles him to this day.

While visiting an Oblate who lived with lepers outside the walls of a city, George declined to sip from a communal bowl prepared and passed around to welcome him to the community. Though he put the bowl to his face, he said, his hosts knew he didn’t take a drink.

“That was where my courage failed me,” George said, his voice shaking as he recounted the moment recently. “I couldn’t drink out of the pot that had been passed around among a couple dozen lepers. But the missionary next to me did. For him, that was his life. … It was a humbling experience. But it’s also an experience that tells you the courage of people day after day after day doing just that. … They put their lives on the line in ways that are difficult for us to imagine.”

‘We were blind and deaf’

George carries that memory wherever he goes — whether it’s encouraging a seminarian to honor his cultural heritage, meeting with a fellow cardinal to discuss church liturgy or heading into a conclave to determine the next pope. He maintains that the church’s teaching and tradition apply across a variety of platforms. He believes God speaks through the poor, and people should listen.

“This is somebody who knows where the church is suffering,” Small said. “I think when he addresses the reality of the American church, he can appropriately put it in context.”

Small remembers George sharing the story of how he was received with shrugs and disdain when he introduced himself in other countries as an American.

“They disliked us — he might have even said they hated us — not because we were rich and happy, but because we were blind and deaf,” Small recounted. “They felt that the problems that they were suffering were met with indifference. … He went around and learned, presumably, and saw this, and that gave him the ability to always think about his reality in the context of how other people are experiencing the same reality. That’s kind of the opposite of being an ideologue.”

But while Americans were treated with disdain, the church often was not.

So far more than 100 cardinals have addressed the general congregation leading up to the conclave that starts Tuesday. Vatican officials won’t say if George was one of them, but he made it clear beforehand that was his intention.

“What I’m most concerned about now, at this point, whenever I do talk, is speaking about the challenges to mission in the U.S.,” he said. “To have a popular culture that doesn’t want to be reminded about the existence of God, that wants to live as if God does not exist, that’s rather new in our history.”

Small said that as a student of Pope John Paul II, George is able to detect warning signs. He connects the communism and fascism that pervaded Eastern Europe to the rapid secularization he now sees in his own country.

“We often think we in the U.S. are unique. Our exceptionalism says we are uniquely capable of confronting challenges and getting through them,” Small said. “The cardinal, because of his international perspective, knows that absolutely that’s not the case. If we’re not vigilant, if we don’t listen to things or insights that he has seen or learned, those parallels might come true here. That’s really the role of a bishop — to guard people, not to catch them when they fall, but to tell them to please step away from the cliff.”

To have at least one cardinal in the conclave who represents the interests of missionaries is crucial for selecting a pope who understands the complex and diverse landscape of the church, said the Rev. Stephen Bevans, a professor of mission and culture at Chicago’s Catholic Theological Union.

“I definitely think it is important for a cardinal or a number of cardinals to have a vision of the church as a ‘world church’ … a church that is made up of a communion of many local churches with their own particular problems, insights and cultural values,” Bevans said. “A cardinal like this will realize that most of the world is poor, that the average Catholic would be a poor Latin American woman, that there are ways of praying and celebrating liturgy that are different from what we know and even feel comfortable with in the United States or Europe.”

George initially met some of his brother cardinals when he served as vicar general and they served as young priests and bishops around the world. Cardinal Wilfrid Napier of Durban, South Africa, served as the bishop of a small rural diocese when he met George in 1980. George had arrived to show solidarity with a brother Oblate who had been charged with security violations under apartheid, the country’s system of racial segregation.

That solidarity has not wavered, Napier said. While George’s fidelity to the Holy See is clear, Napier said, his loyalty to the Oblates is obvious as well. Here was a group that accepted him at an early age and entrusted him with great responsibility, regardless of the rejection he encountered in Chicago due to his disability, Napier said. Church authorities recognized his talents too and followed suit, he said, but the Oblates gave him a valuable vantage point.

“Having been in the highest levels of administration, he would’ve had an overview of the kind of work Oblates were doing in all parts of the world,” Napier said. “It was crucial to his formation and the person he is.”