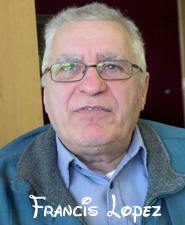 Francis Lopez was very surprised that he would end up as an Oblate associate. He originates from a small village very close to Aix en Provence, Southern France. He knows the town of our Oblate roots and attended school in this town as a boy. In 1963, he and his newly married wife immigrated to Canada, to a country that he hardly knew anything about.

His acquaintance with the Oblates was haphazard. When he was working as a welder in Norman Well, NWT, he heard that there was a priest working as a labourer on the crew. This was an unfamiliar situation for someone who grew up in France. It turned out to be an Oblate, Fr. Felix LABAT. Now they both live in St. Albert, Alberta. “He told me a few stories about the Oblates and that their founder came from Aix en Provence.” It was with pride that he told Fr. Labat, “I was born and raised in that region.”

Francis appreciates his connection as an associate. He describes his time with the Oblate community as an oasis in the desert. “I do not have much to say but what others say helps me. It is big [for me]! This is something I do not find anywhere else. This just strengthens me. The oraison and the sharing in silence strengthen me. It is so powerful.”

Francis came to share in the Oblate charism through his concern for his fellow human being. With his wife, he had established a small business, a deli, in one of the Edmonton malls. It was there that he learned of the difficulties of people having insufficient resources to care for themselves. After sharing his concerns with his parish priest, he was sent to the Marian Center. The next step was to attend a meeting of concerned persons. One step lead to another and he began to be very involved in the foundation and the operation of the Food Bank.

When Francis discovered that he was the youngest person working at the Food Bank he knew that he had to go out and bring in First Nations people and young adults. He successfully recruited a young twenty year old, Gerard Kennedy, who became the first director of the Food Bank. This young man brought many other young adults to become involved in the Food Bank.

Francis’ concern for social justice was not limited to the city of Edmonton. On home visits to France, he promoted the idea of the food bank within that country. He also was very involved with trying to bring food relief after an earthquake in Mexico City some years ago. This food project which originated in Toronto caused many difficulties with local officials in Mexico because of the corruption.

Francis truly has a worldwide heart. He speaks of his involvement in trying to establish an agricultural co-op in El Salvador after the horrendous mud slides in 2001. To establish such a cooperative with farmers, it was necessary to raise money and obtain the necessary resources. This was never to be a charitable handout but was meant to establish a sustaining project that would help these small farmers rebuild their own houses and farms. The final step was to move the farmers into growing coffee which would be a cash crop in that country. It would be then that this cooperative would its goal of becoming a self-sustaining way of life.

Francis identifies with the charism of St. Eugene. It is with open hands that he too reaches out to serve the poor. “Working with the food bank is working with the poor!” (By Nestor GREGOIRE, in www.omilacombe.ca)