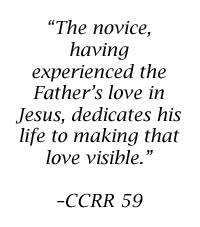 Novice Director of seven years, Fr. Tom Horan, OMI described the significance of the first profession not only for the Scholastics but all Oblates.

“This commitment service is very personal and intimate.  It’s these guys saying, ‘this is my choice and I will do this for a year,’ and their lives as temporary professed Oblates begin.  For the older Oblates that attend every year it’s a good reminder of their commitment and to see younger ones coming in to take their place in the Oblate ranks. […] It’s a day of new generations coming forward and that is always a good thing in a family to have new life.”

Once the scholastics read and signed their written vows to the Provincial and the Oblate Congregation, people gathered at The Shrine Visitor Center for celebration.  The five scholastics performed several songs and led the crowd in a Zambian song and dance.  This comes as no surprise to Fr. Horan, who pointed out the talent of this year’s Novitiate class, not only spiritually but also musically.  “Sergio Gonzalez plays the string bass and has written some of the music for mass celebration.  Sidney is a talented singer and so is Eugene.”

Bro. Eugene Mwape comes from a family of two brothers and a sister.  He has been very active in his parish and prayer groups.  Mwape loves to read and participate in philosophical discussions.

Also from Zambia, 23-year-old Bro. Sidney Sakala, who comes from a family of five brothers with whom he is very close.  Sakala is an extrovert, who loves the arts.  He has painted pictures up in the Novitiate house in Godfrey, writes poetry and sings.  Bro. Sakala’s passion is for youth ministry.

Bro. Victor Manual Patricio-Silva, 35, was born in Acapulco, Mexico.  Patricio-Silva comes from a large family.  He is the youngest of 10 siblings and has a lot of nephews and nieces.  “I met the oblates in Mexico city, I did my pre-novitiate in Tijuana, Mexico. my hope as an Oblate is to serve Christ and the Church with generosity of heart, being an instrument of peace and unity in the world.”  Patricio-Silva is also very interested in youth ministry.  His hobbies are reading, walking and going to movies.

Bro. John Barrientes grew up on the westside of San Antonio in a single parent family with two older siblings.  “I would say that I was raised by four women; my mother, my sister, and my aunts Linda and Estela,” said Barrientes.  His mother and aunts were very involved at their church, which Barrientes would follow in their footsteps.  He became acquainted with the Oblates at a young age, he grew up in an Oblate parish: San Juan De Los Lagos in San Antonio.  There he found a mentor, Fr. Art Flores, OMI.  A friendship formed between the two and Barrientes started to consider a vocation with the Oblates of Mary Immaculate.  He also has done several youth ministry pieces through the Adoration, Community, Theology and Service Retreat Program.  Barrientes wants to focus on helping the spiritually poor.  “The younger audience that maybe spiritual but no religious.  People who believe in God, but don’t see the point of the Church.  Mission with secularity is something I’m very passionate about, and I really want to take that on as a modern missionary,” said Barrientes.

Bro. Sergio Xavier Gonzalez is the youngest in his Oblate Novitiate Class.  Born February 16, 1989 in Midland, Texas, he has an older brother and younger sister.  Gonzalez was a part of Our Lady of Guadalupe Catholic Church, where he was baptized, attended catechism classes and altar served.  Gonzalez spent three years studying philosophy at D’Youville College in Buffalo, NY, participating at Holy Angels Parish, where he learned about Oblate vocations. He entered the pre-novice program also in Buffalo, NY.  He enjoys reading novels, drawing and painting.  Although the men have spent an entire year together, their time has ended and following the celebration Mwape and Sakala will be heading home to Zambia, while Patricio-Silva, Barrientes and Gonzalez return to San Antonio.

“I hope the Zambians take the best of the American culture with them when they return home.  The other three men have been blessed with two young men from Africa, sharing songs, stories and their own culture.  We have grown as an international community and wherever, they go these novice brothers have learned a lot this year,” said Fr. Horan, OMI.

Fr. Horan says it’s a bittersweet feeling, but is excited for their futures.  “I see great hope in these five individuals, tons of energy, talent known and yet to be discovered and talent we hope the other formatters in San Antonio and South Africa will nurture.”