Four young men have taken their first step in the process of discerning their religious vocations last Saturday.  Three of the four have travelled internationally to get to the Novitiate in Godfrey, IL.  The novitiate staff welcomed the candidates who had just arrived a day prior.  After each candidate made his communal request to be admitted to the novitiate, Novice Director, Fr. Tom Horan, OMI presented each one of the men with a medal.  The novices signed papers dedicating a year to learning more about the Oblates.  Following the rite of reception, the new novices and Oblate brothers and fathers in attendance went downstairs for a small gathering. 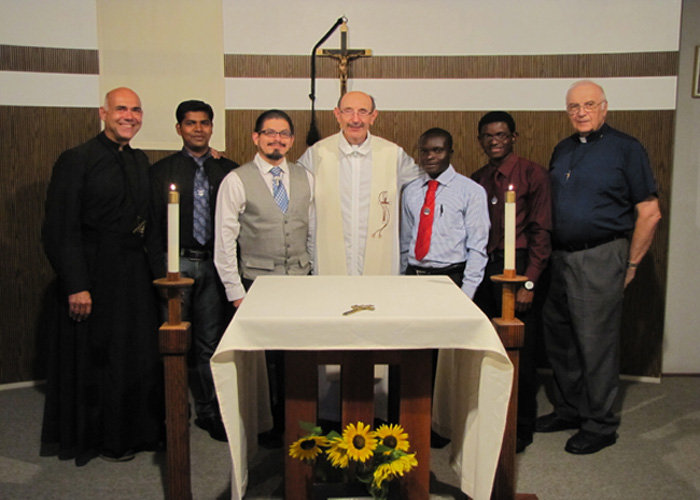 Get to know the new novices. 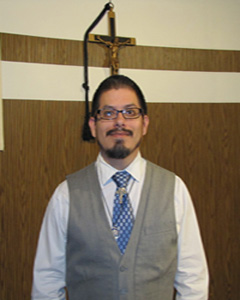 Trevino was born and raised in Laredo, Texas.  He has an older brother and sister.  His family lived with his grandparents and his family was very religious growing up.  They would pray the rosary together and attend mass every Sunday.  He was a member of Our Lady of Guadalupe Parish in Laredo, and that is how Trevino discovered the Oblates of Mary Immaculate.  His pastor, Fr. Ed Vrazel talked about the need for priests.  Trevino entertained the idea, but first enlisted in the navy.  After eight years of service he returned home and learned more about the Oblates through Fr. Richard Hall, OMI.  “I decided to go with the Oblates because what better path to take then with the ones [Oblates] who taught me the faith,” said Trevino.  Although his family expressed mixed feelings about his steps towards priesthood, Trevino says he wants to take this year to hone in on the areas of his life that need reshaping.  In his spare time he enjoys writing poetry and watching the History Channel. 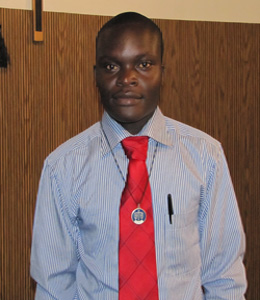 Kunda was born in Samfya, a town located in the Zambian Province of Luapula.  He is the youngest of five brothers and seven sisters.  He described his family as devout Catholics and he attended St. Joseph Parish in Lubwe.  He learned about the Oblates through a “Come and See Weekend.”  After high school he applied to become a prenovice and was accepted.  Kunda says he always wanted to be a priest.  What attracted him to the Oblates was the charism.  “I love the charism and want to work with the many faces of the poor,” said Kunda.  In his spare time he enjoys writing, exercising and playing volleyball.  Kunda describes himself as shy, but he hopes within this next year he will be able to open up and learn more about himself and God. 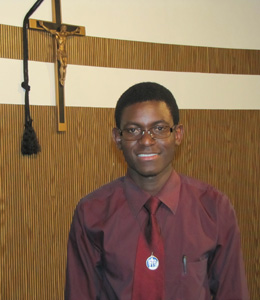 Haakakata was born in Kabwe, the capital of the Zambian Central Province.  He has two brothers and a sister.  Haakakata’s father was the sole caretaker of he and his siblings.  He discovered the Oblates of Mary Immaculate through a friend who was pursuing an Oblate vocation.  He says the Oblate charism was his main attraction to the group of men.  While he is at the novitiate he plans on discerning, learning about himself and having fun.  He wants to pursue priesthood.  In his spare time he enjoys taking walks and listening to R and B music. 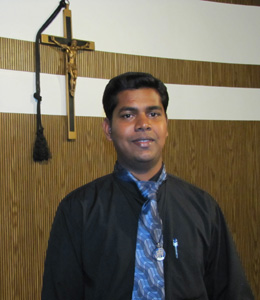 Raja was born and raised in India.  He is the first candidate coming from India.  Raja’s mother raised his brother, sister and himself.  It was also his mother who inspired him to pursue a religious life.  Raja says being a small and close family makes it difficult to leave, but he wants to work with the poor.  His family attended Christ the King Church.  Fernandes hopes to deepen his spirituality and spend more time with the Lord this upcoming year.  Although it is his first time in America, he hopes the other novices can become another family for him.