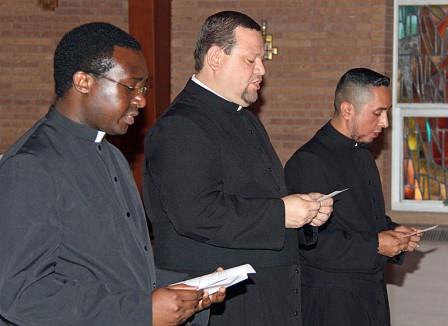 Three scholastics from the Oblate scholasticate in San Antonio professed their perpetual vows on August 31, 2013, at the Immaculate Conception Chapel at Oblate School of Theology: Brother Terence Chota, OMI, from the Oblate Delegation in Zambia; Brother David Uribe, OMI, from Midland, TX; and Brother Jesse Esqueda, OMI, from Los Angeles, CA. The provincial of the United States Province, Fr. William Antone, OMI, accepted their life commitment in the name of the Superior General.
Terence was born in 1981 in Luanshya, Zambia, the son of the late Vincent Chota and Agnes Chota. His mother was able to travel to the United States to join in the celebration, along with his oldest sister, Brigid. Prior to entering Oblate formation, he was an elementary school teacher. He has probably had a more international formation than most Oblates. After his prenovitiate in Zambia, he was sent to Namibia for novitiate (first vows in 2006); he studied philosophy at the scholasticate in Yaoundé, Cameroun, after which he returned to Zambia for internship in the Shangombo parish. In 2010, he went to St. Joseph Theological Institute in Cedara, South Africa, to begin his studies in theology. In 2012, he came to San Antonio to complete his studies.
A native of Seminole, TX, and an alumnus of St. Anthony’s High School Seminary, David was born in 1973, the son of David and Mary Helen Uribe. During his college years at the Oblate formation house in Austin, TX, David decided to pursue a different career. He obtained a B.A. in Psychology and later an M.S. in Organizational Leadership and Ethics. He was employed by St. Edward’s University in several positions, more recently serving as Internship Coordinator in the Career Planning office. By 2004, he was again in contact with the Oblates and in 2007, he decided to enter the formation program in Buffalo, NY.  He made his first vows as an Oblate in 2009 and joined the scholasticate in San Antonio. He recently returned to his studies after a year of internship at St. Stephen Parish in Miramar, FL. 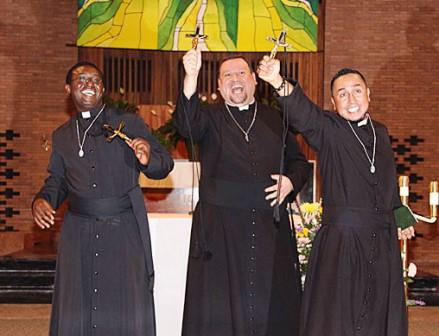 Jesse’s passion for youth ministry and working with the poor led Jesse eventually to the Oblates. He was born in Nochistlán, Zacatecas (Mexico) in 1975, the son of the late Gabino and Evangelina Esqueda. When he was three years old, his family immigrated to the Los Angeles area. After high school, he became active in his parish, helping with youth retreats and eventually serving as a youth minister in a Vincentian parish in East Los Angeles. This led to several stays in Honduras as a lay missionary. Upon returning from a two-year period of service in a diocese in Honduras, he got a job as youth minister at the Oblate parish of Santa Rosa in Los Angeles. He entered the Oblate prenovitiate program in Buffalo in 2007 where he completed a BA degree in Philosophy at D’Youville College. He made his first vows after novitiate in 2009 and entered scholasticate formation in San Antonio. For his pastoral internship, he spent a year at the St. Jude Shrine in New Orleans.
The trio hopes to be ordained deacons on November 16, 2013, along with classmates from Assumption Seminary in San Antonio. 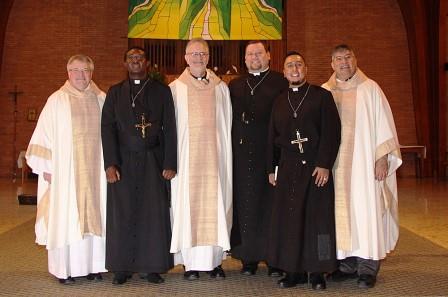