Having been entrusted with the JPIC ministry, we, the JPIC General Committee, wished to renew ourselves in our lives and in our work, in preparation for the 200th anniversary of the Congregation in 2016. First of all, we began with a shared retreat led by Father Raymond WARREN, to make us more aware of our Oblate JPIC spirituality, based on the passion of St. Eugene for Christ and for humanity. 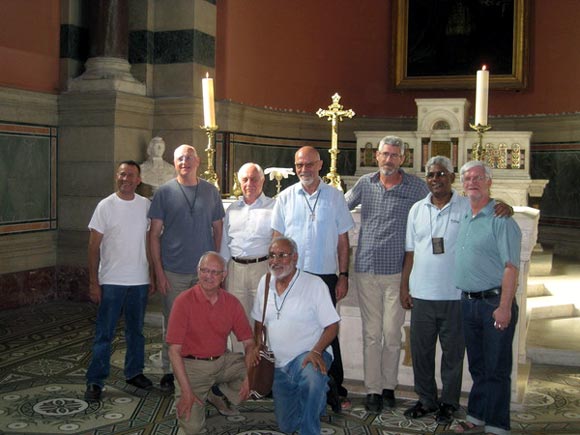 We spent time reading the words of Bishop Bourget, who, upon De Mazenod’s sending six Oblates to Canada in 1841, described St. Eugene as “a man whose heart is as big as the world.” His love, his heart, are still with us, we said, because they cooperate with Christ in his Kingdom. With Brother Benedict DOSQUET and Father Krzysztof ZIELENDA, we visited the birthplace of the Congregation and the major Oblate sites in Marseille. This helped us to see the most concrete dimensions of the spirituality of St. Eugene and how it colored his priestly ministry (by his visits to prisoners, his work with young people, his taking on parish missions…) and his ministry as Bishop of Marseilles (the creation of charitable institutions in his diocese).

During our three days, our group began a process of reviewing the Vade Mecum of the JPIC Committee of 1997. We were very grateful for the major revision of the language already undertaken by the Anglo-Irish Province which has added a more than necessary touch in support of creation, reminding us of the words of Pope John Paul II at the World Day of Peace in 1990 about “the grave obligation to take care of all creation” and telling us that “education in ecological responsibility is urgent and necessary…and requires a genuine conversion.”

We then prepared four sessions for prayer and faith sharing on apostolic community, to be used for local, provincial and regional Oblate communities, as a contribution to apostolic community in the first year of the Oblate triennium. We will also propose a JPIC workshop to be offered in each of the five regions in the next three years. The whole retreat and meeting alternated between moments of prayer and personal sharing. We also had the opportunity to meet the young and dynamic “Oblatas”, also on retreat at the International de Mazenod Centre, including Teresa from Peru and Lisa from Germany who renewed their vows. Still today, the Oblate charism inflames hearts. (Camille PICHÉ in www.centremazenod.org)