Walking into a group of 70 strangers who had known each other from school or previous pilgrimages was intimidating.  I was traveling with the UK group and we had an additional five hours or so to catch up to the Dublin group.  We arrived to the Hotel St. Etienne after everyone had been seated for dinner.  As soon as we walked into the dining hall people ran to hug a few from our group who had been going for years.  You could tell this was a tight knit group. 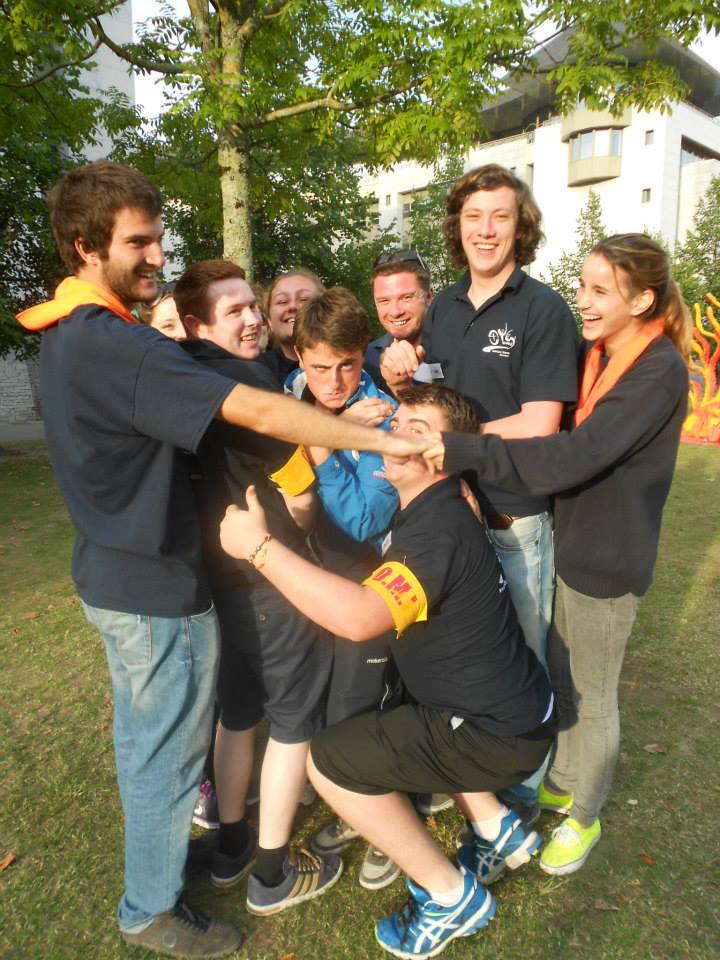 There were even some relationships built from meeting in Lourdes.  This year in particular two of the volunteers, had recently gotten engaged to one another.  They had met through the Oblate Youth Service several years ago.  It was hard to believe that so many friendships and relationships started through the OYS.  Yes, some had gone to the same college and some brought family members, but that was a minority of the 70 people there.  Mainly people had bonded from the week of being together and just kept in touch until they returned the following year.  The Anglo-Irish Province even has reunions at the end of the year.

Being from St. Louis, I usually would initiate a conversation with, “What high school did you go to?”  However, that question was useless in France.  One, it’s not a normal conversation starter if you’re not from St. Louis and two, I would have no idea where that high school would be if I was given a response to my question.  Despite my awkwardness, everyone was welcoming and curious to how I got involved in pilgrimage.

I shared a room with two other girls, one who had been to other pilgrimages with the Oblates, but not this specific one and the other who had been on the OYS’s Pilgrimage several times.  I had met Anita the night before we left London and we got along very well.  She was an occupational therapist, so volunteering at the pilgrimage was similar to her job.  We both bonded on being first-timers in a sea of veterans.  Our other roommate had not arrived until the day before the pilgrims arrived.  She also happened to be getting married the week we returned from Lourdes, brave girl.  She was very petite, but her personality and laugh, in particular, were very large.  People knew Alexa was somewhere near when you could hear her laugh.  Alexa and Anita were in their early thirties and I looked up to them for guidance.  Jokingly I would refer to them as my mothers.

What really brought the group together was spending time at the Café Au Roi Albert.  Regardless how long the days were it was ritual to meet there for what Fr. Peter would refer to as a “cup of coffee.”  Now the café itself was nothing special, a tiny pub squished in between one of the many souvenir shops and an ice cream parlor, but it was perfect.  We all would have a drink or two, but it wasn’t about drinking itself. It was about unwinding and talking about the day with people who experienced the same thing.  Meeting at the Roi Albert was like group therapy for all the OYS members.  At the hospital, your main priority is to focus on the guests and often times you aren’t even aware of who is around you.  Having a pint at the Roi Albert was a way to get out of work mode and just get to know one another.  About four of the Belvedere College boys played their guitars regularly for the group.  You knew the night was coming to an end when the pub would start to sing anything from Mumford and Sons, Amy Winehouse and traditional Irish songs (that I would attempt to hum along too).   The camaraderie that you felt in the bar is something that you can’t find in any American watering hole. 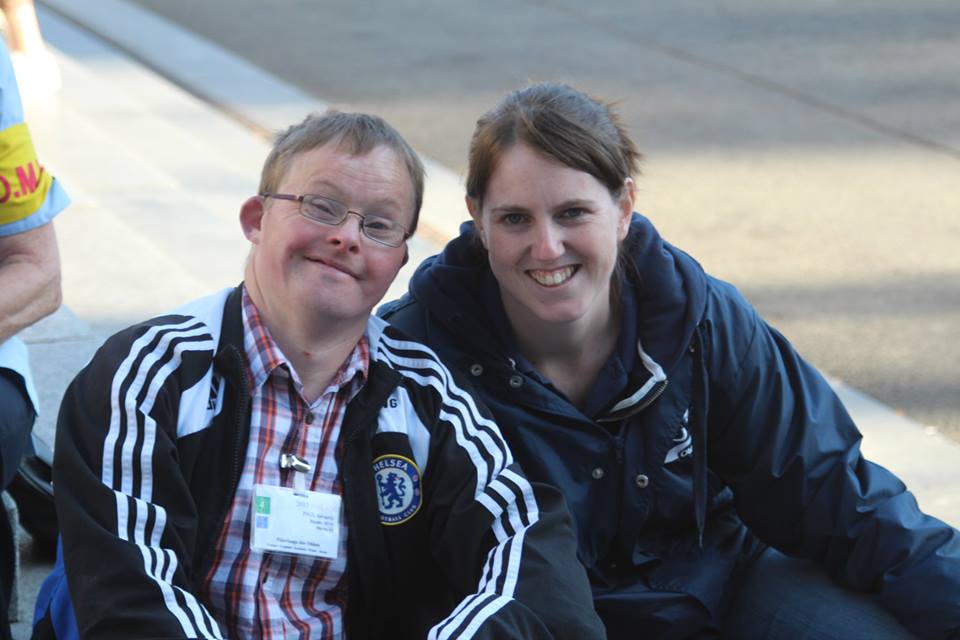 However, it wasn’t just the friendships between the OYS members, but between the guests and volunteers that makes the pilgrimages something unique.   The OYS leadership really emphasized that it wasn’t just about assisting people but taking the time to chat, get to know them and even share a cup of tea (I have never had so much tea in my life before going to Europe.)  You could see how close some of the volunteers had become with the pilgrims who returned yearly.  Many requested for specific volunteers to take them to mass or around the town shopping.  Although I didn’t know any of the guests initially, by the end of the week there were several I found it hard to say good-bye to.  One in particular, Sharon, convinced me to get into the baths.  It was the Virgin Mary who told Bernadette to go drink from the spring and bathe yourself in the water, and this is why the baths of Lourdes are so significant and one of the main reasons why pilgrims make the journey.  I had worked the baths earlier in the week, but didn’t consider getting one partly because I was uncomfortable undressing in front of strangers. 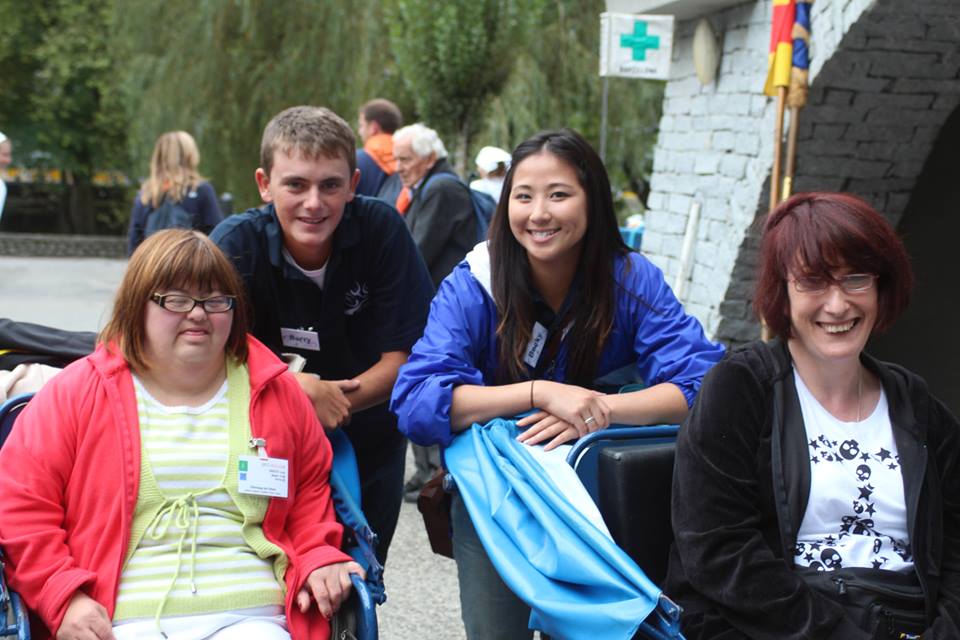 After waiting in line with Sharon for 30 minutes, I changed my mind and before I knew it I was stepping into the marble tub walking towards the Virgin Mary statue.  I knew if Sharon hadn’t made me reconsider going into the baths, I would’ve regretted it.  The friendships you make with the guests are of mutual benefit.  Every guest I met taught me something interesting about Ireland and why they would come to Lourdes.  For some, keeping track of the trips to Lourdes required more than two hands.  Many would come with family members, and some would travel for those family members who are no longer here. 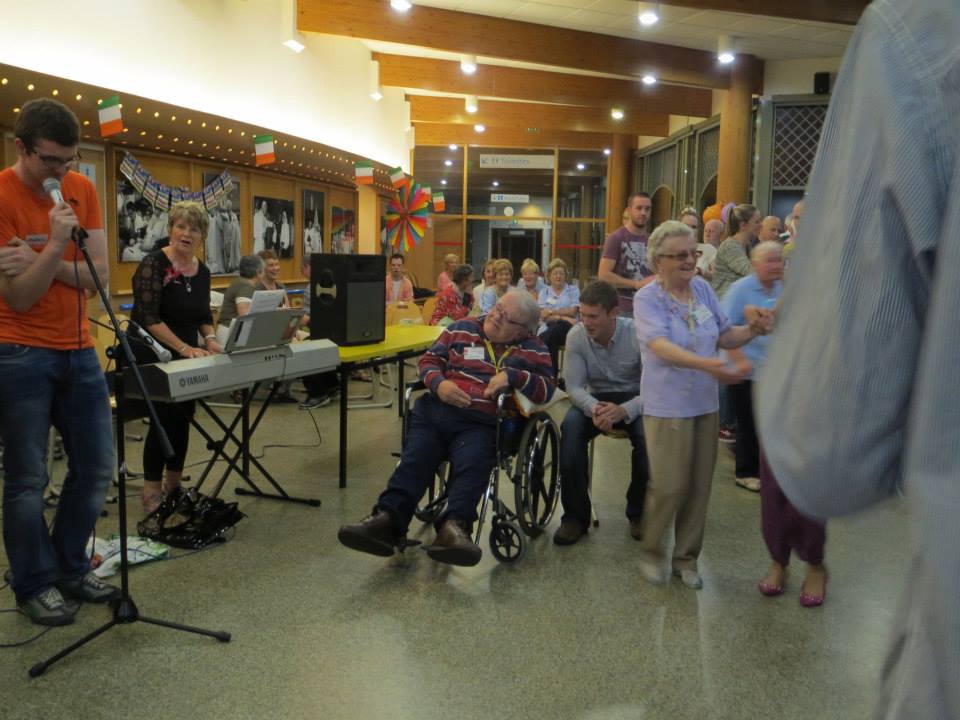 On one of the final days of the pilgrimage there is a party for all the guests.  The fifth floor of the hospital is covered in streamers, banners and tables are filled desserts and treats.  It’s one of those times when the guests and OYS members get to unwind together; we wear our regular clothes and celebrate as the Irish do, with song and dance.  The music and dancing went on past many of the guest’s usual bedtimes.  Again I pretended to know some of the traditional Irish songs everyone sang along too.

As I said previously, saying good-bye wasn’t easy.  The morning the guests left, we arrived at the hospital at 5 am.   It was a bit of bread and butter with a cup of tea in the lobby and we were off to either help guests pack, get ready or tidy up the rooms.  We waited with the guests while their buses arrived.  The tone in the room was calm, we could see that the guests were ready to head home, and as for the volunteers, we were ready to head back to our beds.  The days were very long and the exhaustion finally caught up to us that last day, but regardless of how tired we were it never really affected us when we were with our guests.   Occasionally there would be a nodding head or two in a mass, but no one dragged their feet and complained about being tired.  The reason: we all were genuinely happy to be there.

Initially I went to Lourdes to experience and write about it, and now it is something that I want to make into an annual trip too.  You often hear about the Lourdes effect, but it truly is one that you must experience first-hand to understand.