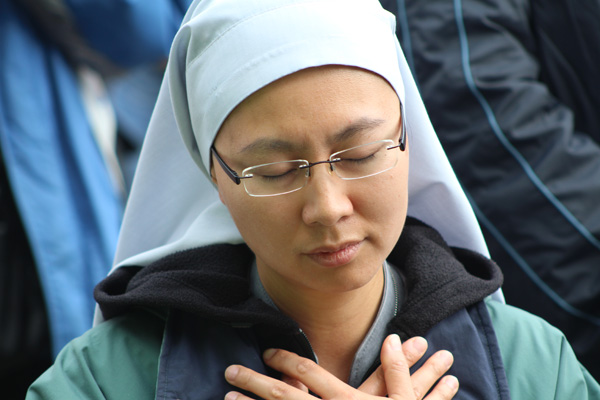 Every year millions of people travel to Lourdes in hope of better health or to pray for loved ones.  Knowing that such a large number of people make this pilgrimage every year is a little surprising to someone my age (23).  Lourdes was a place that my grandparents had made reference too, but not somewhere I would initially think to travel to.  It even seemed strange to me that people would be willing to take a week of their own vacation time or first week of college to volunteer in Lourdes.  The days started around 7 every morning and could go as late as 10 pm and the food was often described with let’s just say less than five-star rating.  It did not fit my idea of a vacation, and left me scratching my head and asking, “Why would these volunteers came back year after year?”  My preconceived judgments about Lourdes came from my lack of faith.

Faith over the years had taken the back burner in my life.  Going to church with my father would become rarer, and not having people to go with while at college made it even more unlikely.  After my father passed away last year, it was hard to have faith in anything.  People always say God has a plan, and I would find myself saying those same words until my father died.  I couldn’t understand why something like this would happen to such a devout Catholic, like my father.   Not only was he religious, but just a good person in general.  Needless to say I was bitter and took it out on my faith, until I went to Lourdes.  This is not to say there was a sudden moment when I walked into St. Michael’s Gate and a light bulb flashed over my head.  It was a gradual realization of what faith means to people and why it’s important to have.  Coincidentally, the pastoral theme this year was, “Lourdes, A Door of Faith.”

I heard about the Oblate Youth Service Lourdes Pilgrimage through Ronan Lavery, Oblate Youth Coordinator from the Anglo-Irish Province, who visited our office in Missouri last year.  While he was there he talked very highly about the OYS Lourdes Pilgrimage and other colleagues had said the same.  I didn’t have a lot of previous knowledge about the famous grotto, aside from knowing sick people travel there in hopes of getting better through the healing waters.  Like many of my peers, I would consider myself more spiritual than religious, but the volunteer aspect really caught my attention.  A few months later I had booked my flight and would be travelling 4,911 miles to meet up with the OYS from the Anglo-Irish Province. 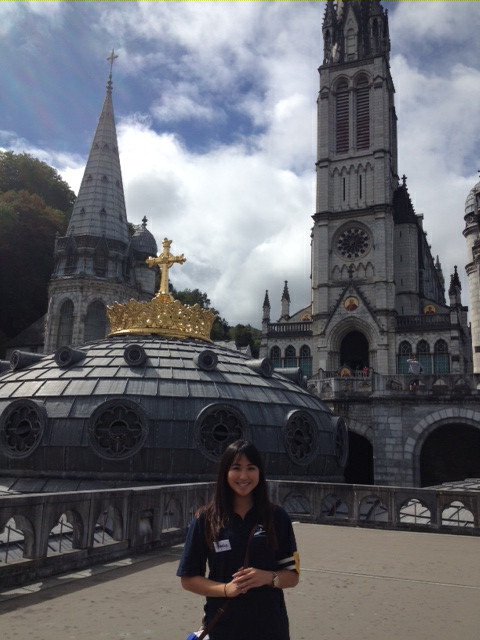 The Oblate Youth Service had the group on a very tight schedule.  Since it was my first time to work with OYS in Lourdes, I was placed on the second shift so my days started around 7 am.  The more experienced OYS members started their days working the first shift meaning they woke up an hour earlier with no breakfast until our shift had arrived.  Typically we would start the day with mass at one of the various churches in the Domain.  We would take our pilgrims to and from the hospital, but rather than just drop them off from place to place, we would spend time with them from when we arrived at the hospital until we left.  Our main goal was to get to know the guests.  There were plenty of nurses and handmaids to help them with getting dressed or taking care of them.

Before Lourdes, I would feel sorry for myself because of my family’s situation.  From talking to many of the pilgrims I realized how selfish I had been for wallowing in self-pity.  Many of them were sick or had few family members alive still but you would have never known because of their positive attitudes and perspectives on life.  It’s easy for us to feel sorry for ourselves, our culture cottles us.  People fish for sympathy on Facebook and it’s very easy to get caught up on what’s going on in our own lives that we forget others are going through the same if not worse.

The OYS pilgrimage to Lourdes is a reality check on what you should be grateful for in your life, and when bad things happen, it shouldn’t make you bitter. It’s a humbling experience.

Aside from humility, you may even find yourself having a bit of spiritual conversion.  The atmosphere in Lourdes is unlike anywhere else because everyone is here out of good intentions, whether it is to pray for better health, help others or to deepen your sense of spirituality.

The OYS leaders emphasized taking personal time to reflect down at the Grotto.  I made two trips there alone.  One of volunteers described going down to the Grotto at night when no-one was around as a head rush of emotions, an overwhelming sense of gratitude comes across when being in the presence of Our Lady of Lourdes, and I couldn’t agree more.  He said it is something he does every time he makes the pilgrimage to Lourdes.

After spending a week in the little town tucked away in the Pyrenees Mountains, and having two weeks to reflect on it, I still find the experience hard to put into words.  However, I found the answer to why volunteers routinely make the pilgrimage to Lourdes.  Simply put, it’s faith, but faith is something that can’t be translated through words.  There’s a quote from the 1943 movie, The Song of Bernadette that goes “For those who have faith, no explanation is necessary. For those without faith, no explanation is sufficient.”  I may not have seen one of our guests encounter a physical miracle, but the experience left me with a renewed sense of faith that doesn’t require proof that something special goes on here year after year.

Click here to read part one of my Lourdes Diary and to see the slideshow.