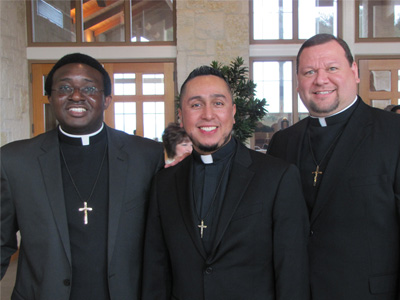 Bros. David Uribe, Jesse Esqueda and Terence Chota took one step closer to priesthood Saturday Nov. 16 at St. Anthony Mary Claret Catholic Church. The three Oblates were ordained to the Diaconate along with four other young men in San Antonio.

Bro. David Uribe grew up in the small farming town of Seminole, Texas. He is the middle child and has two sisters. Growing up Uribe attended Spanish mass regularly and the Spanish language has a special place in his heart. He went to high school at St. Anthony’s and continued his education at St. Edward’s University in Austin. Uribe took a break from formation to pursue career counseling and develop his professional career.  In 2004, Uribe had a renewed sense of faith at an Oblate Parish and realized he wanted to continue a religious life. Fr. Charlie Banks, OMI helped Uribe with his discernment and in 2007, he left his former life behind to join the prenovitiate in Buffalo, NY.  “I’ve received so much support and affirmation.  I get this from the Lord.  I couldn’t see myself doing anything else,” said Uribe.  He was chosen by his fellow deacons to be the deacon of the Eucharist at the Ordination.  He hopes to stay in the US Province where he can take on parish work.

Bro. Jesse Esqueda is from Los Angeles. He was born in Zacatecas (Mexico) but grew up in Los Angeles California. His greatest inspiration has been the amazing example of his parents. From his father, who died in 1993, he learned commitment, responsibility and the value of hard work. From his mother he learned the value of faith, strength, and compassion for others. Esqueda has always had a passion for youth ministry. After high school, he began helping youth retreats and eventually worked as a youth minister in two parishes in Southern California. During his time as the youth minister, he visited Honduras several times acting as lay missionary. “I have a special love for the missions. Anywhere where there is a lot of poverty is where I see myself,” said Esqueda. He received a Bachelor’s degree in Philosophy at D’Youville College. Esqueda started his prenovitiate program in Buffalo in 2007 and he will be ordained to the priesthood in May.

Bro. Terence Kasonde Chota grew up in Zambia. After he graduated from high school, he trained as a primary school teacher. Chota started his formation in Zambia and continued studies in Namibia for a year. He studied French and Philosophy in Cameroon also. He has been in three different formation houses. “My whole formation has been very international.  I have been in formation in different parts of Africa, and experienced the church in different areas.  I’ve seen that God is really at work in human creation,” said Chota.  His passion is centered around issues of justice in integrity of creation, human trafficking and human dignity.  Chota plans to return to Zambia for his priestly ordination.

The three young men professed their perpetual vows last year in August at the Immaculate Conception Chapel at the Oblate School of Theology.