Two Oblates have been noted for their atheletic abilities, Fr. Jean-Marie Mouchet and Fr. William O’Donnell. 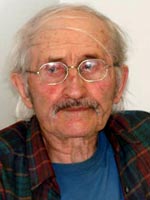 Fr. Jean-Marie MOUCHET was given a special honor just a few days before he died. On November 22, he became the newest member of the Northwest Territory Sport Hall of Fame in Yellowknife, NWT. He received a much more special honor on 2 December when he was called by the Heavenly Father.

An avid fan of skiing, Mouchet was the innovator of the Territorial Experimental Ski Training (TEST) Program, whichwas designed to give aboriginal children physical achievement through cross-country skiing.

In 1955, while living in Inuvik, Fr. Mouchet founded the TEST program. The program soon grew and expanded to other northern communities. Many young First Nations athletes participated in the program, with impressive results. Fr. Mouchet not only taught skiing, he taught youth in Northern Canada the value of challenging themselves and the benefits of determination in order to reach their potential.

Over the years, the fruits of his labour were realized as several athletes from Inuvik found their way on to the national and Olympic teams in the 1970’s.

Born in France in 1917, he was the last Oblate in the Yukon. Most of his ministry was among the Inuit and the Denes.

Currently, Fr. William O’DONNELL is working as assistant to the Secretary General in Rome and as secretary “pro tempore” of the Superior General.

But in his youth at the Jesuit school, LeMoyne College in Syracuse, New York, he was a noted runner on the Cross Country and Track team (1961-1965). In September 2013, he was inducted into the school’s Athletic Hall of Fame.

Among other comments, the inscription on the award he received says: In addition to competing in Indoor & Outdoor track, O’Donnell ran Cross Country his first season on the Heights and served as manager each of the next three years. Serving across campus in a variety of capacities during his time at Le Moyne, O’Donnell upon leaving Le Moyne, entered the religious order of the Oblates of Mary Immaculate where he studied philosophy and theology at the Jesuit-run Gregorian University in Rome. He was ordained in Rome in 1970.