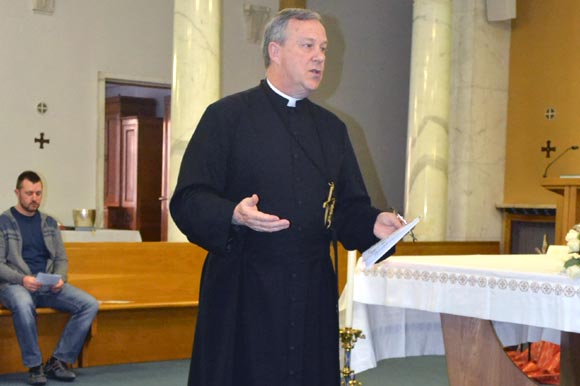 The Oblate Triennium, the three years prior to the 200th anniversary of the founding of the Congregation by St. Eugene de Mazenod, got off to a rousing start with the celebration of the feast of the Immaculate Conception at the General House in Rome.

Close to 60 Oblates from around the world, as well as a number of guests, joined together for the Mass and dinner celebration which followed. Bishop Douglas CROSBY, of Hamilton, Ontario, Canada, was the principal celebrant of the Mass; Superior General Fr. Louis LOUGEN, gave the homily, and the music and liturgical preparations were provided by the students of the International Roman Scholasticate. As always, Honorary Oblate Gina TARQUINI, who worked for many decades at the General House, was a welcome guest, as was Bishop Lionel Gendron, Sulpician from Canada, who accompanied Bishop Crosby.

The Mass began with the blessing of holy water and the signing of each person present with that water, reminding us of our baptism. A small heart with a cross engraved on it was given to each one as a token of the commitment to the renewal the triennium calls forth. 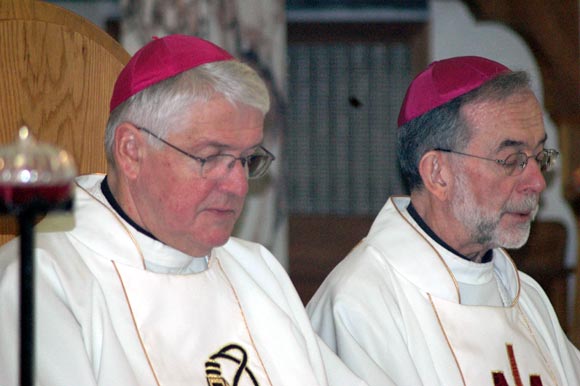 Fr. Lougen, in his homily, highlighted the plan for the next three years, and pointed out the ways in which Mary was and continues to be an example for us in faithfulness. The prayer of the faithful featured a petition from each area of the Oblate world, presented in the native language of one of the scholastics.

During the lunch, under the direction of Fr. Edouard DAGAVOUNANSOU of the scholasticate staff, various national or language groups presented hymns to Mary from their tradition.

As the group dispersed, the challenge of living the renewal called for by the triennium was on the mind of each one, and set the tone for the rest of Advent.