Another year wraps up, and before we start 2014 we wanted to look back at some of the big events and moments of 2013 for the Oblates of Mary Immaculate. 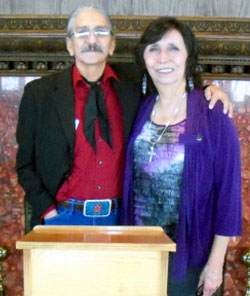 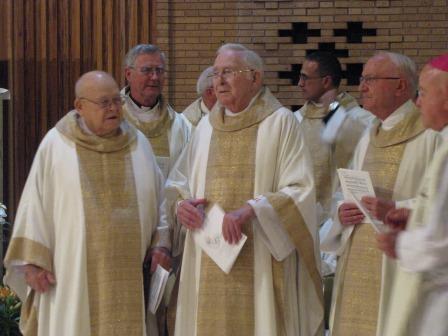 Some 500 Family and friends  gathered with Oblates from around the country at the Chapel at Oblate School of Theology in San Antonio to celebrate the Jubilees of 22 Missionary Oblates of Mary Immaculate.  Altogether, the men who were honored on April 9, 2013 have served the Church for over 1,000 years.  22 Oblates celebrating 25 years all the way up to 70 years were honored with a celebration of the Eucharist and a reception. 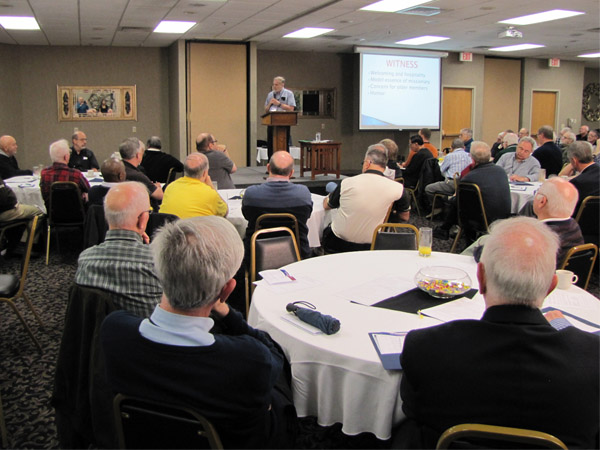 More than 200 Oblates gathered at the Shrine of Our Lady of the Snows in Belleville, IL., last week for the Fourth U.S. Province Convocation. The Convocation theme was, “We are one; We are strong; On fire still” and the meeting sought to continue the process of Renewing the Province Mission. 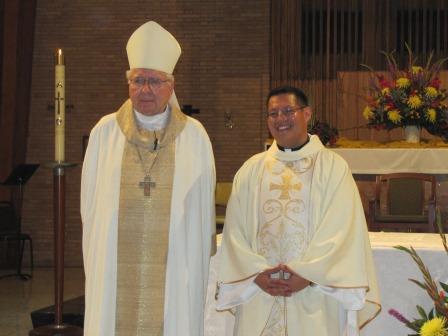 Bishop Gerald Wiesner, OMI, Bishop-emeritus of Prince George, B.C., Canada, ordained Fr. Juan Manuel Gaspar, OMI, on May 17, 2013, at the Immaculate Conception Chapel at Oblate School of Theology in San Antonio. Fr. Juan was born in 1977 in Houston. He is the oldest of seven sons born to Mexican immigrants, Maria and the late Benjamin Gaspar. Before entering the Oblate pre-novitiate in Buffalo, N.Y., in 2006, Juan earned a B.A. degree from the University of St. Thomas in Houston. Following graduation, he taught in elementary schools in Houston. He received his First Obedience to the United States Province from the Superior General. The Provincial, Fr. William Antone, OMI, has assigned him to Santa Rosa Parish in San Fernando, California. 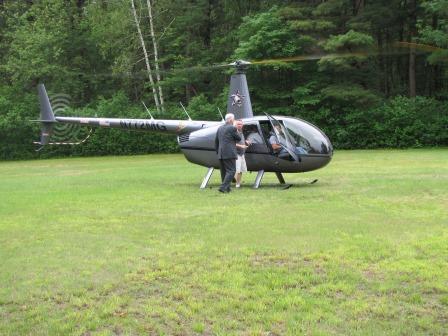 The Jubilarian Celebration for the Northeast and Southeast Areas  took place at the Immaculate Heart of Mary Residence in Tewksbury, MA.  Fr. Wilfred Harvey, OMI was the Principal Celebrant, and Fr. James Flavin, OMI was the homilest. Jubilees of 22 Oblates ranging from 75 years to 25 were celebrated with Eucharist, a dinner and helicopter rides.

Oblatepalooza Kicks off in Zambia 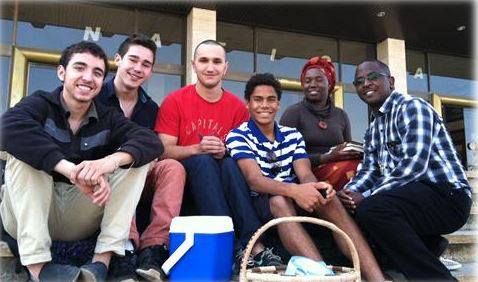 Oblatepalooza is a mission experience for youth that educates and provides a look into the missionary work of the Oblates of Mary Immaculate. Participants were: Liam Kemmy (San Antonio, TX); J. R. Bishop (Washington, DC); Brock Lively (Arlington, VA); and Jose Weinberger (Alexandria, VA). The trip began with two days inculturation and education in Washington, DC by the local Oblates regarding  their approaches to mission.  Following that the four young men went with Fr. Billy Morell, OMI to Zambia.  Fr. Barnabas Simatende, OMI of the Zambian Delegation traveling to Lusaka, Lukulu, Mongu, Kalabo and Kafue Park.  Throughout the trip the boys  visited an AIDS hospice, a radio station, orphanages, a leprosarium and several parishes. 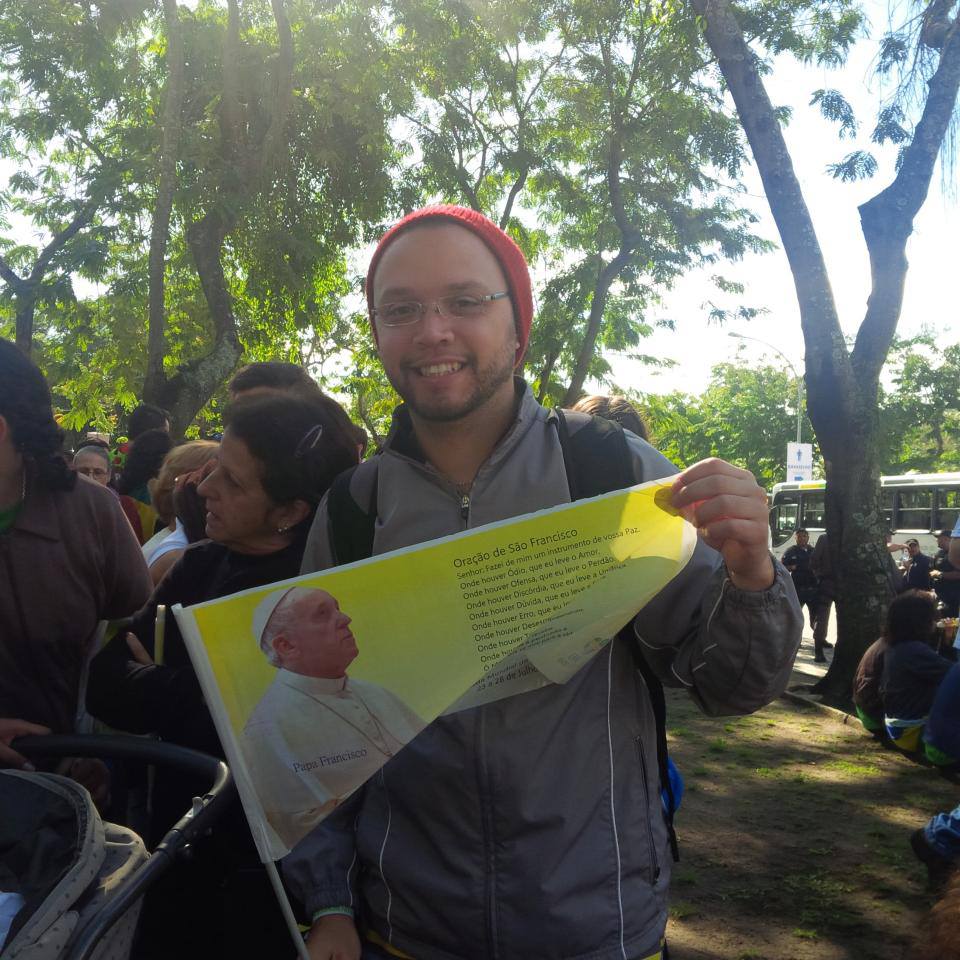 Manuel Romero is a pre novice studying at D’Youville College in Buffalo, NY.  Romero traveled to Rio de Janeiro for World Youth Day 2013 from July 23-28.  WYD includes many activities like catechesis, cultural events and other faith related activities.  The theme of WYD 2013 was, “Go and make disciples of all nations” (Matthew 28:19).  Romero recounts his trip.  Said Romero of the trip, “The International Oblate Youth Encounter was a great experience. Not only did I meet young people from all over the world but I also got to experience the Oblate charism through them. The program was very helpful for us to interact with each other and it encouraged us to embrace everyone as part of a big Oblate family. Jesús was present in every aspect of the encounter.” 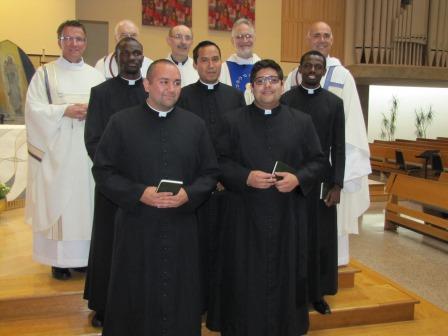 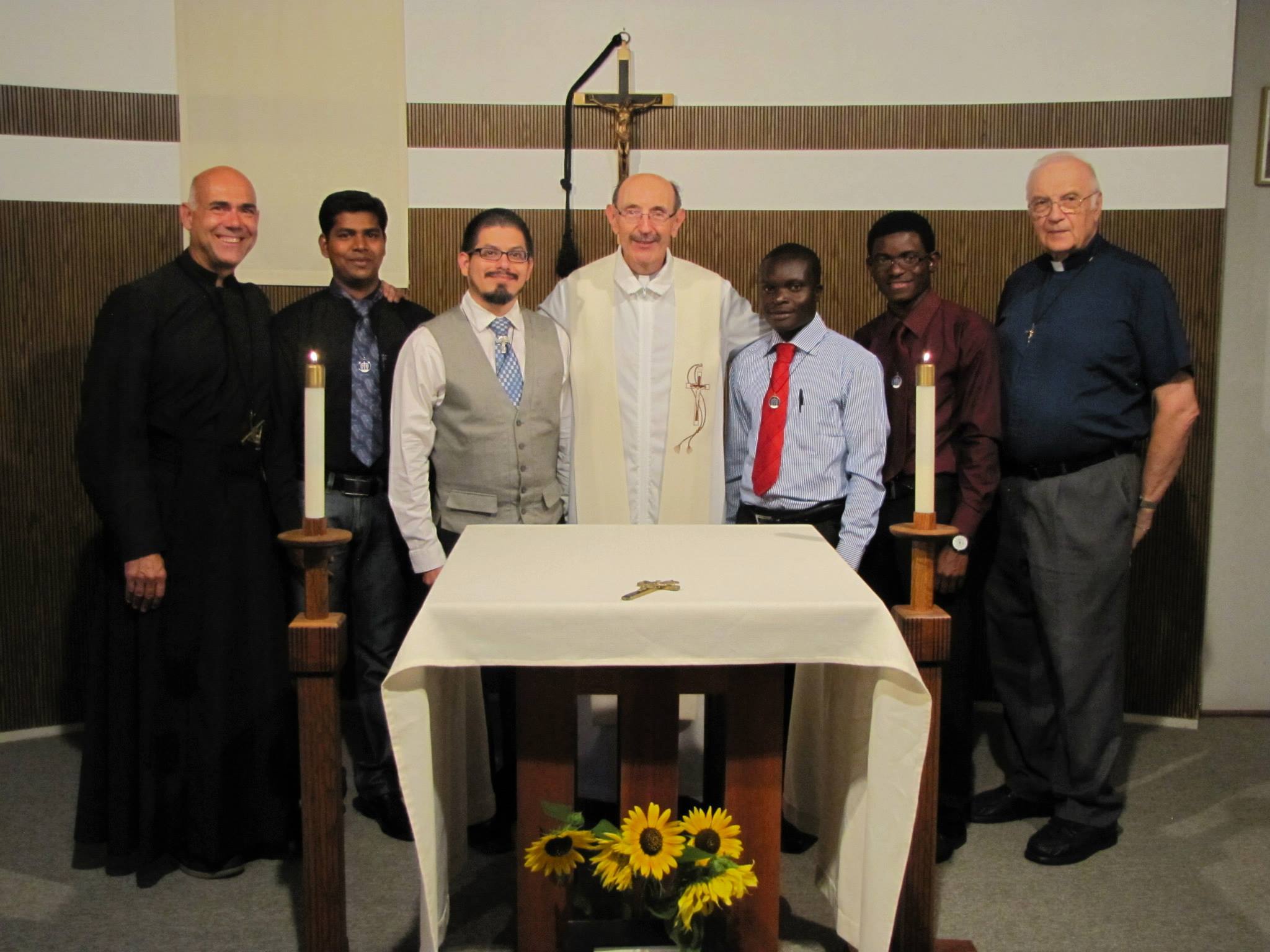 Four young men have taken their first step in the process of discerning their religious vocations last Saturday.  Three of the four have travelled internationally to get to the Novitiate in Godfrey, IL.  The novitiate staff welcomed the candidates who had just arrived a day prior.  After each candidate made his communal request to be admitted to the novitiate, Novice Director, Fr. Tom Horan, OMI presented each one of the men with a medal.  The novices signed papers dedicating a year to learning more about the Oblates.  Following the rite of reception, the new novices and Oblate brothers and fathers in attendance went downstairs for a small gathering.

The four novices are: James Trevino of Laredo, Texas, Nchimunya Haakakata, and Paul Bwalya Kunda, both from Zambia, and the first Oblate novice from India, James Fernandes Raja. 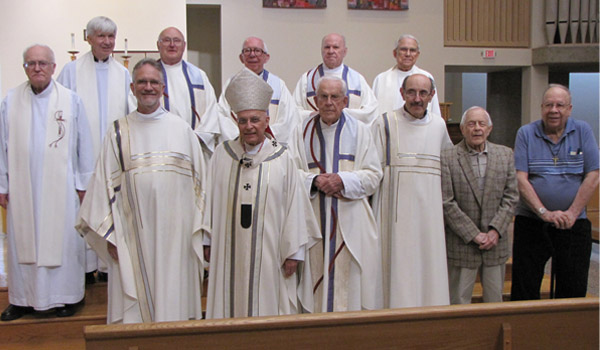 Family, friends and Oblate Associates gathered at the Church of The Shrine of Our Lady of the Snows on September 10, 2013 for a Eucharistic celebration featuring His Eminence, Francis Cardinal George, OMI, Archbishop of Chicago presiding, with a homily by U.S. Oblate Provincial, Fr. William Antone. In addition to Cardinal George, 11 more Oblates commemorated from 70 to 25 years in Oblate life.

Three Oblates Ordained to the Diaconate 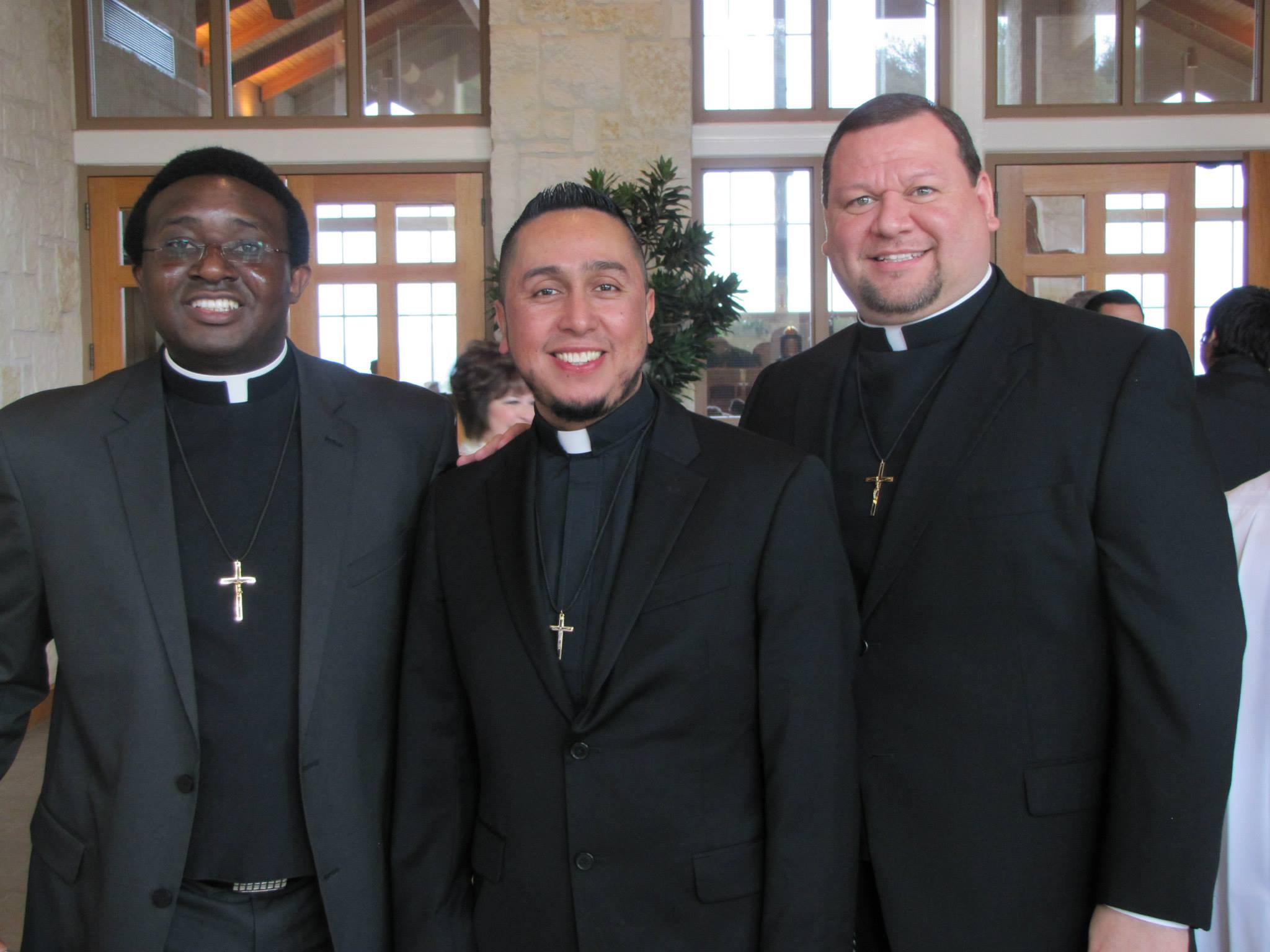 Bros. David Uribe, Jesse Esqueda and Terence Chota took one step closer to priesthood Saturday Nov. 16 at St. Anthony Mary Claret Catholic Church. The three Oblates were ordained to the Diaconate along with four other young men in San Antonio.

Most Reverend Gustavo Garcia-Siller, MSpS, Archbishop of San Antonio, ordained the seven candidates. The three young Oblates professed their perpetual vows last year in August at the Immaculate Conception Chapel at the Oblate School of Theology.

Letter from Superior General Fr. Louis Lougen Opens Triennium on Feast of the Solemnity of the Immaculate Conception As we open the Oblate Triennium, I would like to draw attention to the vital ministry of inviting new members to join our Congregation as priests and Brothers. I do this because, aside from the importance and urgency of continually drawing new life into our Congregation, I have been frequently and insistently asked to speak to the Congregation on this matter, especially by young Oblates from different parts of the Congregation during my visits. Also, the two International Oblate Youth Encounters in which I participated (Malaga, Spain 2011 and Aparecida, Brazil 2013) brought this request to me, as did a letter from the young Oblates of the Conference of the Region of Latin America (CIAL) in February, 2013.

It is with real joy that I respond to these requests and affirm the need for this ministry in every Unit of the Congregation. I promise my full support and that of the Central Government and the General Administration to everyone engaged in inviting young people to become Missionary Oblates of Mary Immaculate, Brothers and priests. I do this not just because I am concerned about declining numbers in the Congregation, but especially because I have seen who we are in the Church and how vital our presence is for the poor. We are fired by a charism that is unique and special in the Church, one that makes us very close to the poor, the rejected, the forgotten, the people that society ignores, and the people who don’t feel accepted in church. We show a very human face of Jesus to the world, one full of compassion and solidarity. I would go so far as to say that our charism lies at the heart of the Church and indeed at the heart of the Gospel itself. We would be remiss if we did not enthusiastically and boldly continue to invite young people to live as consecrated religious missionaries, priests and Brothers, within our charism. Hasn’t Pope Francis captivated the world by doing what Oblates have done for 197 years? 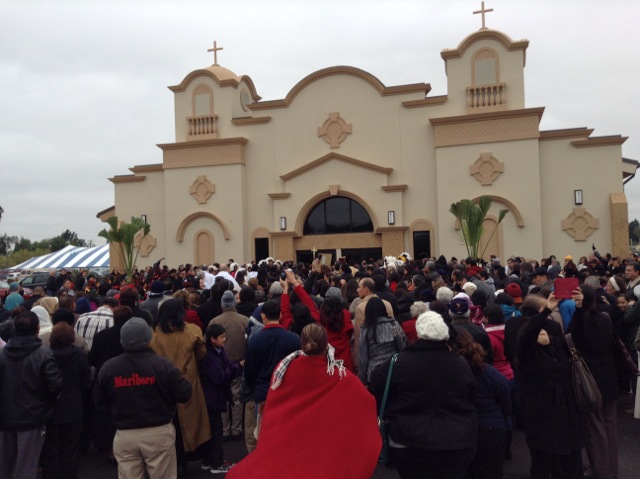 The first parish in the world named for Eugene de Mazenod as a Saint, was dedicated by Bishop Daniel Flores of Brownsville on Saturday December 7, 2013. The brand-new, 550 seat church features an historic, eight-foot tall Oblate cross salvaged from a former Oblate parish in Big Spring, Texas and stained-glass windows commemorating Oblate history in the lower Rio Grande Valley.