During his weekly “Angelus” encounter with the faithful, on Sunday, January 12, 2014, Pope Francis announced the names of 19 new Cardinals for the Church. Among them is an Oblate of Mary Immaculate, Archbishop Orlando Beltran QUEVEDO, of Cotabato, Philippines. He will be inducted into the College of Cardinals during a consistory on February 22. 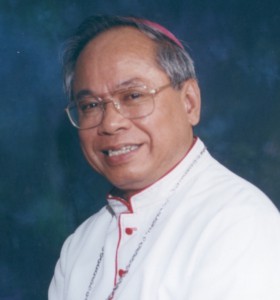 Born in 1939 in Laoag, Ilcos Norte, Philippines, he professed his first vows as an Oblate in Mission, Texas (USA) in 1957. He returned to the Philippines to study philosophy and then returned to the United States to study theology at Oblate College in Washington, D.C. where he was ordained a priest in 1964.

Much of his ministry, prior to being named a bishop, was in education and formation. Among other things, he was President of Notre Dame University in Cotabato (1970-76) and Superior of the Oblate Scholasticate in Quezon City (1979-80). In 1980, he was appointed Bishop of the Prelature of Kidapawan (made a diocese in 1983). In 1986, he was became the Archbishop of Nueva Segovia where he served until 1998 when he was transferred to the Archdiocese of Cotabato. The Oblate Superior General, The Most Rev. Louis Lougen, OMI issued the following statement about the appointment:

“By naming Archbishop Quevedo cardinal, Pope Francis is giving a signal to all of us: it is the recognition of a very committed missionary, a priest and bishop who leads by serving others, whose main concern is the Gospel and the poor and who has worked tirelessly to promote friendship between Christians and Muslims, to support their struggle to live together in respect and peace,” stated Fr. Louis Lougen, OMI, Superior General of the Missionary Oblates of Mary Immaculate , the religious congregation to which Msgr. Quevedo, Archbishop of Cotabato, on the island of Mindanao, belongs.

Fr. Lougen explains: “Archbishop Quevedo is a man of the Church with many gifts and who has always chosen to live simply and whose option as a Missionary Oblate of Mary Immaculate has always been to be very close to the poor. He is a man of compassion, joy and generosity. Pope Francis is showing what kind of Church we are called to be by naming Archbishop Quevedo as cardinal”. The Superior says he is convinced that for Quevedo, this honor at being designated a cardinal is not to be “a prince of the Church” but is a confirmation that the Church, and Archbishop Quevedo’s own life, are “to be like Jesus, a servant who washed the disciples feet”.

“As Oblates of Mary Immaculate we are happy and proud,” he continues, “and rejoice in his being recognized for his prophetic ministry as religious, missionary, priest and archbishop”.

Fr. Lougen concludes with a hope for peace in Southern Philippines: “The process of peace depends on the efforts of everyone. It is my hope that this honor may bring attention to the importance of dialogue, respect and peace-building and may reinforce the commitment of all of us to this process.”

Here is a complete list of the new Cardinals named by Pope Francis on January 12, 2014