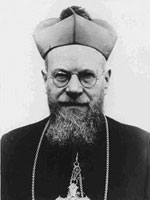 In March 2010, as General Postulator of the Causes of Oblates, I wrote to the bishop of Bayeux-Lisieux to know what was happening with the Cause of the Servant of God, Bishop Pierre Fallaize, a Cause promoted by that diocese. The Chancellor of the Diocese, Daniel Austin, answered me, reassuring me that it had not been buried, but the nun who was directing the work had fallen seriously ill and that the Bishop, Pierre Auguste Pican, SDB, was looking for a new postulator. The new Bishop, Jean-Claude Boulanger, has appointed one in the person of Fr. Raymond Zambelli, who says: “Currently we are totally restructuring the diocesan Commission for this Cause. Bishop Boulanger must appoint new members.” And so it is starting again. That is good news.

Bishop Pierre Fallaize (1887-1964) was a pure-blooded Norman. He was born in Gonneville-sur-Honfleur (Calvados, France). Orphaned of father and mother, he entered the minor seminary of Lisieux in 1899. 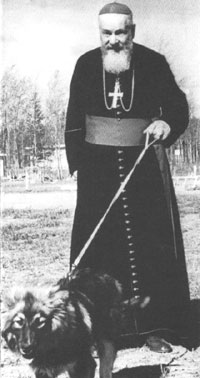 He did his military service and upon being discharged, he followed the steps of his countryman, Bishop Arsène TURQUETIL, the legendary missionary bishop of the Polar Regions. He applied to enter the Missionary Oblates and, without awaiting a reply, presented himself at Bestin (Belgium) to begin his novitiate on 8 December 1906. He made his first vows on 25 December 1907 and was ordained a priest in 1912. The following year, he was sent to the polar missions of Mackenzie, considered then as the most difficult.

Eight years later, he had to submit his resignation because of almost total blindness which he accepted with heroic patience. The Inuit or Eskimos called him “Inúk Ilaranaikor” (the man who never gets angry).

He went back to his homeland and exchanged his episcopal crosier for the white cane of the blind and the “sled” of a guide-dog. For many years, he was a faithful confessor for the Carmelites and the many pilgrims that go to Lisieux: the Carmel and the basilica of Saint Therese of the Child Jesus, his fellow country woman, friend and patron…these would be his new mission fields.

In his old age, he let himself be seduced by missionary nostalgia and he decided to go back to the North Pole where he would give his soul back to God three years later, in Fort Smith, on 10 August 1964.