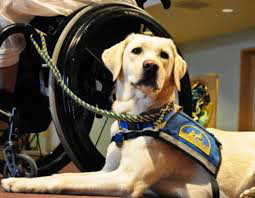 During the most recent O.M.I. Office of Mission Enrichment tour of the Southwestern Illinois Correctional Center, participants found inmates disciplining, not fellow inmates, but puppies.  Eight chocolate and golden Labradors ran around a large municipal room fetching and doing a variety of commands for their trainers, thanks to a new program at SWICC.  The prison inmates have just completed their first quarter of training with the dogs.  The Correctional Center has teamed up with Support Dogs, Inc. in St. Louis.

The program is highly sought after within the Center and only 16 men out of 700 are chosen to work with the dogs, two trainers per dog.  Although it is in high demand, it is a heavy responsibility.  “The men are with their dogs 24/7.  Their kennels are right next to their bunks,” said Assistant Warden at SWICC, Ron Vitale.  The 22 acre property at SWICC is the perfect location for the men  to teach the dogs a variety of basic skills and work their way up to more advanced tasks like, carrying bags and opening doors.  After a year the dogs will go for some further training before they are taken to those who need assistance with mobility-related tasks.

Support Dogs, Inc. comes in twice a week to assist in the dog training.  Lead Trainer, Nadine Wening, believes the program benefits both parties, “It teaches patience, perseverance and how to start and finish something.  For some of these men that is a big accomplishment.”  Wening has been a trainer at Support Dogs for 14 years.

The program got its start at SWICC after hearing about its success at the Federal Correctional Institution in Greenville, IL.  Greenville has worked with Support Dogs since 2001.  The program also has led to jobs once inmates have been released.  “We have had women who have done such a good job with the dogs, we have hired them,” said Wening.

Despite the short time the dogs have been at SWICC, Vitale says it has been a valuable addition to the Correctional Center.  “It’s a restorative justice piece.  These guys are given the opportunity to give back to the community what they have taken out of it.”

The inmates who train these dogs are serving time for substance abuse.  Many of the men have served time elsewhere before arriving at SWICC.  The Center focuses heavily on transitioning back into the real world, once the men are released.