The Oblate Associates of Mary Immaculate of St. Stephen’s Parish, Miramar, Florida, had the pleasure of welcoming Fr. Dan Nassaney, OMI, to their February 20, 2014 meeting. Fr. Dan, who was in town to lead a Confirmation retreat, gave the group an inspiring spiritual talk focusing on the crucial role the laity has played in the lives of the Missionary Oblates of Mary Immaculate. In his talk, Fr. Dan recalled how St. Eugene de Mazenod’s earliest supporters were in fact lay members of the community, in particular the youth, as well as the poor and marginalized men and women of Aix-en-Provence, France, where his missionary work began. 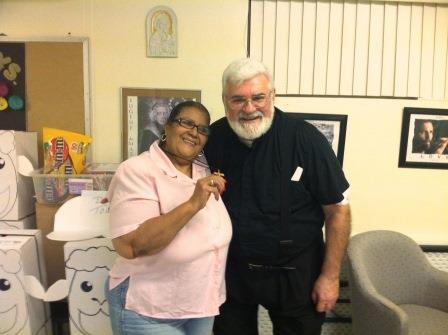 During the moment of sharing, several OAMI’s discussed the various ministries with which the group has been involved since December. While several members of the St. Stephen’s Oblate Associates worked the parish flea market in December to help raise funds for orphans in Haiti, others participated in the March for Life activities, visited the sick in nursing homes, and helped feed the poor through the parish’s St. Vincent de Paul organization.  The group brainstormed about future volunteer possibilities. Fr. Dan reminded the group of the importance of “doing what is possible within one’s means.” He reiterated that each Oblate Associate finds himself, or herself, in a different stage of life and while some can regularly go out to the visit the sick or poor, others may not have that possibility. He added that those who cannot go out to minister can help those in need through prayer, or by simply phoning someone they know who is ill or lonely.

During his visit, Fr. Dan also updated the group on various OMI news items, including the Triennium Celebration, the Third National Gathering of Oblate Associates, and the Annual Novena for Vocations. Fr. Dan encouraged the group to continue sharing the Oblate charism to everyone they meet with a welcoming heart. 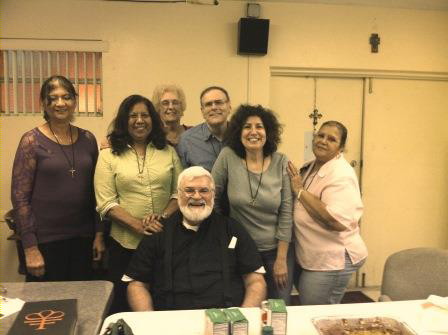 An especially poignant and heartwarming part of the meeting occurred when Grace Cruz, one of St. Stephen’s original Oblate Associates, asked where she could get another cross to wear, ven that hers was no longer in a condition fit to wear. Upon hearing Grace’s question, Fr. Dan immediately took off his Oblate cross and gave it over to her. The whole group cheered and Grace had a hard time holding back her tears! This gracious act is a perfect example of Oblate generosity, that openness that has drawn lay people since the time of St. Eugene to the Oblates of Mary Immaculate and their ministry.

Fr. Dan’s visit was particularly important for this group given that the Oblates no longer administer St. Stephen’s. In July 2013 the OMI’s left the state of Florida to continue their work elsewhere, turning over St. Stephen’s Parish, and three other parishes in South Florida, over to the Archdiocese. The OAMI’s have been meeting frequently since that time, and although it has been a difficult transition, they continue to look for ways to continue the Oblate charism in the parish and beyond. Anyone wishing to follow St. Eugene’s charism is invited to attend the group’s regular meetings.