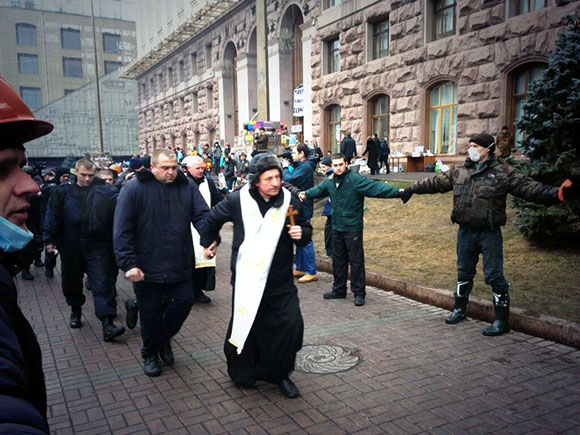 On February 21, from Ukraine, in the midst of a terrible conflict, the Oblate Delegation Superior, Fr. Pawel WYSZKOWSKI, wrote to Fr. Chicho ROIS, the General Councillor for Europe, to update him on the situation.

Already almost 100 persons have died because of the conflict in Ukraine. The fighting itself has, at this moment, ceased, because the president has finally signed an accord with the leaders of the opposition concerning a return to the constitution of 2004, when the president did not have as much power as he has today. The accord has been endorsed by representatives of Poland, Germany and Holland. Unfortunately, Russia has not endorsed it.

There will be presidential elections at the end of this year and in ten days, a government should be formed.

The people, who for more than three months have been on the squares of Kiev and other places, see this accord as a great hope and a way out of the crisis. Three days ago, the statue of Our Lady of Fatima was in the square. The Roman Catholic cathedral, which is a few meters from Independence Square, was taking in various refugees and wounded persons. A hospital in Kiev, led by a Catholic doctor, was taking in gratis many of the sick and was performing surgery gratis. There were 600 more injured persons just in Kiev.

From the moment the conflict became so serious, various religious orders opened their doors for the refugees. Even now, in the monasteries there is continual adoration for peace and in the parishes too, there are liturgies for peace. I have invited all the members of the delegation to do a daily hour of adoration in our houses and, together with the people, to have a complete day of fasting.

The Oblates who offer their lives for the people have not been killed or wounded, but they are helping the people, especially those with no way out; they offer them hope and consolation at the death of their loved ones. The financial crisis and the heavy inflation that now afflicts the country touches us too, but we have confidence in Divine Providence.

There is a beautiful picture in which one can see a priest who yesterday guided by the hand a group of 60 policemen who had been battered for 24 hours of clashes with the people. The priest is “untouchable;” like a child, you don’t kill him who acts as a guide for the people even now. Just a few years ago, 45 thousand religious were killed in our country; today, you don’t touch them. Thanks be to God.

We really hope that Father General will come to visit us. It’s important that we not be alone at this time; before his visit in March, things will calm down. Thanks for your prayers and your support.