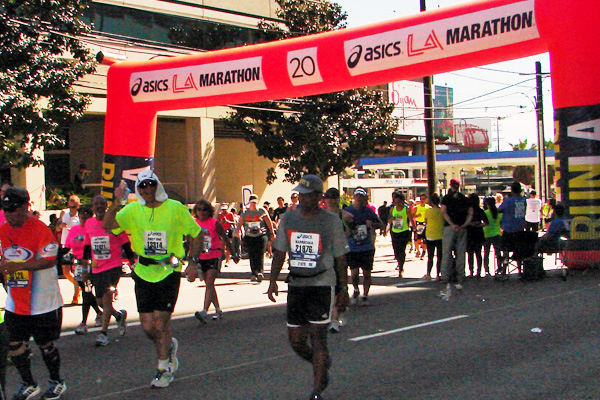 Father Andy Sensenig traded in his winter weather gear and negative temperatures to run 26.2 miles in the sunny state of California on Sunday March 9, 2014 for the LA Marathon.  In just five hours and 38 minutes Father Andy crossed the finish line with high spirits and no injuries – just a few tight muscles.

While making his way from Dodger Stadium to Santa Monica Pier, he had support from fellow Oblate, Brother Craig Bonham.  As an exercise enthusiast himself, Brother Craig cheered Father Andy on from various parts of the course. Father Andy attributes his success to community support from his Oblate family.  “Brother Craig picked up my race materials for me and Father Paul Nourie drove me to the stadium at 4 a.m.,” says Sensenig.  His White Earth Oblate community even fished up enough money for a treadmill for Father Andy to train on.

Since Father Andy has started his training in July he has lost 60 pounds.  The intense workout schedule involved running 40 miles weekly and portion control.   However, he says the biggest challenge wasn’t the diet or distance, but the Minnesota climate.  “Sometimes I would be running in -5 degree temperatures,” says Sensenig.  “I’ve lived and trained in Alaska and Maine and the weather has not been this cold.”

During every race Father Andy says he works off four principles: no injuries, stay grateful, have fun and finish the race.  “Expressing my gratitude is my strategy.  I’m grateful for Oblate family, for being able to run, and for Father Jim Erving.”  It was last year that Oblate Father Jim Erving discovered he was very ill.  Father Andy wanted to not only keep Father Jim on his mind while running, but also on his arm.  He created “4 Jim” bracelets to wear during his races and for other Oblates to wear to show their support for Father Jim.  (Father Jim Erving, OMI passed away on March 18 after Father Andy’s race).

Father Andy also showed his support to fellow runners.  “Every time I saw someone running for a cause, another person, or a legacy runner I gave them high fives,” he says.  Legacy runners have completed every single LA Marathon since 1986.  On the 29th year of the Asics LA Marathon there were a total of 182 legacy runners.

Despite the conclusion of this marathon, Father Andy already has running goals for the future.  Once he returns to Minnesota he plans on resting for a week then starting his training schedule for the Fargo Marathon on May 10.  “I had been on a marathon hiatus for 12 years, so being able to run this [LA marathon] reaffirmed that I can do this.”  Father Andy hopes to someday run an ultramarathon, specifically a 50 mile on the Resurrection Pass in Kenai, Alaska.  One of the biggest tasks Father Andy says will be to find a running partner to accompany him through bear country.