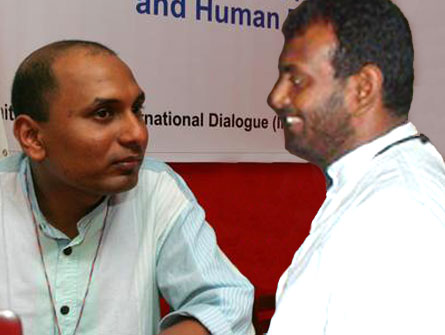 Two Sri Lankan Human Rights defenders who were detained and arrested under provisions of the draconian Prevention of Terrorism Act (PTA) have been now released.Though held for more than 48 hours and interrogated without access to lawyers or relatives ,the respected human rights activists were released without any charges being filed against them

The two human rights activists Ruki Fernando and Fr. Praveen Mahesan who were being held at the Colombo headquarters of the Police Terrorism Investigation Division (TID) were released before midnight at about 11:30 pm Sri Lankan time on March 18, 2014.

Both human rights defenders were produced before the Magistrat at his residence in the Colombo suburb Wattala and formally released.

Colleagues, lawyers and friends of both persons were present to receive and escort Ruki and Fr. Praveen to freedom after their bitter ordeal. Both were in good health and had not been physically harmed during detention and interrogation.

Ruki Fernando is currently serving as Human Rights Advisor to the INFORM Human Rights Documentation Centre based in Colombo. Fr. Praveen Mahesan, OMI is the Director of the Centre for Peace and Reconciliation (CPR) based in Jaffna. Fr Praveen is also the parish priest of the Amaithipuran Church at Akkarayan in the Kilinochchi district. Both members of the Catholic laity and clergy respectively have been actively involved in human rights issues in general and those affecting the victims of war in particular.

Both Ruki and Fr. Praveen were reportedly on a fact –finding mission in the Tharmapuram area of Kilinochchi district when they were taken into custody on March 16 by a contingent of defence officials from both the military intelligence unit of the Sri Lankan army as well as terrorism investigation division officers of the Sri Lankan Police.

After being questioned at Kilinochchi Police station both HR defenders were brought to Vavuniya on March 17 for further questioning. Thereafter they were transferred to the TID headquarters in Colombo and detained on the second floor of the TID office for more interrogation.

The arrests under PTA provisions was condemned worldwide by Governments and Human Rights organizations.

Friends, colleagues and well-wishers of both, along with concerned human rights activists and media personnel mounted an intensive multi-pronged campaign demanding the immediate release of both Ruki Fernando and Fr. Praveen Mahesan.

DBS Jeyaraj can be reached at djeyaraj2005@yahoo.com